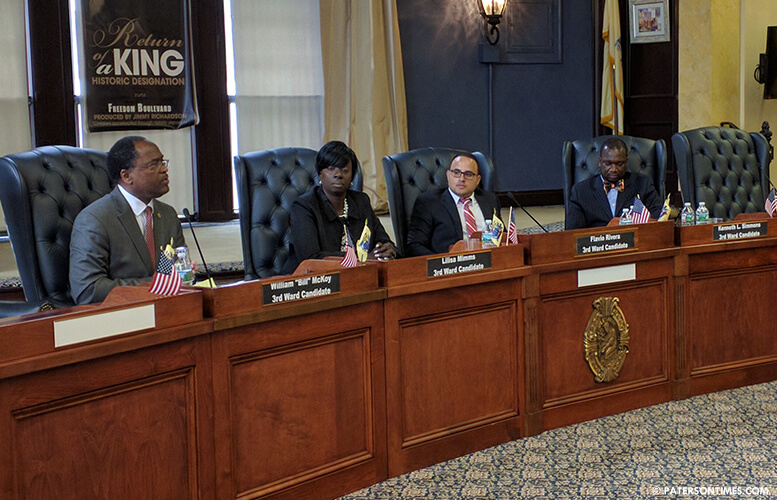 Incumbent William McKoy’s proposal to create employment and generate revenue by starting an in-house garbage collection program rather than paying millions to a contractor received support from all three of his opponents.

“Do we need to bring it in-house? Yes of course, 100%,” said challenger Flavio Rivera. He said the city needs to conduct a cost-benefit analysis to determine whether it is prudent to run a garbage collection program at the public works department.

When asked about a cost estimate for the program, McKoy said the cost has not yet been “flushed out” by the administration.

“A few million dollars here and there should be able to provide the equipment,” estimated McKoy. He said the city can obtain used trucks or enter into lease-purchase agreements to obtain the vehicles just as the fire department does.

McKoy’s plan begins in the city and expands to other neighboring towns through shared services agreements to generate revenue for the municipality.

Rivera and Simmons found fault with McKoy’s response of few millions here and there. “Considering our fiscal condition I’d prefer just a no,” said Simmons.

“If the city was able to make that transition and go to the state plan, I believe it would have been a good move,” said Rivera. He said there are restrictions that hinder towns from moving away from a self-insured plan to the state plan.

“You have to offer the same or better,” said Simmons referring to labor contracts that stipulate a municipality provide certain level of medical coverage.

McKoy and Mimms also agreed the city needed to switch to the state plan. Mayor Jose “Joey” Torres’ administration has indicated it intends to make the switch.

“I’d like to see new housing for middle-income families,” said Simmons. A re-development project similar to the Heritage at Alexander Hamilton or the new Christopher Columbus Housing Homes would do well at the site, he said.

McKoy said the notorious Alexander Hamilton Public Housing Project also known as the Alabama Projects was torn down and rebuilt under his watch. He said a re-developed housing complex with commercial space will fit at the site on Route 20.

“I’d like to see this section rehabilitated similar to the Heritage,” added Rivera agreeing with others.

When asked about what the city can do to offer more recreational opportunities to young people the candidates offered slightly different answers.

McKoy said the city’s school district needs to open up its schools’ gyms to students after school to use for recreation. He noted the taxpayers’ rejection of a recreation trust fund which would have separated recreation funding, which often gets cut in hard times, from the municipal budget. The proposal would have made recreation like the library tax, he said.

At the time the proposal was presented by the mayor, the goal was to increase recreation funding, but it turned into a “fiasco,” when homeowners rose up in protest. The mayor backed away from increasing recreation spending to merely replacing the budget line item with the trust fund.

Mimms said the city needs to utilize grant funds as well as partner with other organizations to provide recreation. She also said churches can offer recreation as well.

Rivera suggested he will reallocate more funds in the budget towards recreation.

“Schools have been open as after school recreation centers, but there’s a cost associated with that,” said Simmons touching on McKoy’s comment. He said there has been a issue in maintaining security.

Simmons said the city can offer recreation without incurring expenses by partnering with nonprofits like the YMCA and colleges.

The candidates also staked out their position on the business curfew which police say has reduced non-fatal shootings in designated areas by 79-percent.

Mimms and Rivera want to decide a hotspot on a case-by-case basis, both said. Neither expressed full support for the business curfew ordinance.

Rivera suggested the ordinance does not effectively address crime. “Just moving the crime to a different area is not addressing the issue,” said Rivera.

“It goes over to the cool spots,” said Mimms. She said crime is pushed from hotspot zones to the more stable areas.

McKoy said liquor licenses are regulated by the state. Rivera said bars require entertainment licenses to open. Those licenses come before the council and can be rejected if the council deems a bar may not be appropriate for a neighborhood, said Rivera.

“I do support the ordinance,” said Simmons. “It should have been city wide.”

“Who are we to dictate when businesses close or open?” remarked Mimms. The business curfew ordinance require shops in crime zones to close at midnight.

The incumbent is a supporter of the business curfew ordinance. The candidates also mentioned ways the city can increase revenue.

McKoy said computerizing the permitting process at the Community Improvement division will lead to more economic development which will increase revenue.

Mimms pointed to placing abandoned properties on tax rolls. She also wants the city to find a way to get other residents, non-homeowners, to contribute to run municipal government.

Rivera said the city should have created a sewer utility to evenly distribute sewer cost to all users. He suggested this will get churches, public buildings, and nonprofits paying more in sewer fees.

As the three challengers delivered their closing statements some took shots at the incumbent.

“What’s he going to do in 4 years that he hasn’t done in 16?” asked Simmons who told three of his opponents he intends to canvas the 3rd Ward neighborhoods with them once elected to the council seat.

“Are you better off today than you were 10 years ago?” asked Rivera to voters in the televised forum.

McKoy lifted a booklet of some of the items he accomplished over the past 16 years to urge voters return him to office for a fifth term.

“I’m the longest serving councilman in Paterson and that’s through performance, through dedication, and through service,” said McKoy.