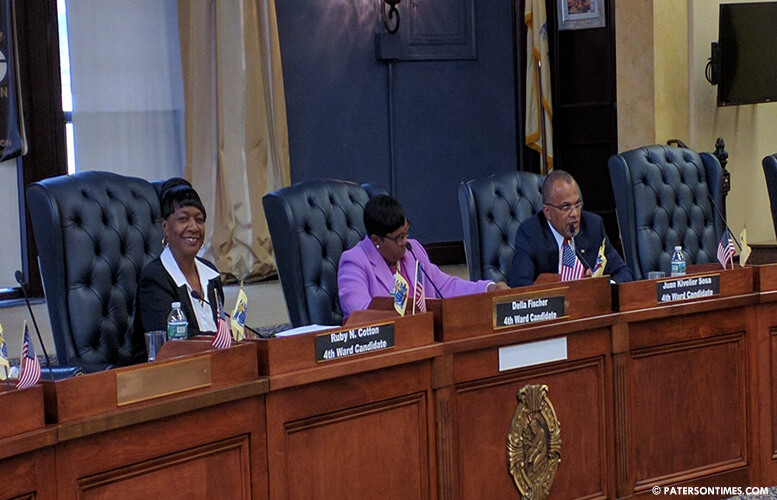 The three candidates for the city’s challenged 4th Ward discussed increasing police presence by utilizing special police officers, limiting expansion of liquor establishments, increasing recreational opportunities for young people, reducing reliance on state aid, and the impact of the mayor’s policies in the ward at Thursday afternoon’s candidate forum at the council chamber.

When the candidates were asked the ways in which special police officers can address the public safety challenges in the 4th Ward, challenger Della Fischer said the specials can patrol the streets to increase police presence.

“I can see them being foot patrol officers so our community can feel the police presence,” said Fischer.

“I’ve not seen them in the 4th Ward yet,” said incumbent Ruby Cotton. “We want them to start patrolling our parks.”

Cotton said the special officers can assist in addressing issues at Rigley’s Park on Montgomery Street.

“We cannot put them in certain places,” said Cotton suggesting it may not be a good idea to have unarmed specials patrolling the crime-ridden streets of the 4th Ward.

Challenger Juan Kivelier Sosa did not provide an answer to the question. For much of the forum he spent time reading extraneous comments into the microphone.

Sosa did have a response when asked what the candidates will do to address troublesome liquor stores in the 4th Ward.

“If we start to close business, it’s a problem,” said Sosa. He said closing businesses, even liquor establishments, may result in some residents losing their jobs. It may also deprive the city of revenue, he said.

“The 4th Ward has made it clear they will not tolerate what’s going on with liquor stores,” said Fischer. “We don’t want that in our community anymore.”

The board voted down the transfer leaving the business owner in a despondent state. Fischer and Cotton, both of whom were present when the neighborhood rallied against the establishment, said neighborhood residents need to take a stand against troublesome businesses.

Cotton said she distributed 700 flyers to gather residents to oppose the liquor store. She sees that as a model to prevent future liquor businesses from moving into the ward.

When asked about the proposed 210-bed transitional housing opening up on Auburn Street, Sosa, Cotton, and Fischer said they did not have details about the plan.

“We have not received that information,” said Fischer.

In a ward where violence has claimed the lives of young people, Cotton, Sosa, and Fischer said schools need to do more to provide recreational opportunities to children.

“We need to open up our schools,” said Cotton. She said the churches and community groups need to step up for young people.

Fischer said the schools have to provide after school programs to students.

Sosa also agreed schools should be opened up. A landscaper, Sosa said he handles the landscaping around School 21, which he adopted in the 4th Ward. He said he often plants flowers at the location to make the school a welcoming place for children.

Mayor’s policies in the 4th Ward

Sosa said the city has been providing minimal services to the 4th Ward when asked what he thought of mayor Jose “Joey” Torres’ policies to revitalize the most challenging of all six wards. He complained about dirty streets and crime.

“We’re not the bastard child in the 4th Ward,” retorted Cotton during her closing remarks. She said she thought the mayor’s plans were helping the ward, but expressed disappointment at the way the mayor fumbled the federal promise neighborhood application for the 4th Ward.

Cotton noted the veterans housing, the re-entry program, and the abandoned properties initiative. She said she has witnessed some properties that were bundled and auctioned off being rehabilitated.

Cotton said she’s now hoping for a state promise zone designation. She said the abandoned houses are also being rehabbed.

“I was very upset at the beginning at the reentry program. I felt it was dumped on us,” said Fischer about the Center of Hope on Montgomery Street.

Fischer said the mayor has to do a better job to communicate with residents rather imposing things on the community.

The re-entry program is much needed in the ward recognized Fischer.

“Mr. Sosa you did not answer the question,” said Cotton after Sosa read off remarks rather than answering the question about the mayor’s policies and their impact on the 4th Ward.

“The process has really taken a long time. I don’t know if we took one abandoned property back,” said Cotton.

Fischer, Cotton, and Sosa agreed the city can wean itself out of transitional aid.

“It’s really difficult to cut 10% of the budget,” said Cotton.

“We have to stop getting help,” said Sosa.

“It’s going to take creativity,” said Fischer. “Having this aid is why we always get tax increases.”