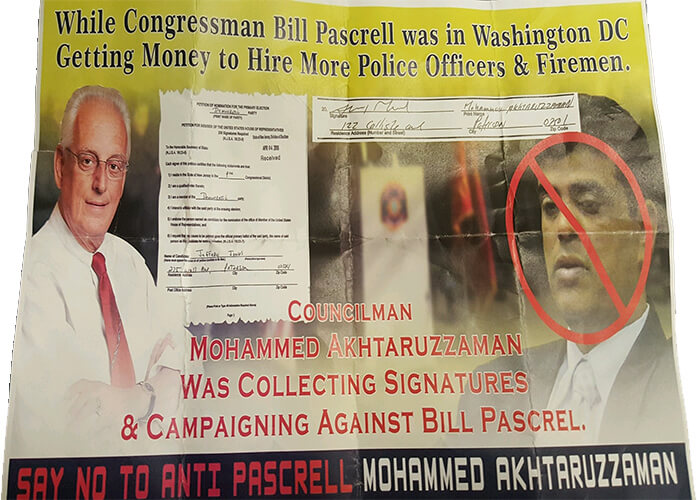 Incumbent Mohammed Akhtaruzzaman said a negative political flyer circulating in the 2nd Ward alleging he campaigned against Rep. Bill Pascrell by ostensibly collecting signatures for former mayor Jeffery Jones is based on “forgery” and “false information.”

Akhtaruzzaman blamed his opponent Shahin Khalique. The incumbent’s campaign said “operatives from the Khalique campaign” were distributing the flyer during the past weekend.

“While Congressman Bill Pascrell was in Washington DC getting money to hire more police officers & firemen,” reads the negative advertisement without a “paid for by” label, “Councilman Mohammed Akhtaruzzaman was collecting signatures & campaigning against Bill Pascrell.”

The flyer bears a Jones petition allegedly signed by Akhtaruzzaman. “I did not sign it. Someone forged my signature,” said Akhtaruzzaman.

“Say no to anti Pascrell Mohammed Akhtaruzzaman,” reads footer of the flyer. Akhtaruzzaman said he signed an affidavit stating he did not sign Jones’ petition when the Passaic County Democratic Party challenged Jones’ move to trigger a primary with the popular hometown congressman.

“I did not sign this petition at any point, nor did I endorse Mr. Jones for the position he seeks,” reads the affidavit Akhtaruzzaman submitted which helped disqualify Jones from a congressional run.

Jones’ campaign submitted 239 petitions of which 79 were challenged by the party. 40 of the former mayor’s petitions were found invalid.

“When it was circulating somebody forged his signature,” said Emanuel Capers, Jones’ campaign manager. “We apologized to Akhtaruzzaman for that.”

Capers said someone designed or set up Akhtaruzzaman.

Akhtaruzzaman said he wholeheartedly supports Pascrell. He said he intends to file a lawsuit against Khalique for damaging his character in flyers that go back at least a year.

“They started this a year ago. You could see it’s them,” said Akhtaruzzaman.

“I have lawyers on retainers. I am not worried at all. Bring it on,” responded Khalique.

Akhtaruzzaman said the Khalique campaign is allegedly using the printer owned by his campaign manager to make and distribute the “false” flyers.

“We reject his accusation,” said Khalique in a text message response. He also said he heard rumors Akhtaruzzaman signed the petition in front of Capers.

Capers said Akhtaruzzaman did not sign the petition in his or Jones’ presence.

The flyer does not have a “paid for by” line identifying the source.

In July 2015, Akhtaruzzaman showed a flyer, which he said was from the Khalique campaign, with his face distorted.

Akhtaruzzaman is in an intense four-way race with Aslon Goow, Eddie Gonzalez, and Khalique.