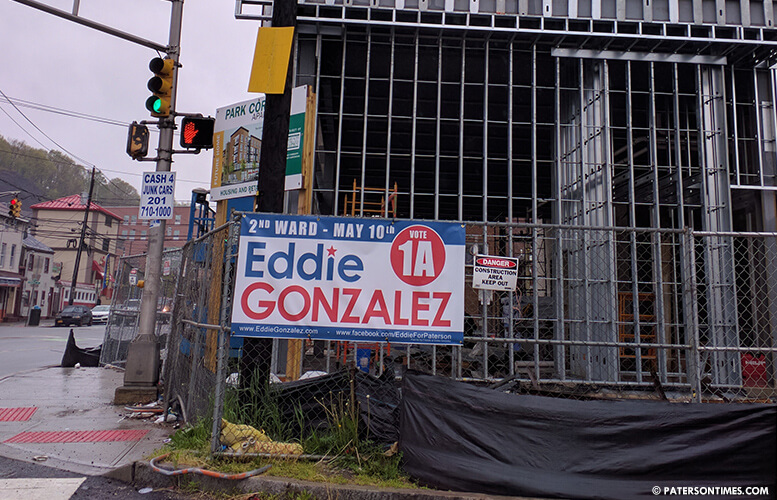 The New Jersey Community Development Corporation (NJCDC) is under criticism for having 2nd Ward city council candidate Eddie Gonzalez’s political signs on the fence of an under-construction building in the corner of Spruce and Grand Streets.

“His signs are where they are not supposed to be. Nobody else’s signs are there,” said Aslon Goow of Gonzalez’s signs on the nonprofit’s buildings.

Gonzalez’s signs are posted outside of a building on Front Street, which the NJCDC is looking to acquire, but has not yet done so. His signs are also posted on a fence of a NJCDC owned building in the corner of Spruce and Grand Streets.

“I have people who put up my signs for me and they put them up where we can get the highest exposure,” said Gonzalez. “They are in key locations where everybody else put their signs.”

Gonzalez said the signs are not on the building themselves, but on the fence or on the ground.

A violation of the law can lead to a nonprofit losing its tax-exempt status. However, organizations are allowed to hold candidates forum and undertake nonpartisan activities.

“We’re not in any way shape or form endorsing Eddie or any other candidate,” said NJCDC president Bob Guarasci. He said in the past years the corner has been littered with political signs. He said 2nd Ward and 5th Ward candidates have made use of the high trafficked area.

“We don’t take sides. In past year, that corner has been absolutely full,” said Guarasci. This year though, there’s only four Gonzalez signs on the fence. Gonzalez is employed as director of outreach by NJCDC.

Guarasci said any candidate may make use of the corner by placing their signs on the fence.

Incumbent Mohammed Akhtaruzzaman said he wasn’t sure if he could place a sign on the fence. When told Guarasci said anyone candidate may utilize the fence for displaying their signs without permission, Akhtaruzzaman responded, “I’ll put a sign there.”

Akhtaruzzaman said he is sending a campaign worker to place one of his campaign signs on the prominent corner. Vehicular traffic from both Route 80 and Route 19 flow through the intersection making it a good spot for election signs.

“If it’s open to everybody it’s fine,” said Akhtaruzzaman.

Akhtaruzzaman, Goow, Gonzalez, and Shahin Khalique are vying for the 2nd Ward council seat in next Tuesday’s municipal elections.