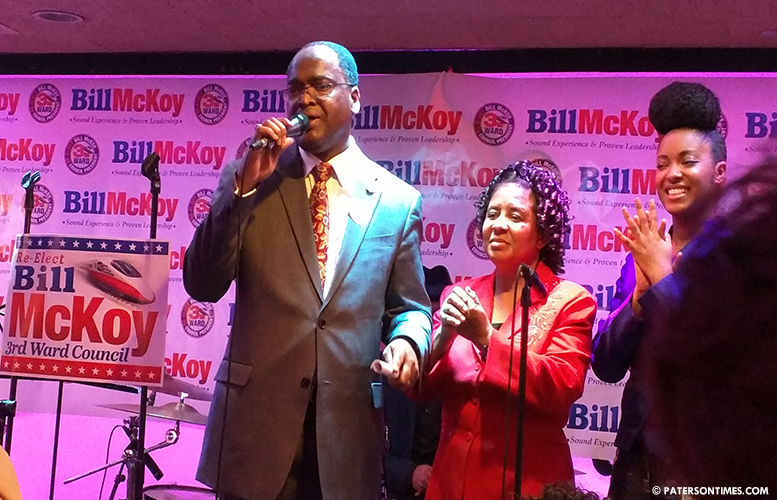 Councilman William McKoy spent more money in the recent 3rd Ward election than all three of his opponents put together.

McKoy raised $56,000 and likely spent the same amount leading up to the May 10th, 2016 election. His opponents Flavio Rivera, who finished second place, raised about $9,000, according to his 11-day pre-election report.

The final cost incurred by each of the candidate is not yet available; the post-election campaign finance reports are due at the end of this month. New Jersey election laws require candidates to report large contributions, $1,400 or more from a single source, within 48 hours starting from the 13th day before the election.

Rivera estimates he spent about $12,000. Another opponent Kenneth Simmons raised $8,203, according to filings.

Simmons likely spent the same amount in the election. The second biggest spender to McKoy was challenger Lilisa Mimms.

Mimms raised $21,456, according to her 11-day pre-election report. She likely spent the same amount in the election.

“As an incumbent you have to do more to get your message out and combat the Donald Trump effect,” said McKoy, who serves as the president of the city council, on Tuesday night. He said the 3rd Ward election became a proxy battle between several groups bent on unseating him.

McKoy said he had to spend a great amount of money to counteract the messages put out by his three opponents.

“That was expected. He has the facility to raise money. He needed it. It was a tough race,” said Rivera on Friday morning when asked for his input on McKoy’s spending.

McKoy said the expenditure is in line with his spending on previous campaigns. For example, the councilman spent $41,458 in 2012 when he narrowly beat then-candidate Alex Mendez in the 3rd Ward election.

Mendez’s political rise was punctuated for two years until he won an at-large seat in 2014. In 2008, McKoy spent $28,415 to preserve his council seat, according to reports the councilman filed with the state.

In 2004, McKoy spent $40,155 to keep his seat, according to campaign reports. In 2000, the councilman ran as part of former mayor Martin G. Barnes’ slate. He was the only candidate on disgraced mayor Barnes’ slate to win office that year.

McKoy is the longest serving councilman on the city council. He will begin his fifth term on the council on July 1st, 2016.

“You had three people running against you so they could split the vote and one of them could win,” said Donald Lynch, a community activist, who congratulated McKoy the day after the election, at a public meeting. “You beat the odds.”