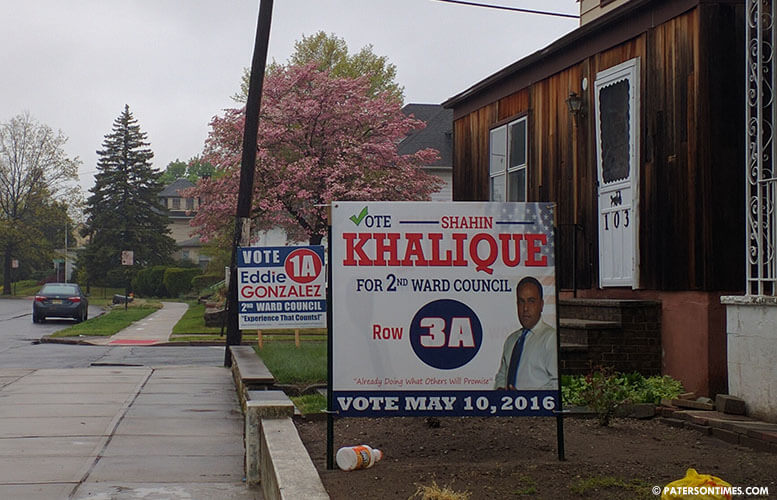 Almost a month after the municipal elections 13 out of the 19 candidates have yet to file their final post-election campaign finance reports, according to public data from the New Jersey Election Law Enforcement Commission (ELEC).

Antoinette Brevard filed a sworn statement stating her campaign will not spend more than $4,500 in the 1st Ward election. She spent $2,535 from her own pocket, according to her reports. With a sworn statement a candidate is not required to file the usual campaign finance reports.

“It will be filed,” said Jackson on Wednesday morning. He said his treasurer has been extremely busy with other obligations delaying the filing. He reckoned his campaign spent $4,500 to $5,500.

Veronica Ovalles has not filed any of the three required reports. “Whatever I spent, I’m sure it’s under $4,500,” she said.

Ovalles said she filed a sworn statement stating she won’t go over $4,500. Her statement was not available the state’s public campaign finance reports system.

Incumbent Mohammed Akhtaruzzaman’s 20-day post-election campaign report has yet to be received by the state. His 11-day pre-election report shows he spent $11,312 in the heavily contested 2nd Ward election.

“We’re filing it within a week,” said Akhtaruzzaman.

Goow, who filed a sworn statement initially stating his campaign will not exceed the $4,500 threshold, said the campaign will file within the next week or so.

Eddie Gonzalez is the only candidate to file a 20-day post-election report in the 2nd Ward. His report shows he expended $32,913 in the election.

Khalique did not file any of the three campaign finance reports. He could not immediately be reached for comments on Wednesday morning.

None of the four candidates have filed their 20-day post-election reports in the 3rd Ward.

Incumbent William McKoy’s 11-day report shows he raised $55,000 and spent $47,380. The incumbent spent more than all three of his opponents combined.

Mimms, Rivera, and Simmons, and McKoy could not immediately be reached for comments.

Cotton and her husband Ed Cotton loaned $16,500 to the councilwoman’s campaign. Her opponents Della Fischer did not file a post-election report.

Fischer raised $2,800, according to her 11-day pre-election report. Juan Kivelier Sosa filed a sworn statement that his campaign did not plan to exceed $4,500.

Fischer could not immediately be reached for comments.

Luis Velez’s 11-day report shows he raised $13,415 and spent $11,834. Although Cleaves and Velez have filed pre-election reports, Wendy Guzman has yet to file any of the three required reports.

“It was mailed on Saturday,” said Cleaves about her post-election report.

“Mines is on the way to be submitted,” said Velez. He said the holidays delayed his submission. He estimates his campaign spent $16-17,000 in the race.

Guzman could not immediately be reached for comments.

Abdelaziz received $12,200 from mayor Jose “Joey” Torres and his wife Sonia Torres weeks before the election.

Sayegh ended up defeating Abdelaziz despite the financial disadvantage.

The campaign finance reporting system is in place to ensure voters are able to ascertain information about contributions and expenditures for a particular candidate running for office.

Those who do not comply with the reporting requirements may be subjected to penalties. The state recently took action against former at-large council candidate Haytham Younes accusing him of breaking campaign finance laws.