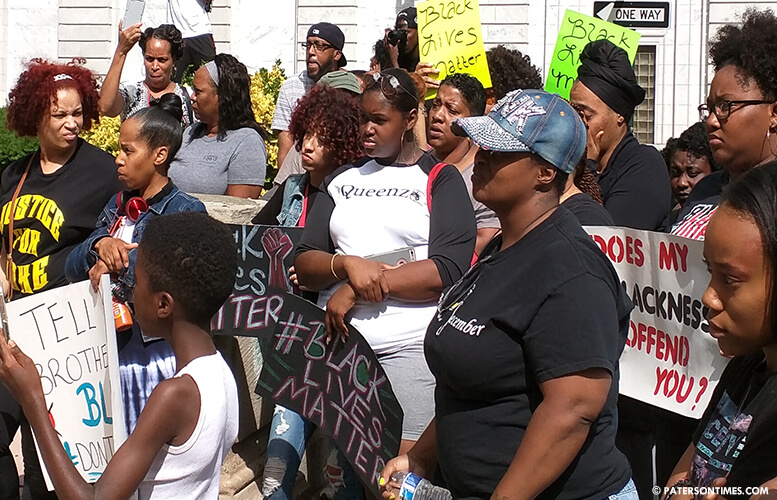 More than a hundred protesters holding up signs – “Tell Your Brother in Blue Don’t Shoot” and “Am I Next?” – repeatedly chanted “Black Lives Matter!” in a demonstration in front of City Hall on Sunday afternoon.

“Innocent people are being killed. Mostly black men and teenagers,” said city resident Naim Benjamin, 33, who held up the sign, “Am I Next?” When asked about his sign, he said any African-American man – including himself — runs the risk of being shot and killed by police for his skin color.

Black Lives Matter protesters with signs in front of City Hall in Paterson.

“We’re just tired of being harassed and killed,” said Benjamin.

The protest in Paterson is part of a nationwide series of demonstrations by the Black Lives Matter movement sparked by videos showing police encounters that led to the death of Alton Sterling and Philando Castile in Louisiana and Minnesota.

“The next black man to be killed could be me. It could be you, could be your uncle, your father, your son,” said another protester Zellie Thomas. He said it’s not just shootings, but also the constant harassment of African-Americans motorists by police.

“Every time you’re driving your heart starts to race,” said Thomas citing the predatory police checkpoints on the borders of Paterson setup by surrounding municipalities. “It doesn’t matter if your insurance is good or not, whether you have your license or not, you’re afraid you will be pulled over and be accused of something you did not do. That’s no way to live in this country.”

“Even with a black president they are killing us like animals on a farm,” added activist Corey Teague, a former school board member.

The protest did not just include city activists and residents. Surprising number of young people descended on City Hall from all over New Jersey.

22-year-old Sara Ali, who held up a sign that read “Our Taxes Pay for Corrupt Killer Cops,” came from Ewing to be part of the demonstration. “The ones who are not killers should take the initiative and stand with the victims,” said Ali. “By being silent you’re saying, ‘I’m okay with the ability to murder any person with impunity.’”

“We can’t just watch,” said Sunem Sanchez, 18, of Butler. She and two of her friends came to Paterson by taking three buses from Morris County.

“This is something that needs to be addressed,” said Amadore, who lives in the city. His mother dropped him off in Butler and so he joined the other two to bus themselves to the protest.

“I don’t want to wait until someone I know is murdered,” said Sanchez.

“We don’t deserve this. We deserve to live just like anyone does. We deserve to go home to our families each and every night,” said Nicheema Williams, 16, a student at Eastside High School. “We’re tired of seeing our youth, our men, and our women being killed by cops that do not care. They don’t care about us. You have no right to kill anyone of my people.”

The protest which began at 3 p.m. gathered steam as time passed and more and more congregated in front of the government building. Police officers were first to appear on the scene.

Police director Jerry Speziale, who has been able to build the legitimacy of the police department in the city’s African-American neighborhoods, said before the protest, that police have a good relationship with the community in the Silk City.

Almost a dozen police officers were present leading activist Casey Melvin to call for a representative of the police department to address the crowd.

Melvin did not find any takers.

“Not all police are bad,” said Chanel Fields, 40, of Scranton, Penn.

“When you find a good cop, it’s not an anomaly, it’s normal. A good cop goes to work every day and do their job. The bad ones stick out like sore thumbs and they get in trouble for it,” said police sergeant Dalton Price of the Community Policing Unit. “We’re not an anomaly.”

“When someone shoots at a cop you can’t blame the whole community,” said Price, who is African-American, bringing to mind the Dallas incident in which an U.S. Army reservist, Micah Johnson, shot 12 police officers killing 5 of them. “It’s not the whole community, it’s that person. It’s the same thing with police.”

Though the protesters held up signs critical of police – “Jim Crow Wears Blue” and “Black Lives Should Matter to All Cops” – Price described the crowd as “peaceful.”