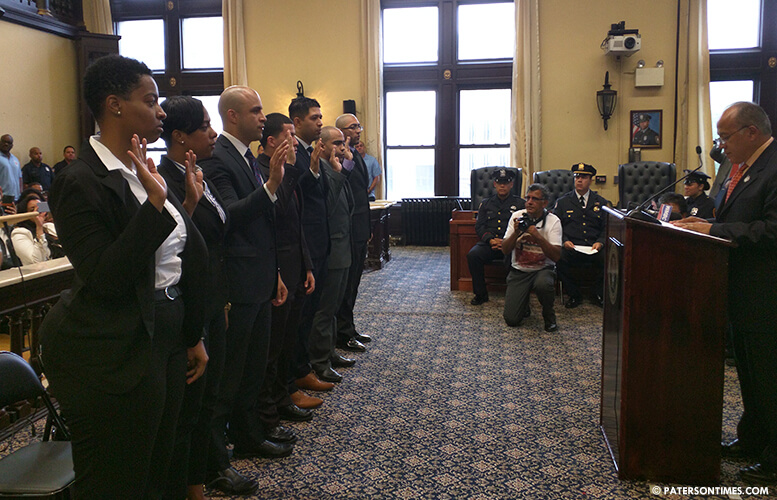 Seven new police officers and chief William Fraher were formally sworn in during a City Hall ceremony on Thursday morning.

The seven recruits and the chief were sworn in by mayor Jose “Joey” Torres in presence of families of the new officers, police brass, and other city officials.

“Swearing in new police officers is like watching lightening during a thunderstorm, its very presence and incredible burst of energy infuses the spirit of the department with renewed strength and vitality,” said police director Jerry Speziale. “You’re joining the best police department in New Jersey.”

The director also commended Fraher’s work in the police department. He described the chief as among the “elite” officers in the nation.

Fraher was hired as a police officer in the city on January 1st, 1975 under the reign of mayor Lawrence “Pat” Kramer.

“At a time when our nation is wrestling with many issues Paterson police department has always come through that happened because of the quality of individual in that department and their leadership,” said Kramer, who attended the ceremony.

The ceremony included a moment of silence for the five uniform officers killed in Dallas, Texas.

“It’s challenging out there, very challenging. It’s your job to make the community feel safe,” Ruby Cotton, 4th Ward councilwoman, told the recruits. “We need people to look after us. To make sure we are safe. Get to know the community you serve, each community is different.”

There has been national demonstrations against police conduct, particularly involving African-Americans, in the United States. There have been two such protests in Paterson this week alone.

Cotton urged the new members to work with neighborhood residents to build a safer city.

The formal swearing in of the chief is a bittersweet moment for Fraher who will be retiring in six months.

“I represent the department’s past. I do not represent its future.” said the chief to the recruits. “I have six short months to stay in office. It will be up to you to represent what the city’s future will be.”

Fraher told the recruits to never take short cuts and to treat citizens with fairness and justice. “You need to do that because our very legitimacy as an organization depends upon it. We are honest brokers. We’re not avenging angels. Vengeance is in the hand of God. We’re the instrument of justice,” he said.

The recruits reflected the diverse Silk City community, said officials. The mayor, who is in his third-term, took pride in having a police department reflective of the community it serves.

Our police “truly represents the diversity of our community,” said Torres.