After he was unanimously voted by his colleagues to remain as the city council president earlier in the month, councilman William McKoy preserved most of his previous committee appointments with slight changes.

McKoy’s key changes include the appointed of Michael Jackson, 1st Ward councilman, to serve as the chairman of the public safety committee, which oversees the police and fire departments. 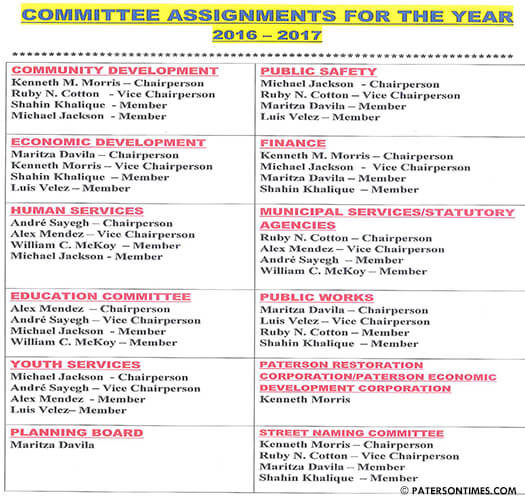 Morris also retained his post as the chairman of the finance and the community development committees.

McKoy appointed Alex Mendez, councilman at-large, to serve as the chairman of the education committee. This post was previously held by former councilman Julio Tavarez.

Maritza Davila, councilwoman at-large, remained the chairwoman of the economic development, public works, and planning board committees. Andre Sayegh, 6th Ward councilman, continues to hold on to the health and human services committee.

Newcomer Luis Velez is serving as the vice-chairman of the public works committee. The other newcomer Shahin Khalique received seats in various committees without being appointed chair or vice chair.

A committee is usually — planning board and PRC committees are exceptions — made up of four council members. The committees review measures before the proposals are presented to the entire council. Chairperson of a committee can sometimes block measures from making it to the whole council.

The council president typically assigns top ranking spots on committees to his allies or colleagues who voted for him during the reorganization meeting.