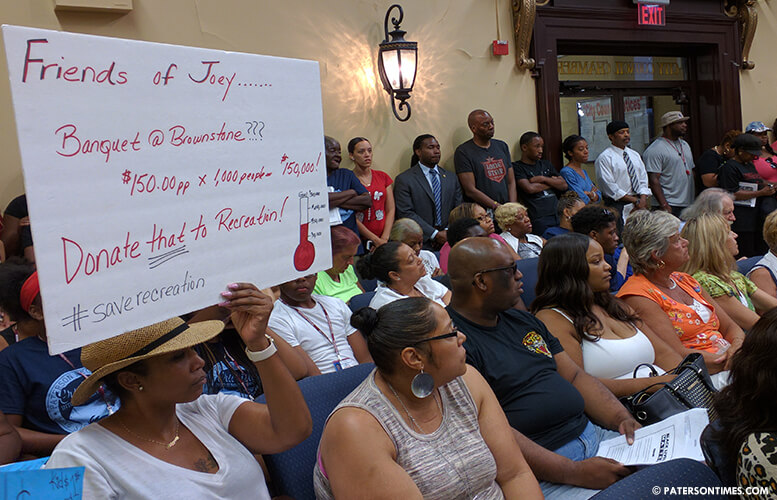 City residents packed the city council chambers on Tuesday evening to protest mayor Jose “Joey” Torres’ move to close more than 30 summer programs, two municipal pools, and other recreation programs by the second week of August in a tax levy battle with the city council.

“We might see a direct correlation between what’s happening on the streets and this cut,” said Talena Queen, a parent, whose child is enrolled into one of the city’s programs, suggesting the large number of young people on the streets will increase the possibility of them becoming victims of violence.

“Please don’t send my child out there to be killed,” said city resident Brenda Thomas, who was one of more than 100 protesters, at the council meeting.

Programs like the summer camps provide a safe haven for young people from some of the most troubled neighborhoods in the city. For many going to one of the two municipal pools, scheduled to close on August 12th, 2016, is like hitting the waters at the Jersey Shore, said community leaders.

“If we don’t invest in our children, we won’t have a future,” said Queen. As many as 400 young people, who rely on their summer job at recreation to purchase school clothing and supplies, will be let go.

“How do you pick 30 kids and say: ‘You 30 kids are going home’?”  said assemblyman Benjie Wimberly, who serves as the recreation coordinator for the city. He said the pools opened late this year resulting in a $200,000 savings.

The city budgeted $2.1 million – less than one-percent of its budget — for recreation in fiscal year 2016, according to budget documents. The Torres administration has yet to state the amount of money the city will save by closing the 36 recreation programs, 2 pools, a boxing program, and an adult fitness program.

Wimberly reckoned the early closure will generate $150,000 or so in savings.

Wimberly said the city has already incurred expenses to keep the pools open, but there won’t be staff to keep the sites open after Aug. 12. “If we continue to turn our kids away, our community will turn into a disaster,” said Wimberly, who skipped the Democratic National Convention in Philadelphia to attend the council meeting.

He pointed to a past incident in which a young man cracked open a fire hydrant only to suffer a water pressure blast which forced him into the road in front of a vehicle. The young man died as a result, he said.

Majority of the speakers blamed the mayor for the shutdown. Some called for a no confidence vote on the mayor while others called on him to resign.

“This is a political game from the administration,” said Alex Mendez, councilman at-large. “We got to call it like it is.”

The council approved a temporary budget earlier in the month which appropriates funds for recreation programs. However, without an approved tax levy, the city cannot raise revenue from homeowners creating a cash flow problem for the municipality which may require the administration to borrow funds at interest to run the government.

Council members twice rejected the mayor’s tax levy proposal each time urging the administration to present a “reasonable” levy that does not overburden “tapped out” homeowners.

The Torres administration both times presented the same levy.

“The administration should look elsewhere to cut the budget,” said Shahin Khalique, 2nd Ward councilman. Andre Sayegh, 6th Ward councilman, suggested the mayor axe some of the political patronage positions he created over the past two years.

“I want to see what else is being cut before our kids,” said Maritza Davila, councilwoman at-large. She said the public works department – recreation falls within this department – has 34 budgeted, but vacant position.

She suggested money from those vacant posts can be used for recreation.

The protest also attracted school board members. School board president Christopher Irving suggested a meeting between the council’s finance and school board’s fiscal committees to find ways to enter into more shared services agreements to create savings that can then be allocated towards recreation.

“Everybody in here has a heart and your heart has to be broken by these things we’re discussing,” said Wimberly.