Khalique told voter living in another town and voting in Paterson is ‘not a problem,’ court filing | Paterson Times 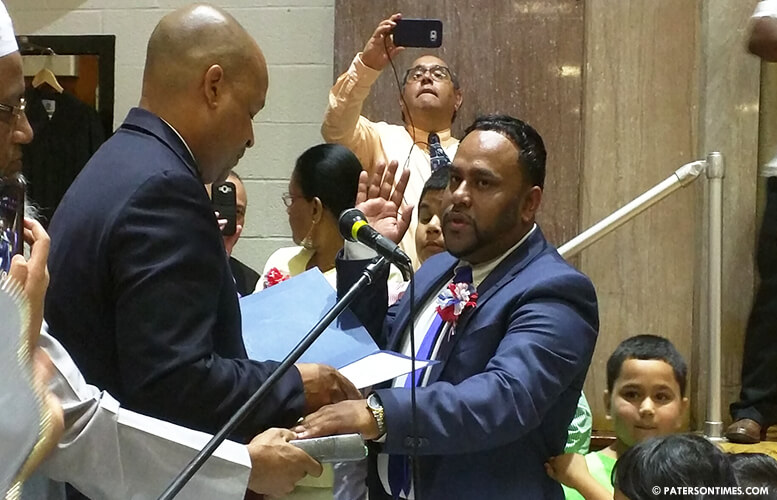 Councilman Shahin Khalique is heard telling a voter it’s “not a problem” to live in Clifton and vote in Paterson in a new piece of audio evidence submitted to the New Jersey Superior Court by former councilman Mohammed Akhtaruzzaman who is seeking to nullify Khalique’s election victory alleging widespread voter fraud.

“People live in one place 10 to 15 years and vote in another place. It’s not a problem. It’s no matter,” Khalique is heard saying in the four-minute long phone conversation. He re-assures his interlocutor Mohammed N. Islam, who admitted he voted in the 2nd Ward while residing in Clifton, that he will protect him from any possible prosecution.

“For him it’s not a problem, for me it’s voter fraud,” said Passaic County superintendent of elections Sherine El-Abd. She expressed shock and disbelief reading the transcript of the recording which has been submitted to the court and shared between attorneys in the case scheduled for trial in September.

Khalique did not respond to multiple calls for comment on Wednesday morning.

“There’s a lot of people who live in one place, and have insurance in another place to get cheaper rate. That’s not a problem for the car insurance, you can use a mailing address anywhere and you can register to vote anywhere else and vote,” he is heard telling Islam as he justifies election fraud.

It’s not clear whether Khalique believes the examples he cities to Islam. His conversation with Islam occurs in Bengali, but has been transcribed by a New York-based translator and interpreter known for serving as an interpreter in many municipal courts.

Islam initiated the conversation with Khalique from the office of private investigator Steve Olimpio, a former Paterson detective, who has been hired by Akhtaruzzaman, to prove he was telling the truth.

Islam told Olimpio he came forward about voting in the 2nd Ward election at the urging of his family and fearful of possible prosecution as El-Abd has been investigating allegations of voter fraud in the May 10th, 2016 election.

The Passaic County Prosecutor’s Office has been provided both the audio and the English transcription, according to Akhtaruzzaman.

“Any alleged violations of the election laws are subject to review by the Passaic County Prosecutor’s Office as such this office cannot comment on whether any criminal investigation exists and what materials are reviewed as part of a criminal investigation,” said chief assistant prosecutor Mary Ryan on Wednesday afternoon.

The former councilman said the recorded phone conversation evinces the way Khalique has been preventing people from coming forward. “I’ve been complaining about this from day one. He has no respect for the law. This evidence shows what he has been telling these people individually,” said Akhtaruzzaman.

Akhtaruzzaman lost to Khalique by 20 votes in the May election for the 2nd Ward seat. Khalique won by securing 1,010 mail-in votes. Those mail-in votes caused all three of Khalique’s opponents to allege he was using questionable methods to obtain mail-in ballots.

“You’re a councilman, a legislator, and you’re telling people to break the law,” said Akhtaruzzaman.

A transcript and audio of the recording can be found below: