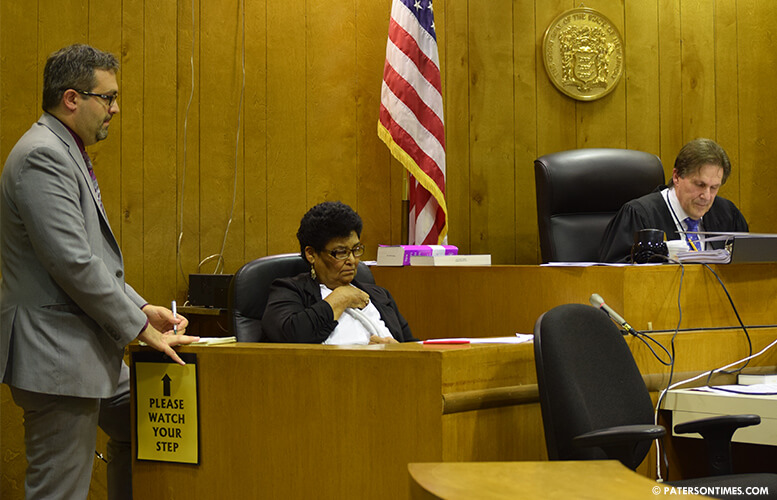 Attorneys for former councilman Mohammed Akhtaruzzaman continued to call on witnesses to the stand.

Voter Sharmin Razzak testified stating she voted using a mail-in ballot. She said she did not receive any assistance despite her ballot listing Foyes Ali as an assistor. She said she knows Ali, but that another individual picked up her ballot for mailing.

Razzak said she did not get the ballot in mail. She indicated she did not see the paper that had the list of candidates.

“I just voted for Shahin that’s what I know,” she told the court. Similarly, a second witness, Abusaleh Noorullah, said he was not assisted by an individual (Zakaria Ahmed) who is on record as having been the assistor.

“I did it myself and mailed it,” said Noorullah. He said Ahmed, who he knows, did not assist.

A third witness, Taifa Ahmed, said she received the ballot in the mail, marked it, signed it, and inserted it into an envelope. She told the court Foyes Ali, who is listed as an assistor on the mail-in ballot, did not assist her.

“I did everything myself,” she said.

Why is his name listed as an assistor? asked Susan Champion, attorney for Akhtaruzzaman.

The morning portion of the proceeding finished the assistor issue in which voters had been assisted by assistors they never met. Champion moved to bring up the residency issue by calling up witnesses.

The residency issue became a little complicated as some of the witnesses on the list were also those that Akhtaruzzaman’s campaign challenged in the May 10th, 2016 election. 19 mail-in votes were challenged. Of that two of them were ruled on by a judge because the board of elections tied on the two voters.

Judge Ernest Caposela said he could not rule on something in which another judge had made a determination.

Caposela reviewed an audio recording where the judge determined the two voters would be allowed to cast ballots. There were no written orders associated with the judge’s ruling which forced Caposela to locate the audio recording and review it before the lawyers.

Once the judge had determined the two voters on whose residency a previous judge ruled, the proceeding continued.

Champion called on Ramona Hernandez-Tineo, who is the mother of Katty Morfa. Morfa worked on Shahin Khalique’s campaign dealing with mail-in votes.

Hernandez-Tineo (pictured in center) said she voted using a mail-in ballot, but could not recognize a sample ballot when shown by Champion. She said no one assisted her. Champion moved to question her residency.

Hernandez-Tineo, who does not speak English, submitted documents that provided proof of her residency. Those written documents though were in English. Hernandez-Tineo at first said she prepared the documents and then said someone helped her.

Another witness Steven Lantigua used an address on Chestnut Street to fill out his taxes, but voted in the 2nd Ward using an Edmund Avenue address. He lived in the basement of 375 Edmund Avenue he told the court.

Lantigua also used the Chestnut Street address on social security. When asked whether he changed his address with social security, Lantigua responded: “No, I forgot to.” He had a number of letters and documents that were dated June and July 2016.

Ahmed said he gave his mail-in ballot to Ali for mailing without sealing it to Champion, but then changed his story when questioned by Carbone.

“So you didn’t leave an unsealed ballot?” asked Carbone.
“No,” responded Ahmed.

The last witness of the day Akhtar Hussain said Ali is his nephew. He said Ali helped him to make sure he completed the mail-in ballot properly.

Champion asked Hussain whether a sample ballot looked similar to the one he completed to vote. Hussain said the paper in front of him did not look like the ballot.

The hearing continues tomorrow morning. Though both sides indicated there would be hundreds of witnesses testifying in the case that may not be the case.

Caposela asked Champion how many more witnesses she will call to the stand. She said approximately 35.

Carbone said he may call 50-60 depending on how the case proceeds this week.