Couple say signed ballots were cast, but they did not vote in Paterson’s 2nd Ward election at trial | Paterson Times 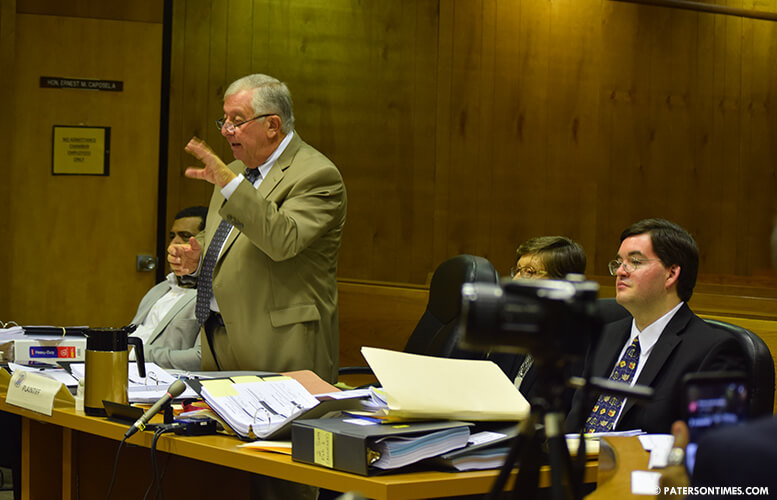 A couple recorded as having voted in the 2nd Ward election using mail-in ballots told the court on Wednesday morning they did not vote.

Roberson Mervilus said he did not vote in the May 10th election as the 2nd Ward’s election fraud continued for a third day. In his testimony, he said his landlord, identified as Solomon Pervis, encouraged him to vote. He said he signed papers that were presented to him by the landlord.

He recognized his signature on the ballot when Susan Champion, former councilman Mohammed Akhtaruzzaman’s attorney, showed it to him. He said the printed name on the ballot did not look like his handwriting.

Mervilus said he never saw the ballot. “Did anyone tell you by signing you were voting for somebody?” asked deputy attorney general Alan Stephens, who is representing the state and Passaic County elections superintendent and board of elections.

“No,” responded Mervilus. He also did not know the person listed as an assistor on his ballot. His wife, Alexandra Mervilus Pierre, had a similar story.

Pierre said she never cast a ballot in the election. “Some people wanted me to vote,” she said.

“But you didn’t vote?” asked Stephens.

“No,” she responded. Her assistor Titu Miah was not someone she recognized, she said. Miah was expected to testify at the court on Wednesday afternoon, but judge Ernest Caposela granted him an opportunity to consult with an attorney before doing so.

John Carbone, who represents councilman Shahin Khalique in the case, suggested Miah could end up in jail by incriminating himself. He suggested the Passaic County Prosecutor’s Office was conducting an investigation and would bring charges.

The Passaic County Prosecutor’s Office has an interest in the case, said the deputy attorney general. Miah is a key witness in the case. He revealed in testimony to a private investigator that there was an alleged backroom operation at Khalique’s campaign headquarter specifically to handle hundreds of mail-in ballots.

Khalique’s campaign workers allegedly filled out certificate of mail-in voter at the campaign office, according to Miah’s statement. Akhtaruzzaman’s campaign identified 25 men who were involved in the operation. More than 221 mail-in ballots were handled by those men, alleged the former councilman in court filings.

Khalique boasted about having 1,000 mail-in votes prior to election day in a flyer that featured councilwoman Maritza Davila.

The judge held a conference with attorneys from both sides in reference to Miah. The Passaic County prosecutor’s office was invited, but did not attend. Champion said Carbone is simply attempting to intimidate and there’s no indication an investigation was taking place.

The prosecutor’s office has previously said it would neither confirm nor deny the existence of an investigation.

The third day saw 10 witnesses in all who gave similar testimonies to those that occurred on the first and second day.

Joaquin Marrero said he signed and voted. He said he did not know the person, Miah, who was listed as an assistor on his ballot. He said an unidentified person visited him to pick up the mail-in ballot.

“Did you ever see a list of names?” asked Stephens pointing to a sample ballot.

Antulio Medina, another voter, said he signed, but did not recognize the printed writing on the ballot as his own. “I don’t write like that,” he told Champion as she questioned him.

Medina said he was on a walk outside of Don Bosco Elementary School when someone approached him with papers to sign. He said he never saw that person again in the area.

Nasrin Ahmed said she doesn’t remember the ballot, but said she signed the document after it was filled out by an assistor. She said Mashuk Ahmed, her husband’s friend, filled out the ballot, and she just signed it.

Though she did not recall the ballot with the candidates on it, she said she marked Khalique.

Nelson Vives-Lozada said he did not vote. He said he never received a ballot. He said a short individual, dark skinned, with heavy Indian accent, visited him to register him to vote out of his Maple Street address.

“I thought I was just registering to vote at that address,” he said. He moved from Market Street to Maple Street, he said.

Lozada signed paperwork at that point. He indicated he did not recognize the assistor on the ballot and the printed writing was not his.

Mohammed Abdul Latif said he was assisted by Khalique’s brother Jewl Khalique. He said the brother filled out the ballot, but that he selected a candidate and signed it.

When questioned whether she placed the completed ballot in the envelope Jessy appeared confused. “Was it supposed to be in the envelope?” she asked attorneys from both sides.

Akhtaruzzaman’s attorney also called on witnesses to testify on some of the questioned voters’ residency.

Matiur Rahman testified that a woman, Nasima Chowdhury, voted using an address on Dixon Avenue. He said she once lived at 129 Dixon Avenue, but no longer does. He said he lives at 145 Dixon Street.

“She used to live there long ago,” said Rahman. “She doesn’t live here anymore.” He said she had told him her husband was moving to New York City.

Similarly, Kazi Uddin, who lives on Walnut Street, testified his neighbor Rajibur Ali, does not live next door to him.

Ali is listed as having cast a mail-in ballot from 136 Walnut Street. He said several men from the Bengali community visited him to inquire whether Ali resided at the address. He told them Ali did not live at the location and gave his testimony.

Uddin has owned both 136 and 138 Walnut Street since April of this year, he said. He said he saw insurance letters, doctor’s appointment letters, and car advertisements were being received at his address by names that did not belong to any of his tenants.

Carbone asked Uddin if he has been opening those letters. Uddin said no. Carbone asked how he knew one of the letter was for doctor’s appointment.

Uddin said the envelope said so. Both sides accused each other of speaking to the witnesses before their testimony.

Carbone complained Pedro Rodriguez, who was at the courthouse in the morning, was speaking to the witnesses. Champion confronted men who she said were speaking to witnesses in the hallway.

The judge ordered the witnesses be sequestered.

Both Khalique and Akhtaruzzaman were present during the hearing.

The trial continues for a fourth day at the Passaic County Courthouse tomorrow.