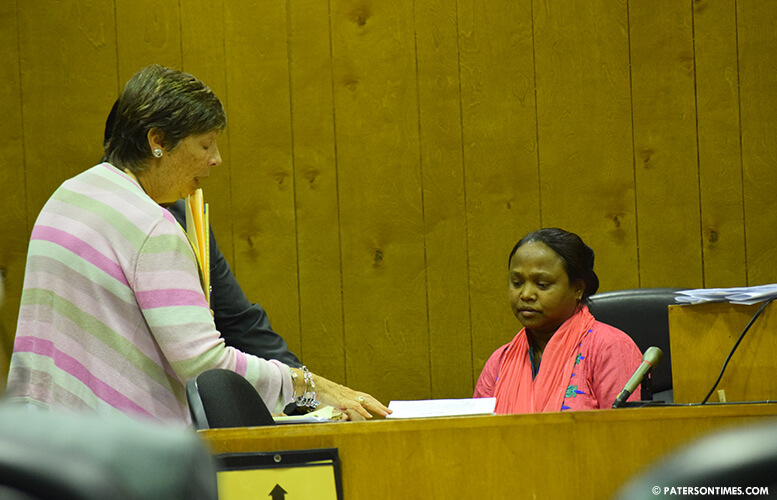 Of the 16 witnesses who testified by far the last witness, Parbin Ahmed, offered the most consequential testimony in the case so far. She told the court she followed the typical process to complete a mail-in ballot with some assistance from her cousin Rasel Ahmed.

She said she took the mail-in ballot she received to her cousin at which time he provided assistance. When she was asked by Susan Champion, former councilman Mohammed Akhtaruzzaman’s attorney, where she took the ballot and met with her cousin, she stumbled.

“You don’t recall where your cousin lives?” asked Champion. Ahmed (pictured) said he used to live on Union Avenue. It’s been a while since he moved, she told Champion. Her cousin is on record as having cast a mail-in ballot from 272 Union Avenue, according to Passaic County election records.

Parbin Ahmed then changed her testimony from taking the ballot to her cousin for assistance to her cousin assisting with the mail-in ballot at her home. She did not recall seeing the ballot when shown a sample ballot with the candidates’ names, but she was certain she marked her candidate of choice and voted.

Her cousin and other assistors will be called to testify next week. So far, a large number of witnesses have resisted subpoenas. Passaic County assignment judge Ernest Caposela yesterday said all witnesses subpoenaed will be testifying under the threat of contempt of court.

There were others whose testimonies went smoothly. Romana Hadi and her husband Shah Hadi corroborated each other’s testimony.

Romana Hadi said she signed her mail-in ballot and her husband sealed it. She said Giash Ahmed, who is listed on her ballot as an assistor, provided some assistance in helping her understand how to fill it out. When shown a ballot, she said she did not recognize it. When he testified, Shah Hadi said he recognized the sample ballot, and said he completed his own ballot.

Sabbir Ahmed recognized the sample ballot. He said he received assistance from his cousin Zakaria Ahmed. His mother also testified and her ballot lists Zakaria Ahmed as an assistor.

“He did everything and I signed it,” said Ruzina Begum, Sabbir Ahmed’s mother, speaking about Zakaria Ahmed. When asked if she marked a candidate, she shook her head in the negative.

“Did you vote for one of these four people?” asked John Carbone, attorney for councilman Shahin Khalique, reading the names of the candidates from the sample ballot.

Deputy attorney general Alan Stephens asked: “How did you actually vote?” She contradicted her testimony and said: “I marked it.”

Several witnesses also provided a contradictory description about a person who purportedly assisted them. Foyes Ali appears as an assistor in large number of mail-ins.

Mohammed L. Ali’s ballot states he received assistance from Foyes Ali. However, he said a co-worker helped him complete the mail-in. He said he knew Ali and described him as tall, fair, and possibly 50 years old.

Sumi Begum also received assistance from Foyes Ali. She described him as fat, in his early 20s, and short. She said Foyes Ali is her sister’s son. She recognized the sample ballot and stated she made a selection of the four candidates.

Binpani Bhattacharjee testified she just signed her ballot. She said her son assisted her in completing it, but Mashuk Ahmed is listed as the assistor on her ballot.

“Did he help you?” asked Champion referring to Mashuk Ahmed.

“It sounds like you and your son did most of the work,” said the deputy attorney general. “What exactly did Mashuk Ahmed do?”

The address that Binpani Bhattacharjee said was written by Mashuk Ahmed was actually written by her son, she said upon inspection of the document.

Carbone looked at the form and said the address and name appeared to be written by two different people. He said Binpani Bhattacharjee’s name was written in stylized form while the address was not.

Binpani Bhattacharjee’s son Debdulal Bhattacharjee did not recognize the sample ballot, but said he marked a candidate and voted by mail. His mail-in also lists Mashuk Ahmed as the assistor. He said Mashuk Ahmed helped him fill out the address portion.

Debdulal Bhattacharjee said he met Mashuk Ahmed when he booked a plane ticked through the latter’s travel agency. He said the latter inspected the mail-in ballot envelope to ensure everything was properly completed before mailing.

When asked if the ballot was inside the envelope, Debdulal Bhattacharjee said: “I’m pretty certain it wasn’t in the envelope.” He said he also mailed his mother’s mail-in ballot. He contradicted his mother’s testimony by stating the handwriting his mother had said belonged to her son was not his.

Lukman Hussain, one of the assistors, said he helped his mother-in-law with her mail-in.  He said he filled out the name and the address for her mail-in.

“He testifies at his own peril,” said the judge before Hussain took the stand.

Shamla Begum could not remember if she received a ballot via mail. She said the address and name on the mail-in was not her handwriting, but that of Taj Uddin. She said Uddin came to her house and completed it.

Uddin told her to vote for Shahin Khalique, said Shamla Begum. She marked a candidate, but didn’t remember the paper she marked the candidate on and did not remember whether she placed a stamp on the envelope before mailing her vote.

Carbone got Shamla Begum to say she voted at her own will.

Athirun Nessa, another voter, did not recognize the sample mail-in ballot. Her mail-in lists Zakaria Ahmed as an assistor. She is not literate and could not read. She did not know Zakaria Ahmed, but he assisted her to fill out paperwork, she said.

Nessa said she voted for Khalique at will.

Razia Khatun said she signed and voted for Khalique. She said she does not know her assistor, Foyes Ali.

“Because I voted, I faced the hardship of coming to court,” mumbled Khatun as she got off the witness stand. Witnesses have expressed frustration at having to miss work and spend days waiting to be called to testify.

The judge has provided letters to those who needed them for missing work or school.

Zahanara Bashir said she recognized the sample ballot. She said Foyes Ali is a family friend who helped her. She said Ali wrote the address on the mail-in envelope. She provided a blank white envelope on which he wrote the address to insert the ballot and mail, she said.

“I completed everything. He just instructed me,” revised Bashir.

Afia Begum said Taj Uddin helped her with her mail-in. She said Uddin is her cousin and that she just signed to vote. She was shown a sample ballot and indicated she did not receive that document in mail.

“I didn’t mark anything on a paper like this,” she said when shown the sample ballot. Then said she doesn’t remember.

Golam Matabbir said Foyes Ali helped him understand the mail-in voting process. He said Ali is a friend of his father’s.

Those 16 testimonies concluded the trial for this week. The trial will resume on Tuesday morning.

Assistors will be called in to testify and an investigator from the Passaic County Superintendent of Elections Office is expected to testify as well.