The city is considering raising parking violation fees – in at least one case for meter overtime from $18 to $40 – and authorizing the use of immobilization devices for vehicles with outstanding warrants, according to an ordinance before the municipal council. 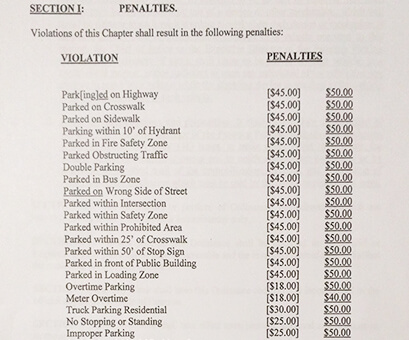 Other parking violations like parking vehicle on sidewalk and double parking are being increased by $5, according to the ordinance.

Council members expressed concerns about the hike particularly for meter overtime. Councilman Kenneth Morris said someone just one-minute shy of putting a quarter in could end up with a $40 ticket.

“That minute is going to cost them forty dollars,” said Morris on Tuesday night.

“That was based on comparable municipalities,” said business administrator Nellie Pou explaining the rationale behind the new fee schedule.

The ordinance states the city has the third lowest meter overtime penalty in New Jersey.

Morris said the 122-percent hike in parking meter overtime fine could deter residents from shopping in downtown Paterson. He said a person who is slapped with a $40 ticket for parking few minutes beyond the parking meter time will be less inclined to return to patronize downtown businesses.

The same ordinance also allows the city to utilize immobilization devices for vehicles with outstanding warrants found “operating or parked on a public highway, in a municipal parking lot, or on other property owned, leased, or under the control of the city.”

Council members have delayed a vote on the measure and told the administration to present a revised ordinance.

Council president William McKoy suggested the city’s provision that requires a vehicle be parked 50 feet from a stop sign be dropped or the distance decreased. He said the provision works well elsewhere, but not in densely populated places.

Jackson suggested revising the clause that allows the city to issue tickets to commercial vehicles over four tons parked on city streets. He suggested increasing the tonnage to eight tons.