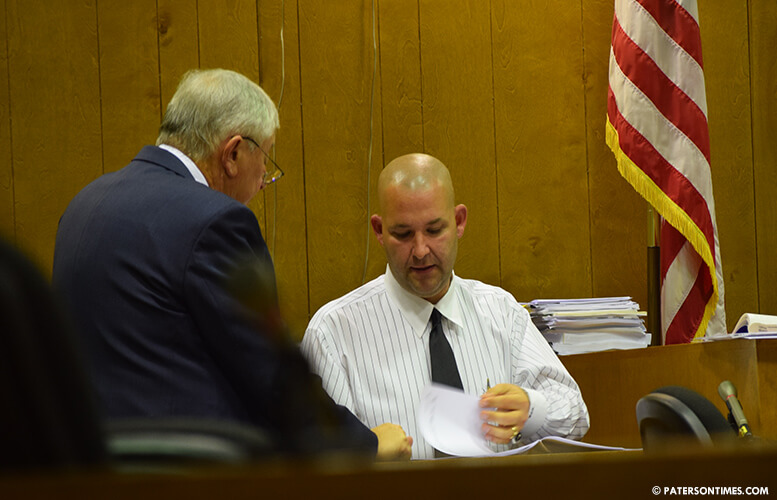 An investigator from the Passaic County Superintendent of Elections Office testified on Wednesday in the city’s 2nd Ward election fraud case stating two voters whose addresses on driver’s licenses were in Totowa voted in the May 10th election.

“This information is not certified by the MVC,” said John Carbone, attorney representing councilman Shahin Khalique. He raised a number of questions including the date and time when the records were looked up by the superintendent’s office.

Another voter, who cast a mail-in from the same Union Avenue address, received a ballot rejection, according to records. She owns the property at 13 Crestwood Court, according to public records.

Carbone cast doubt on the motor vehicle records by mentioning an example in which investigators made an error with another voter. There are two Rina Begums, who voted in the 2nd Ward election.

The superintendent’s office found the driver’s license for one. This one record was used on both of the individuals. The two Rina Begums had different date of births and addresses, but the same voter identification number.

Carbone tried to attribute the error to the motor vehicle lookup system being utilized. Hamilin said it was a “clerical error” in which the same motor vehicle identification information was put inside both women’s folders.

The investigator said the voter identification number was identical only in the investigation reports.

Khalique’s attorney vigorously objected to allowing Hamilin to take the stand. He said the investigator would share third party “hearsays” in his testimony or provide conclusionary statements.

Judge Ernest Caposela agreed to let Hamilin testify. He said he will have to determine whether the testimony is admissible in the case.

Investigators visited the home. The individual who resides at the property told them the aforementioned individuals do not live at the address. The superintendent of elections’ office mailed domicile questionnaires.

The questionnaires were returned to the superintendent’s office with a message from the post office: “Forward time expired, return to sender.” The message also included a Totowa post office box number.

There was also a green slip which indicated someone signed for the envelope. Susan Champion, who is representing former councilman Mohammed Akhtaruzzaman, said forwards expire in 90 days.

Champion said it’s “reasonable” to presume the Afroozs did not live at the address on election day.

Her conclusions were not accepted by Carbone or the judge. In between Hamilin’s testimony the court also heard from two voters.

Both voters — Rosaire Pierre and Gerard Pierre – testified neither of them voted in the May 10th election. Both are on record as having submitted mail-in ballots.

“I did not vote, I just signed a piece of paper,” said Gerard Pierre speaking through a Haitian translator. That piece of paper was a ballot, but he did not select any of the candidates.

Rosaire Pierre said she did not vote. She said the same individual brought the mail-in papers to their house for the entire family to vote.

The 2nd Ward election fraud trial is expected to resume at 2 p.m. tomorrow at the Passaic County Courthouse.