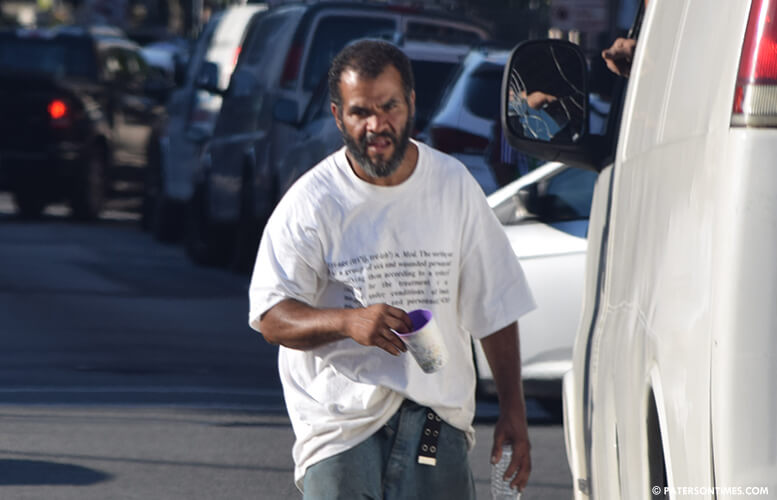 With scraggy men and women greeting visitors with a cup at just about every entrance to the city, council members on Tuesday evening called on police to clamp down panhandlers.

Council members said the number of panhandlers in the city appears to have increased. Some said the city seems to be the only municipality with this problem. Council president William McKoy said this problem doesn’t exist in Wayne, Fair Lawn, or even Clifton.

“Why is it that we can’t enforce the law? It makes our city look bad,” said McKoy.

Business administrator Nellie Pou responded the city has done sweeps to get a handle on the problem. “They are being arrested. As soon as they are arrested they come back to the street. And they are right back doing exactly the same thing,” said Pou.

The panhandlers are being dropped off into the city from elsewhere, said council members. Ruby Cotton, 4th Ward councilwoman, said some of them came to the city seeking drug rehabilitation, but dropped out of the program and have resorted to begging for money main thorough fares.

“This is a social, mental problem,” said Luis Velez, 5th Ward councilman. “Some of them succeed, some of them die. Let’s be a little bit compassionate.”

“How can we have them arresting panhandlers when they are handling more severe incidents like shootings?” remarked Michael Jackson, 1st Ward councilman. He said the problem could have been alleviated had the proposed mental health clinic out of the Paterson Health Department received a green-light.

Jackson said the council voted the clinic down. Council members rejected the mental health clinic pushed by health director Donna Nelson-Ivy citing the safety risks it would create for residents visiting the health department for service.

“This is a huge problem for our district. When someone gets off the bus, drives to downtown and they are approached by a panhandler they feel unsafe. They are going to turn around and go somewhere else. They are not going to spend their money here,” said Sheri Ferreira, director of the Downtown Paterson Special Improvement District.

“If we can’t solve the low level offenses how are we going to solve the larger ones,” said Ferreira speaking after the council’s discussion.

Sayegh said commerce is being adversely impacted in both thorough fares.