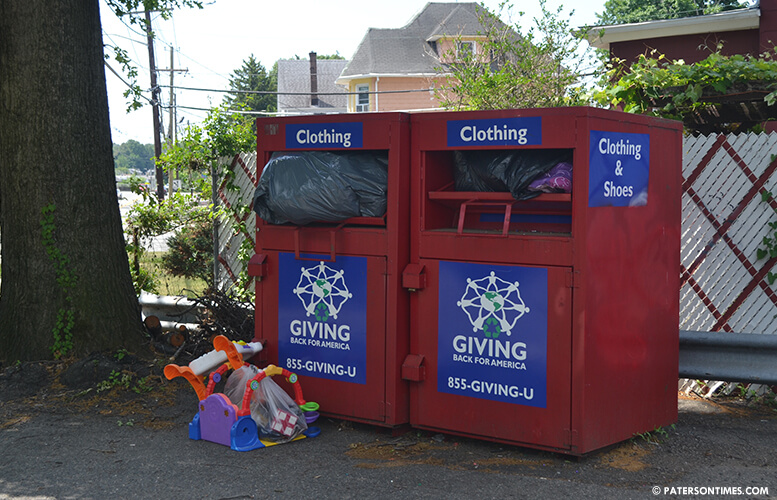 The unsightly clothing and shoe donation bins surrounded by mountains of garbage on just about every street corner in the Silk City could be a thing of the past after the city council approved an ordinance to regulate the clothing drop-off bins on Tuesday night.

Under the approved ordinance, organizations will have to obtain permits from the city by paying $250 annually. Those containers found without permits after 30-days of the ordinance’s effective date could face a maximum fine of $20,000.

The ordinance bans the placement of donation bins on public property, sidewalks, and streets. It allows for placement on private property with owner’s consent. Organizations with containers have 30 days to comply with the new ordinance, according to the local law approved by the council.

Roger Grier, a community activist, brought the container issue to light. He took a number of photographs, which showed accumulation of garbage around the containers, which highlighted the problem.

“We’re not going to see those containers all over the city anymore,” said Alex Mendez, councilman at-large, giving credit to Grier for bringing the problem to light. He said the ordinance includes a provision which requires the organizations to better maintain the drop-off bins.

“This will create revenue for our city. Any company that has to put a bin to collect items has to pay a fee,” said Luis Velez, 5th Ward councilman. There are hundreds of containers scattered throughout the city.

Majority of them are on major thoroughfares. Most of the bins bear the name of questionable charities like Children’s World Hope Foundation and Planet Aid.

Children’s World Hope Foundation came under investigation from television station WBTV in Charlotte, North Carolina. The news report states some of the information posted on the organization’s website was bogus. And it found the items collected using the donation bins end up being sold to a broker and little of that money remained to assist children, according to the news report published in 2013.

Planet Aid denied the allegations, according to media reports.

“This will beautify our city,” said Velez pointing to the clause that requires companies to maintain the containers or pay steep fines.