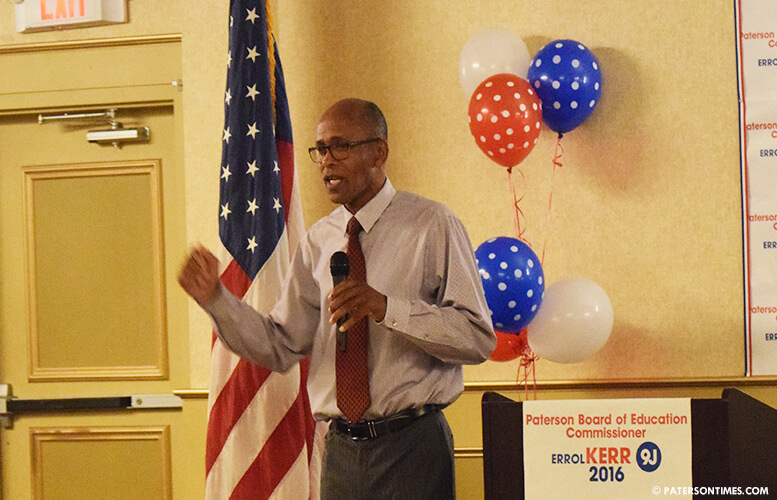 Errol Kerr came up short in last year’s school board election, but it wasn’t his time to go. He got back on the board after one of his opponents failed a background check creating a vacancy on the Board of Education.

He knows he got lucky last year. He’s not depending on luck this year. Kerr has been going after his opponent and detractors forcing them to defend their positions that he feels are damaging to the school district.

Kerr has slammed his sole opponent, Manny Martinez, for supporting charter schools. He went after school board president Christopher Irving for failing to consider a measure opposing the expansion of Passaic County Technical Institute (PCTI). He argues both expansion of charters and PCTI will cost the district millions of dollars that could be better spent providing resources to students.

Irving and Martinez were close allies on the board.

“If you’re so concerned about the kids, why are you running for just two years?” remarked Kerr with Martinez in mind on Thursday night at his campaign kick-off at La Neve’s in Haledon. “Why not three years, a full-term?”

“He’s coming out for council at-large!” shouted an audience member.

Kerr said he is defending the seat in which he served for the last 10 months. He was appointed to the seat by the Passaic County superintendent of schools following Kevin Michael Henry’s failed background check.

Kerr, 65, previously served three terms on the school board. Some of his colleagues and former school board members endorsed him for his re-election bid.

“His integrity is impeccable. I’m almost jealous at the principled nature of this gentleman. I thought I was principled until I met him,” said Hodges speaking about Kerr.

“He’s serious about education. Mr. Kerr does not want charter schools and neither do we,” said Abdullah.

“We lost him temporarily on the operation table, but he’s been resuscitated,” said McKoy speaking in front of 70 people at the banquet hall.

Several speakers lamented the election switch from April to November. “Education is too important to be tied to petty politics,” said Moody.

Teague, who is running to re-capture a board seat after losing last year, was one of the members who voted in favor of moving the election, but has regretted it ever since losing his seat.

“I didn’t get anything out of it,” said Teague.

“I learned my lesson,” said Teague. He said the move may bite others who voted in favor of switching the election to November next month.

Some of the speakers said the move was designed to give the local Democratic Party more control over the school board elections.

“We have factions on this board,” said Hodges without mentioning any names. He said one person on the board commands five votes – a likely reference to the school board president.

“Going rate seems to be a county job for a vote,” added Hodges making a reference to a recent new report about school board member Oshin Castillo being hired at Passaic County government in a position without any job description and no proof of job being advertised.

“We’re fighting against a machine. For me to win, I have to push as hard as I can with my machine,” remarked Kerr, who has three grandchildren in the school district, referring to the people in the room.

Kerr lost twice in 2004 and 2005, but was undeterred by the losses. He won a seat in 2006. A retired logistics operations manager, who worked at Glory Global Solutions, he has plenty of time to review and research proposals that come before the school board for a vote. He is working aggressively to get the logistics right to hold onto his school board seat.

“One of the things I see him do is reach out to the kids,” said David Warren, a city resident, a radio host in New York City. “And he’s committed to what he says.”