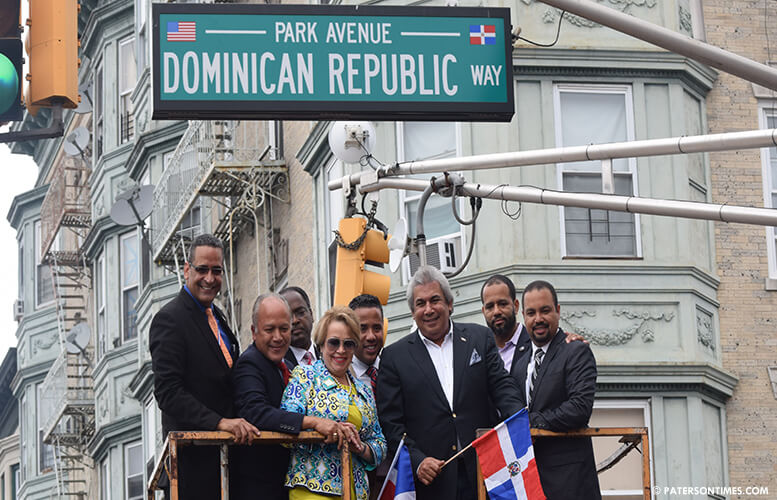 Almost 200 people attended the unveiling of the new street signs at the corner of Straight Street and Park Avenue. One of those attendees, Francisco Fernandez, said having a street named after his homeland makes him proud of his country and his adopted home.

“We’re extremely proud,” said Fernandez, who is a radio commentator on 94.5 FM, has called the Silk City home for 19 years. “Our country name will forever be on this city street.”

Edwin Ramirez, who coaches for the Paterson Baseball League, said youngsters of Dominican descent can look up and feel a sense of belonging and pride.

“It’s a positive thing for us,” said Ramirez, who has called Paterson home for the past 20 years. He said he immigrated to the United States for a brighter future. “This country gives you a lot of opportunity. It’s the best country in the world,” he said.

Consul general of the Dominican Republic Carlos Castillo, who represents the Dominican diaspora, received a large number of framed proclamations for his fellow countrymen and women.

“This serves as a testimony to the legacy and hard work of the Dominican community in Paterson,” remarked mayor Jose “Joey” Torres. The Dominican immigration to the city can be traced back to 1947 when the Mendoza family arrived in Paterson.

Torres’ brother Sammy Torres has also married a Dominican woman, said the mayor. His nephew is a mix of Dominican and Puerto Rican.

“This was long overdue. They will be proud every time they see it,” said Velez, who represents the 5th Ward, which is heavily Dominican. “The constituents are happy.”

Velez, who is Puerto Rican, has earned the confidence and affection of the Dominicans. This was clearly on display as every sentence he uttered in Spanish earned him applause from the crowd.

Velez organized the ceremony with Pedro Rodriguez, a Dominican-American likely to run in the next mayoral election, serving as master of ceremonies. Mendez was often relegated to the audience save for a brief moment when all the council members were allowed to make remarks at the podium.

“He wasn’t excluded. The community knows who came up with the idea,” said Velez, who received a medal from the New York branch of the Instituto Duartiano, a group dedicated to promoting Dominican patriotism.

Mendez said he did not feel slighted.

“It’s politics,” said Mendez, who is of Dominican heritage. He sees himself as the de facto leader of the city’s Dominican community.

The resolution renaming the street makes it clear the concept belonged to him, Mendez noted. Both Velez and Mendez battled over who should receive credit for the renaming.

“The most important thing is that the project is complete,” said Mendez.