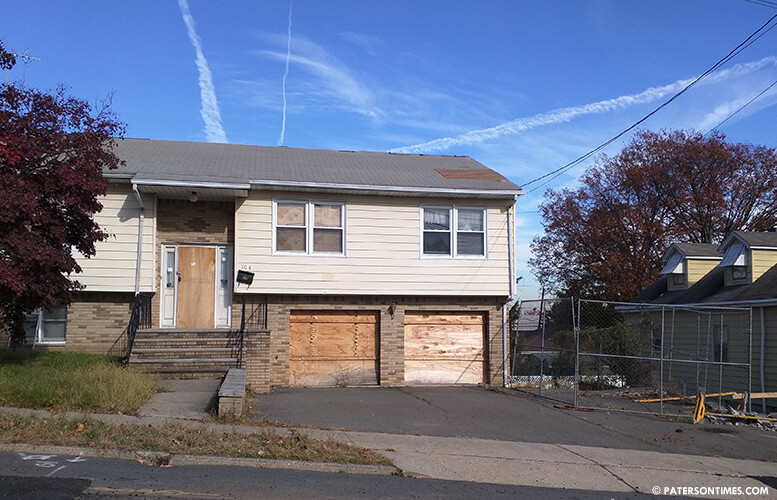 More than five months after the city obtained possession of a problematic Sherwood Avenue property through a court order, the man who resides next to the home once owned by disgraced former mayor Martin Barnes’ family is wondering whether the city will rehabilitate the property anytime soon.

“I have been trying to get this problem fixed for 12 years,” said John Villari, who lives next door to the derelict property, to council members last Tuesday. He praised mayor Jose “Joey” Torres’ administration for going through the arduous court process and using newly passed abandoned properties ordinance to take possession of the property.

Paterson was given possession and control over 304 Sherwood Avenue on June 14th, 2016, according to court records. “I have not seen any improvements to that property since they took possession,” said Villari.

Villari distributed to council members and reporters the rehabilitation plan the city submitted to the court prior to receiving possession and control over the long abandoned single-family home whose deed states it is owned by Gregory Barnes and Cathy Sims.

The Barnes family long left property and the mortgage company, Bayview Loan Servicing, relinquished possession of the home in the desirable Hillcrest section to the city. The plan states the city dedicated $150,000 to rehabilitate the derelict property by repairing a collapsed underground pipe which caused a retaining wall to fall.

Villari, who has attended numerous city council meetings over the years to get this property addressed, wanted to know the status of the promised rehabilitation work.

“When I try to go to the appropriate office, I get no response,” said a frustrated Villari. Business administrator Nellie Pou said she did not have an update with her at the time and was unprepared to answer questions relating to the property.

“We’ve come close to resolution. We need to stay on top of it to get it done,” said council president William McKoy. He wanted a status report from the administration.

Pou said the city will provide the council president and his colleagues a status report on the property in two weeks. She said the project is under the charge of economic development director Ruben Gomez.

Gomez did not respond to multiple calls for comments.

Luis Velez, councilman at-large, said there was a status report that was provided to the Economic Development Committee. He said the city went out to bid, but the bids came in too high.

“It came in higher than we expected,” said law director Domenick Stampone on Monday morning. He said the city may have to find another way to rehabilitate the property – one option is to use city workers to handle the work.

Another option is to petition the court to allow the city to sell the property to a developer to rehabilitate it, said Stampone.

When will the property be rehabilitated? It’s anyone’s guess.

Villari has been lobbying to get the home rehabilitated because he fears the collapsed underground pipe will one day burst and flood his property and possibly the neighborhood.