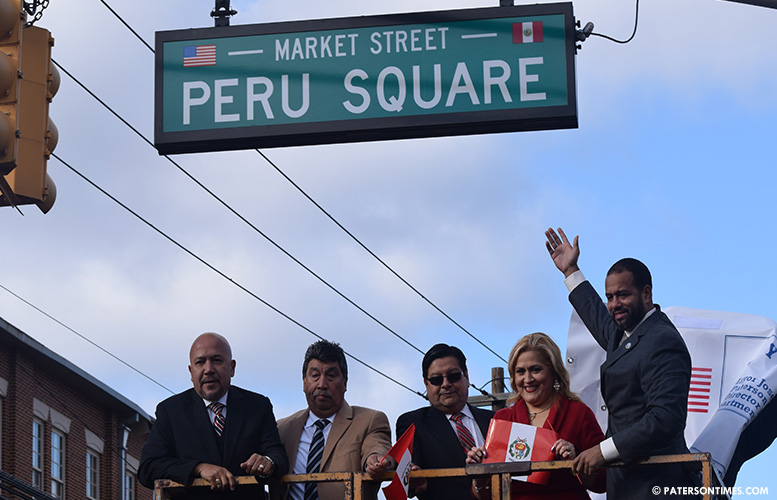 “I’m so happy,” said Jhair Sala, who emigrated from Peru to the United States in 1999, after the new sign was unveiled on Saturday afternoon officially designating a little area bordered by Mill, Market, Main, and Cianci Streets as Peru Square.

“It’s a very big deal. This is the capital of Peru outside of Peru,” said Sala.

“It makes us feel like we’re part of this city,” said Christopher Medina, 17, a student at the Passaic County Technical Institute (PCTI). “It makes Peruvians stand out.”

“A lot of people were waiting for this,” said Pablo Canela, a guitarist, who put on traditional Peruvian music at the event. Singer Mariela Valencia put on a performance that had several people dancing at the square including the city’s first Peruvian-American councilwoman Maritza Davila.

A group of young people performed the marinera, a traditional Peruvian couple’s dance. Their well-choreographed dance received sustained applause from the attendees.

“You could feel the warmth from Peru here,” remarked Torres, playing on the general complaint of nippy autumn weather. “We recognize the contributions the Peruvian community has made on Market Street for many years.”

Sala said his family remains in the city due to the close-knit community and the shops that offer ethnic food and ingredients.

Vitaliano Gallardo, consul general at the Consulate General of Peru in Paterson, said Peruvians have been arriving in the Silk City since the 1920s. He provided a newspaper clipping that stated among those early birds was Victor Tarazona who arrived in 1926.

Tarazona states in the newspaper article that at the time of his arrival there were just four Peruvians living in Paterson. That number has grown to 30,000, according to the resolution passed by the municipal council designating Peru Square.

As the crowd filled the intersection blocked off by police, it was apparent a segment of the city’s Peruvian community was absent. The Peru Square Association, the group that lobbied for the designation by collecting and submitting petitions and protesting delays was not present at the ceremony.

Nelly Celi, spokeswoman for the Peru Square Association, said the group was not formally invited to the event. She said she learned about the ceremony through a third-party and a social network posting.

Davila said the group was sent an invitation. She provided a copy of a letter dated November 21st, 2016 that was sent to Celi. “I would like to invite you and your organization to attend the Peru Square Street Naming Breakfast Ceremony on Saturday, November 26, 2016 at 10 a.m. at the Panchitos Restaurant, located at 54 Market Street, Paterson, NJ. The unveiling of the Peru Square will take place at 12:00 noon on the corner of Mill and Market Streets,” read Davila’s letter.

“Yes, she invited us as her guests to the breakfast. We had asked to be part of the street sign ceremony not the ceremony for the deputy mayor,” said Celi when shown Davila’s letter on Saturday.

Celi sent Davila a letter on November 23rd, 2016. The letter stated the group received no formal invite to the event. “As you may recall, about 1 month ago, we spoke and you assured me that when the street sign arrived and a date was scheduled you would contact me, community members and all interested parties to participate in the planning and actual ceremony,” read Celi’s letter. “I am writing to share our concerns and ask for an explanation as to why the exclusion of Peru Square Community Association. All we have asked for from the beginning is to be a part of the ceremony once the street sign was received.”

Celi suggested a meeting to iron out issues, but the meeting never materialized, she said.

Davila noted she publicly credited the group and several members including Celi at Saturday afternoon’s ceremony.

The friction between Davila and the group was on display in January of this year. Davila was displeased the group handed in petitions to her political adversary former councilman Mohammed Akhtaruzzaman.

“She cannot remain upset about something that is over and done with. This new situation just makes things worse,” said Celi. The group says it simply had a cordial relationship with Akhtaruzzaman and sought his guidance on getting the petitions submitted.

This is not the first time a street naming went awry. A similar scenario unfounded two years ago when the council sought to rename Van Houten Street sparking protests at council meetings, a federal lawsuit, and divided the city’s Bangladeshi-American community.

The turnout for Saturday’s event would have been much higher, suggested Celi, had the event been planned with inclusiveness in mind. “Many people didn’t go because they were upset at the disrespect shown to us,” said Celi.