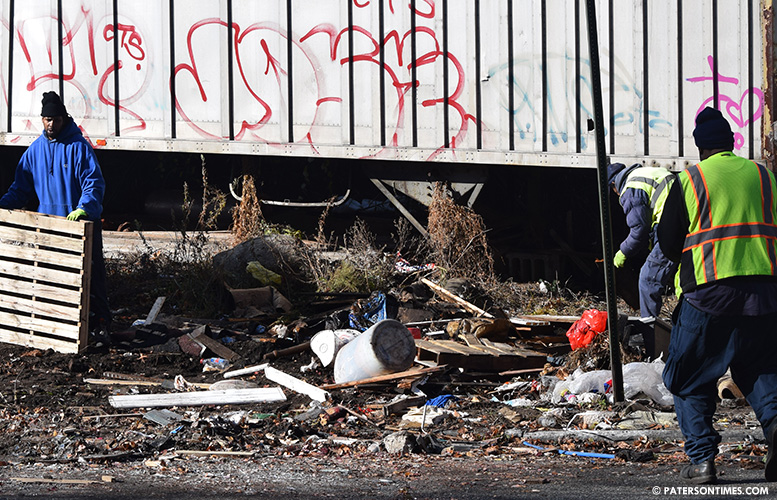 A dozen city public works employees cleaned up a large lot, long described as an eyesore, at the corner of Summer and Keen Streets after the city declared it an “imminent hazard” to the health and welfare of neighborhood residents on Thursday morning.

City heavy equipment operators hauled several payloader worth of refuse from the lot. It was strewn with tires, beds, carpets, debris, and a variety of other garbage. There was also several tractor trailer containers at the site.

Two men turned a container on the lot into living space. Both scurried from the space upon the arrival of public works employees.

“We had people sleeping inside that yellow container,” said William Rodriguez, general supervisor for the streets and roads at the Department of Public Works, pointing to a container without wheels.

Rodriguez wondered how that container was brought to the location.

Eight laborers raked the lot, removed tires, and dragged carpets to the closed off road for the payloader to haul into a dumpster.

“It was absolutely bad,” said Ruby Cotton, 4th Ward councilwoman, who arrived at the scene as public works employees were clearing the lot. “It’s horrible that people have to live next to this.”

Across the street from the lot is a senior housing complex. Cotton said she has received numerous complaints from neighborhood residents particularly from those living inside the Nathan Barnert Residence.

The lot reeked in the summer forcing the city to clean it up. In matter of months, the cleaned lot filled up once again with garbage of all types, very likely dumped on the unfenced property.

Ellen Heines, owner of the property, in July told the Paterson Times, the property “always had a dumping problem.” She appeared in court in July, but the Paterson Municipal Court had to transfer the case to Clifton court to avoid a conflict because she has a pending lawsuit against Paterson.

Community Improvement Division inspectors issued numerous violations to Heines for her unkempt and “filthy” property. Cotton said she failed to appear in court when the case was transferred and a bench warrant has been issued.

“The complaints are piling up. It’s a filthy hazardous place,” said Octavio Aguilar, chief inspector for code enforcement division of public works. He said the property was declared an “imminent hazard.”