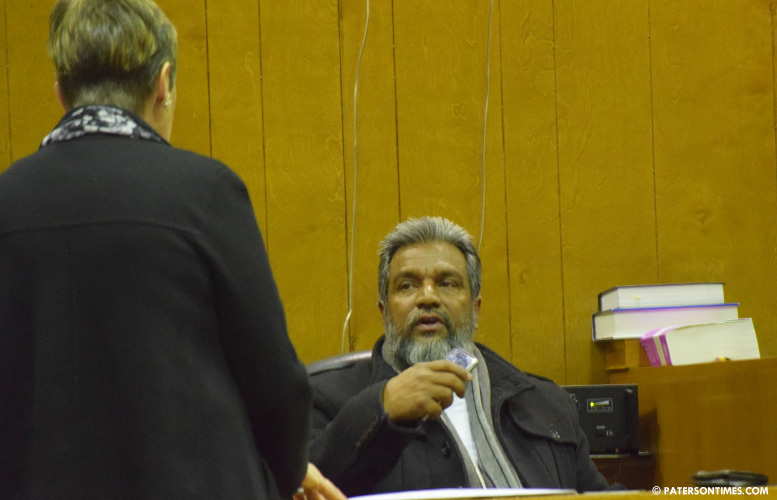 Mohammed N. Islam’s wife and children reside in Maryland. His three vehicles are registered in Maryland. His driver’s license is issued by the state of Maryland. He testified in the 2nd Ward election fraud trial on Friday morning and stated he resides at a house on Paterson Avenue in Paterson.

“Are you separated from your wife?” asked councilman Mohammed Akhtaruzzaman’s attorney Susan Champion.

“No,” responded N. Islam (pictured). He said he has a slaughterhouse and a cattle farm in Maryland. He said he visits his wife and children “all the time.” He claimed he resides on the first floor of 44 Paterson Avenue, a house owned by his brother Maidul Islam, a correctional officer at the Passaic County Jail who ran an unsuccessful campaign against Akhtaruzzaman in 2012.

Champion was trying to prove N. Islam voted in 2nd Ward election while not being domiciled in the ward. She had him show a driver’s license that listed a Maryland address as his home. The license was issued on December 21, 2015. He said prior to that he had a New Jersey license — before the state instituted digital driver licenses with photographs.

Councilman Shahin Khalique’s attorney John Carbone countered the driver license argument by providing image of a mailbox with his N Islam’s name on it. He also said N. Islam is a member of the Islamic Foundation of New Jersey, a mosque on Van Houten Street. Carbone said N. Islam was also elected to the mosque’s board.

“Is that also your residence?” asked Stephens referring to the Maryland address.

“Yes,” responded N. Islam. He said he stays there couple of days a week.

“What made you decide to move your license over there?” asked Stephens.

“Insurance is cheaper over there,” responded N. Islam, who should not be confused with the other Mohammed N. Islam, who recorded Khalique saying both insurance and election fraud were “not a problem.” Stephens asked how many vehicles he owns. N. Islam said he has three vehicles. Stephens asked where the vehicles were registered. N. Islam said they were registered in Maryland.

N. Islam said all three vehicles were insured in Maryland. Stephens asked which address he uses to file his federal income tax. N. Islam said he uses his Maryland address.

“When you file your Maryland tax return which address do you use?” asked Stephens.

“Maryland address,” responded N. Islam. Under questioning, he said he has been filing Maryland income tax returns since 2005. The last time he filed a New Jersey tax return was in 2004, he said.

“Why do you have a Maryland license?” asked Stephens.

“The insurance over there is really cheap,” responded Khairul Islam. At one point, Khairul Islam appeared to undermine his brother’s testimony by stating his two brothers live at the Paterson Avenue address only to quickly correct it to three.

The Islam brothers said they own the Islam Brothers Slaughterhouse on East Railway Avenue and Medina Halal Meat on Lehigh Avenue in Paterson.

There were three other voters who testified.

“I don’t remember anything,” said Mohammed S. Ahmed, when asked whether he voted in the 2nd Ward election in May 2016. “I’m feeling very shaky.” He said his father was suffering from cancer at the time that ultimately claimed his life.

“I was running around. I was very busy at the time,” said Mohammed S. Ahmed. He said his family told him his vote was cast for Khalique. He is listed as having voted through a mail-in ballot.

Rashida Younus said she lived at 197 Preakness Avenue on Election Day. When asked when she moved to Totowa, she said, “Just after election.” She contradicted her testimony several times when asked about a domicile questionnaire that had her signature.

“You said some of the hand writing was yours,” inquired Champion.

“I just wrote my name and signed,” said Younus. The deputy attorney general asked her when the questionnaire was completed. She said it had to be sometime in the summer. In that questionnaire, completed in the summer, pointed out Stephens, her husband wrote she had been living in Totowa for five months. This would suggest she did not live in Paterson during the election.

Mohammed Jamil Hossain’s driver’s license issued on March 30, 2015 had 87 Jasper Street in the 1st Ward as his home address. He voted from 76 Paterson Avenue. He testified that he moved to Jasper Street on May 31st, 2016.

Passaic County assignment judge Ernest Caposela expressed great frustration at the slow pace of the trial. The trial started in September of last year, but shows little sign of concluding anytime soon. He was particularly angry at Champion for the slow pace at which she brought witnesses to the stand.

Caposela scolded the attorneys in the case for their slowness and for his staff having to constantly take on duties like making copies for the lawyers. The attorneys were also slowing down the trial by sifting through reams of evidence to find documents.

“I don’t feel like a judge at all. I feel like an investigator,” remarked Caposela. “It’s not typical of what the court does.”

The judge has said he wishes to see the case concluded by late February. He will be spending much of January hearing testimony from the remaining witnesses called to the stand by the former councilman.

There was a “small village” of witnesses outside of the courtroom waiting to testify on Friday. The judge directly addressed the witnesses. He said he understood their frustration of having to wait outside for hours. He had Champion schedule them five per day to move the case along.

The trial will resume on January 12th, 2017 at 9 a.m. at the Passaic County Courthouse.