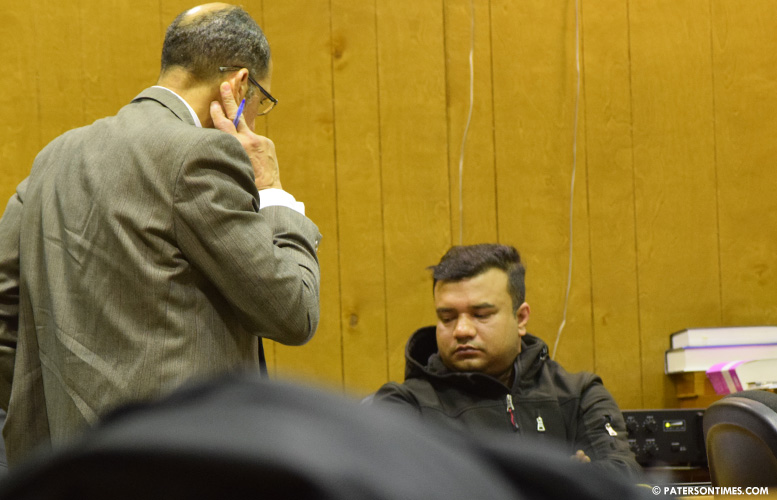 One witness, who owns a property in Haledon and claims to occupy an apartment from a distant relative on Walnut Street in Paterson, said he saves as much as $500 every six months by using his Haledon address on his car insurance policy.

Nuruzzaman Suhel owns the property at 335 West Clinton Street in Haledon, but does not reside at the home. He said he lives at 227 Walnut Street – a property owned by his distant relative Joyed Rohim, a board of adjustment member who last year said he is related to councilman Shahin Khalique.

“Why do you file your federal tax return from the Haledon address?” asked deputy attorney general Alan Stephens.

“Last year, I received my W2 at that address,” responded Suhel (pictured). He purchased the Haledon property on Jan. 23, 2015, according to government records. He testified that he never resided at his Haledon home. He said his parents live at the home and he often visits.

“Why would you tell your employer you lived there?” asked Stephens. He then asked why Suhel was using the Haledon address on his vehicle registration and car insurance.

“Sure does,” remarked the deputy attorney general.

Former councilman Mohammed Akhtaruzzaman’s attorney Susan Champion called Suhel to the witness stand to prove he voted in the 2nd Ward election without residing in the ward. Wasn’t he served court papers at the West Clinton Street address? asked Champion.

“Yes,” replied Suhel. He also signed for a certified letter that was delivered to the Haledon address in June 2016. She also showed a “forwarding time expired” document from the United States Postal Service which suggests he was forwarding mails from the Paterson address to Haledon.

The Passaic County Superintendent of Elections sent a letter to the Walnut Street address on June 28th, 2016 which prompted the USPS to issue the forwarding time expired notice. Champion tried to argue the forward expired means he was not living at the Paterson address for months prior to the May election.

Champion asked if he setup the forward and when. “I don’t remember,” responded Suhel.

Carbone asked where he lived on May 10th; Suhel said Walnut Street.

Ahmed said he lived at 272 Union Avenue, but moved to 13 Crestwood Court in Totowa in the first week of May 2016. He said he voted by mail on March 28th, 2016. He proved he lived in Paterson’s 2nd Ward and qualified to vote by showing a driver’s license that was issued on May 3rd, 2012 and expired on April 30th, 2016 bearing the Union Avenue address.

Champion also questioned the residency of a couple — Misbah Uddin and Majeda Begum — who voted from 372 Union Avenue. Uddin said he moved to 25 Cliff Street in Haledon after casting his vote in the 2nd Ward election.

Uddin said he lived at the Paterson address until May 2016. Didn’t your landlord tell you to leave in February 2016? asked Champion. Uddin replied in the affirmative, but stated he remained at the Paterson location because the Haledon home did not have gas or heat which prevented him from moving in.

Champion asked when his family moved to Haledon. “I don’t know. My head is not working. My head is spinning,” replied Uddin. He said he was in the emergency room the previous day due to illness. Uddin was a tough case for the lawyers for his contradictory statements.

Uddin said he went to the polls and vote, but also said he voted using a paper ballot. He signed a vote by mail application on April 5th, 2016.

“Have you ever resided in Haledon?” asked the deputy attorney general. Uddin said he lived there for five days. He said he now lives at 105 Totowa Avenue after he was separated from his wife.

Golam Choudhury, owner of the Haledon home, said the couple was expected to move into the home in Feb. 2016, but heating problems delayed the move to June 2016. He had previously given a written statement that said Uddin’s family resided at his property on March 1st, 2016. When asked about his previous statement about the Uddin family’s residence, he said: “Honestly, I didn’t check the paper.”

Choudhury said he signed a blank document that was brought to him by someone named Tipu Sultan. He said he signed the document after the election stating the couple lived at the home.

The trial which has been running since September resumes on Feb. 1st, 2017 at the Passaic County Courthouse.