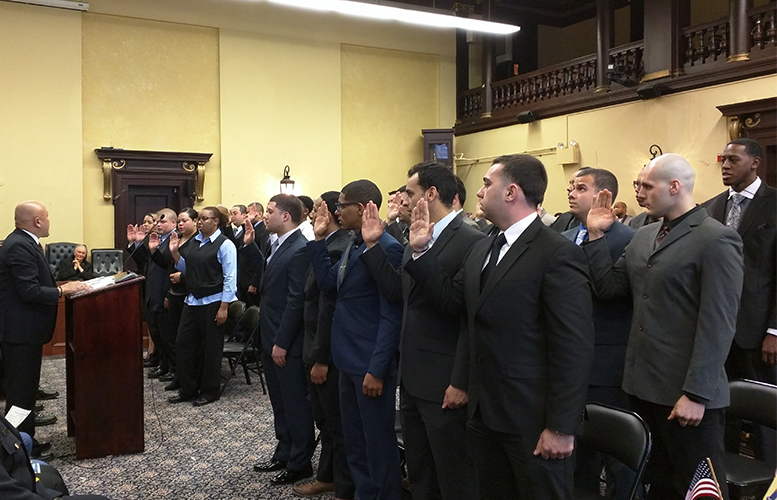 Hours after the city swore in 30 new police officers, council president William McKoy questioned whether any of the recruits were city residents.

“I got some calls of folks saying, ‘Who are these people? Are they from Paterson?’” remarked McKoy earlier in the month. “They don’t look that way. What a Patersonian looks like I don’t know, but they didn’t meet the description.”

Speziale said the recruits applied for the positions almost two years ago. He said 150 applied for the open positions. Of that number 50-percent were removed from the list for failing to sign for a letter that was sent to their Paterson homes instructing them to come to police headquarters for their application packet, he said.

The director said the city did not have to do a return receipt for sending out the letter, but it took the additional step to ensure city residents were being hired for the positions. “We made sure we got people that followed the rules and were Paterson residents. Are some not Paterson residents at the current time, absolutely,” he said. “I send you a registered letter with return receipt, you signed for it and you’re at that address how can I say you’re not?”

Speziale said there was one applicant who lived in Pennsylvania. He said this individual had to be disqualified because New Jersey law requires all police officers to be state residents. The issue of requiring police and firefighters to reside in towns where they are employed is not a new one.

Newark mayor Ras Baraka attempted to require public safety employees to reside in his city. A measure was introduced in the New Jersey Legislature to allow towns to require new police officers and firefighters to live within the communities they serve for five years, but the law, after being passed by the senate and the assembly was vetoed by governor Chris Christie.

The city welcomed the 30 new police officers during a swearing in ceremony on January 17th, 2017. McKoy said he and other council members were unaware the ceremony was taking place. Council members Michael Jackson, Alex Mendez, and Ruby Cotton were briefly present at the ceremony.

Cotton said she learned about the swearing in on the same day when she came to her City Hall office.