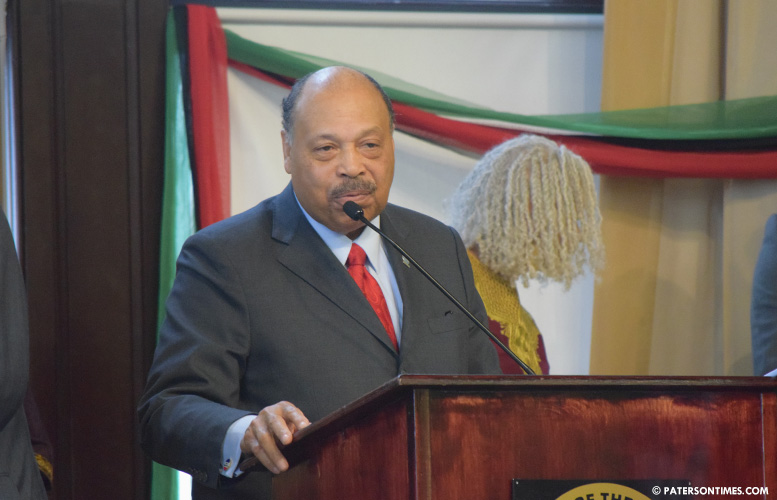 The city recognized eight people in its annual Black History Month celebration inside the City Council chambers on Wednesday afternoon.

Five men, two women, and one boy were each given a framed resolution recognizing their achievements and contributions to the local community.

The most controversial honoree, New Jersey Democratic Party chairman John Currie, whose nomination was almost blocked by councilman Michael Jackson, thanked the officials of his hometown for the recognition.

Jackson sought to block Currie’s nomination on ground that honoring the chairman would politicize the event. He also argued the chairman has not done enough to improve the lot of city residents. Jackson’s colleagues pointed to the chairman’s achievements and his work paving the way for African-Americans to successfully claim elected position in all levels of government.

Currie, who grew up in the Christopher Columbus Public Housing Projects, said his life mission has been to improve the city and the county. “I’ve always tried to make Paterson and this county a better place for all people and particularly for African-Americans,” he said. Under his leadership, the party took charge of the entire Passaic County Board of Chosen Freeholders. It was under his watch that Democrats took over the Passaic County Sheriff’s Office for the first time in 50 years in 2001, according to the resolution. The resolution also states he helped to elect Corey Booker, the first African-American U.S. Senator from New Jersey.

He also reflected back on his youth to tell young people they can rise above their circumstances. “It doesn’t matter where you start, it only matter where you are going,” said Currie. One boy, who got the message long prior to hearing the chairman’s speech, was 13-year-old Jahmeir Wilson, who was among the honorees for his work in creating a foundation to deliver presents to children with incarcerated parents.