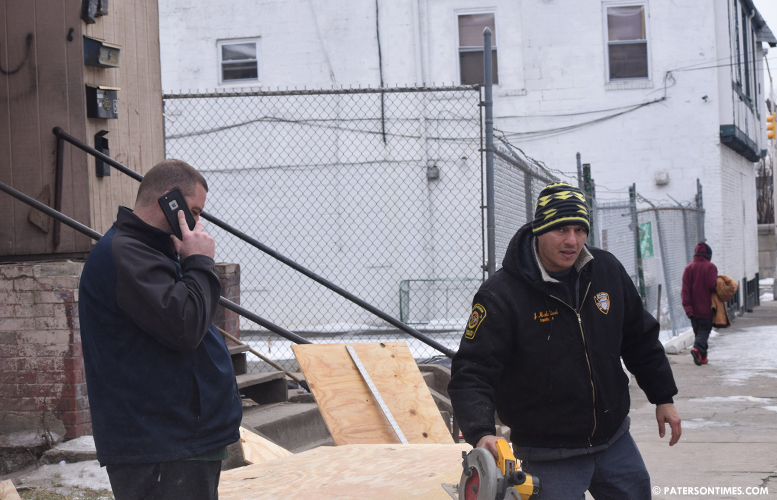 The city boarded up a decaying house on Auburn Street on Tuesday morning that is known in the neighborhood as a crackhouse where one boy was killed and a second was wounded earlier in the month.

As public works employees were nailing boards to the windows and doors of 87 Auburn Street a ragtag bunch was running in and out of the house carrying garbage bags filled with their belongings.

“It was empty yesterday,” said David Gilmore, director of the Paterson Community Improvement Division. His division cited the building as an imminent hazard due to a lack of suppression system, he said, soon after the Feb. 4, 2017 shooting that claimed the life of a 16-year-old boy and left a 17-year-old boy wounded.

A police officer standing at the entrance of 87 Auburn Street as the house is being boarded up on Feb. 14th, 2017.

10 people scurried out of the building when employees from Community Improvement and Public Works appeared on the scene to board up the structure. One man protested to Gilmore saying he lived in the building for two years.

“We don’t have anywhere to go,” said a man who identified himself as Donald Murphy. He said he lived in the building for two years with his wife by paying $600 in rent to a “Jack,” whose last name he did not have.

The building is owned by Ian Ralston, according to city official. City tax records list the owner as Grean Feri, LLC of 20th Avenue. The owner has been issued a summons, said an official.

Gilmore referred Murphy to the Paterson Relocation Assistance Office. Murphy persisted with his questions. He appeared to see no issues with living inside the two-story house without electricity or gas.

“Do you think you should be inside with no electric or gas?” asked Gilmore.

The drug addicts who used the home will likely pry open the boards and re-occupy the structure. The home was also used as a distribution point for a local street gang, according to officials.

“We constantly have to come out and board it up,” said Octavio Aguilar, chief inspector for code enforcement division of public works, pointing to a boarded up home few doors down and across the street on the same block.

“It’s going to be this way until the owner decides what he’s going to do with it,” said Ruby Cotton, 4th Ward councilwoman. She said the home has been a major problem in her ward. Over the past year, police have made numerous drug busts at the location.

The home was also the site of a shooting last month. A 26-year-old man was shot in the leg on the first floor of the home, according to police.

Cotton said she hopes police will pay special attention to the boarded up building to ensure drug dealers and addicts do not re-occupy the structure.

Police director Jerry Speziale could not be immediately reached for comments for this story on Tuesday morning.

The large number of abandoned structures in the 4th Ward has contributed to the proliferation of drugs in one of the roughest parts of Paterson.

There are half-dozen burned out and abandoned structures within less than two blocks of the Auburn Street building. Many of these structures are being used by drug fiends. One scruffy man was shooting up drugs at the abandoned building next to the church on the corner of Auburn and Fair Streets. Gilmore said that building is on the list for demolition.

“Occupying these units unauthorized leads to more problems,” said Gilmore. He said that’s what results in fires at abandoned buildings and sometimes violence as happened at 87 Auburn Street two weeks ago. “It’s our job to ensure the security and wellbeing of the community,” he said. He said inspectors will follow-up tomorrow to make sure the building remains boarded up.