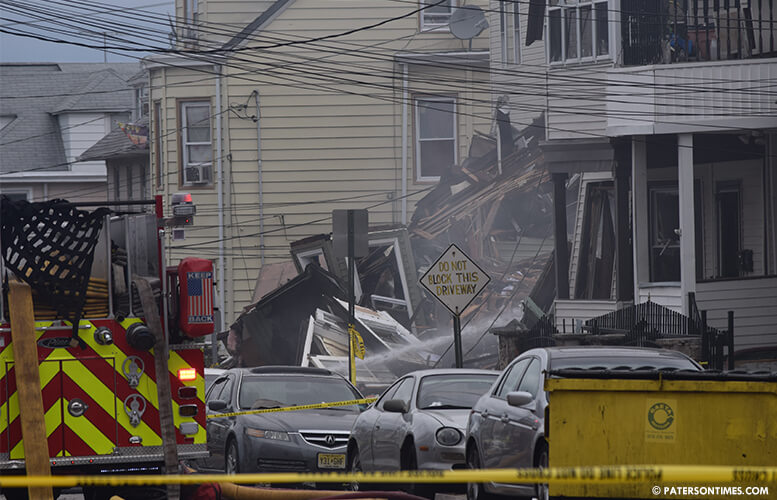 Six months after his company demolished the home that was the source of a massive gas explosion in South Paterson, Bill Vecharello’s firm only last week was approved to receive payment.

Council members approved $74,775 to pay Wayne-based Vecharello Contracting for the emergency demolition of the Goshen Street house and a Godwin Avenue building.

“Just please guys, five months is way too long to get paid. I can’t wait five months. I got to feed my family and pay mortgage on my house. It’s too long,” said Vecharello in a brief candid speech to the City Council last Tuesday. He said small businesses like his have to pay their workers and delays make doing business difficult.

Vecharello said the difficulties worsen when the job is complex as was the case with Goshen Street demolition. He said that job required asbestos removal and air quality testing.

“You’re losing quality contractors on all of the bids not just on demolition,” said Vecharello. “People don’t want to bid.” He said other contractors laugh at him when he tells them he handles jobs for the Silk City, his old hometown.

“If it doesn’t come as a resolution we can’t vote on it,” replied council president William McKoy. Council members received the resolutions in February. He pointed the finger at the administration for bringing the resolutions late to the council.

McKoy has often wondered why so few companies bid on major contracts that are sometimes worth hundreds of thousands of dollars.

Mayor Jose “Joey” Torres recognized the city has a problem paying its contractors on time. He noted Paterson-based Feldman Brothers Electrical Supply Company refuses to do business with the city for late payments.

“It’s something you really got to work on,” said Vecharello. “Ultimately, it’s costing you money.”

The firm demolished badly damaged and collapsing the three-story home at 16 Goshen Street on October 4th, 2016. His company also helped to properly dispose of all debris, including some containing asbestos. It also spread clean fill, removed sewer lines, installed new sidewalks, and constructed a fence with a gate, according to city records.

Vecharello’s company also aided authorities in their investigation of the gas line explosion. The firm charged $50,775 for the demolition.

The city called six other firms for the emergency demolition job, but none of them responded, according to city records.

Vecharello’s company also handled the emergency demolition of 175 Godwin Avenue. He was paid $24,000 for that job. Four firms responded for that job, but his company offered the lowest price, according to municipal documents.

The building at 175 Godwin Avenue collapsed in mid-November after a fire requiring emergency demolition.