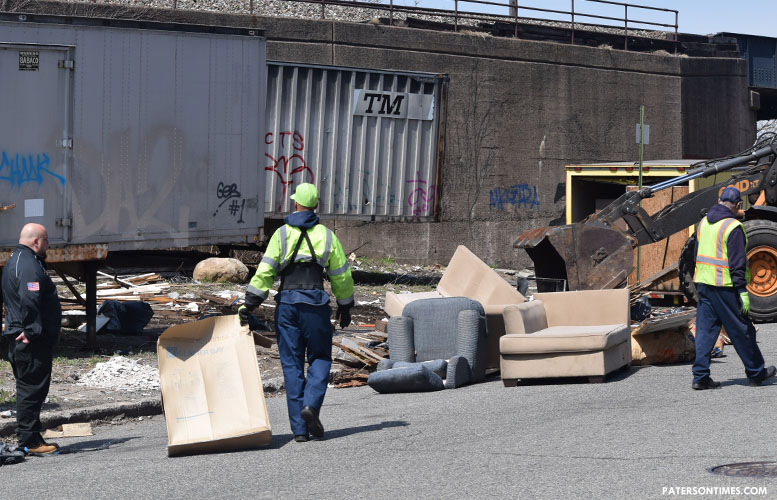 The city once again cleaned up a private lot used for dumping on the corner of Summer and Keen Streets on Monday afternoon.

Public works employees removed couches, debris, doors, large pieces of wood, boxes, and other garbage from the lot that has become a smelly and ugly sight for seniors living across the street at the Nathan Barnert Senior Housing Complex.

Ellen Heines, owner of the lot, will be given two summonses for failure to maintain her property and obstruction of roadway, according to sanitation inspector Tim Cobb. She will also have to repay the city for expenses incurred in cleaning up her unfenced lot, according to city officials.

The city has had a tough time holding Heines responsible for the property. She has been uncooperative in installing a fence around the property to put an end to dumping, according to city officials.

Heines has said in the past the property “always had a dumping problem.” A phone number was not available on Monday to get her input for this report.

“It’s totally ridiculous we have to go out again and clean up this area,” said Ruby Cotton, 4th Ward councilwoman. She has been fed up with receiving complaints about the garbage that accumulates on the lot soon after the city cleans it up.

Cotton has also received complaints from seniors living across the street. As the weather climbed above 65 degrees on Monday some of the seniors were out in the yard area of the apartment complex.

“It’s about time for somebody to come clean it up,” said Alfred Purris. He said in late spring and the summer the garbage from the site reeks badly making it almost unbearable for apartment residents to sit at the benches in the yard.

“The city should force the lady to put a fence,” said Vincente Diaz. The property owner has been uncooperative, according to city officials, so much so she has filed a lawsuit against the city alleging inspectors violated her rights by going into her property to clean it up.

Purris and Diaz both live at the apartment complex. “It’s getting nice. They’ll sit out here and they shouldn’t have to smell that,” said a nurse, who works at the building. The nurse did not provide her name.

“People sleep in that trailer there,” said Purris pointing to a container. In fact, last summer when city employees visited the site for a clean-up, some homeless men were found sleeping inside a container at Heines’s property.

“They do it at night when no one’s around,” said Purris explaining the overnight accumulation of garbage soon after the city cleans up the location.

William “Billy” Rodriguez, a public works supervisor, said he saw Heines drive to the location on Monday morning to discard materials at the site.

Cotton said she wants the city to setup cameras in the vicinity to capture those who are dumping at the site and ticket them. The city cannot install cameras at the private lot at 28 Summer Street; however, she said it can install them in the vicinity. “They can put it on the outside on the sidewalk to catch people,” said Cotton.

The councilwoman expressed deep frustration in getting this problem lot under control. “The question is where are we at the court with this property owner?” she asked. Heines appeared at the Paterson Municipal Court last year, but the case had to be moved elsewhere due to her lawsuit against the city.

Heines’ case has been moved to Clifton. A court date is scheduled for April 24th, 2017 at 8:45 a.m. at the Clifton Municipal Court, according to the court administrator in the neighboring town.