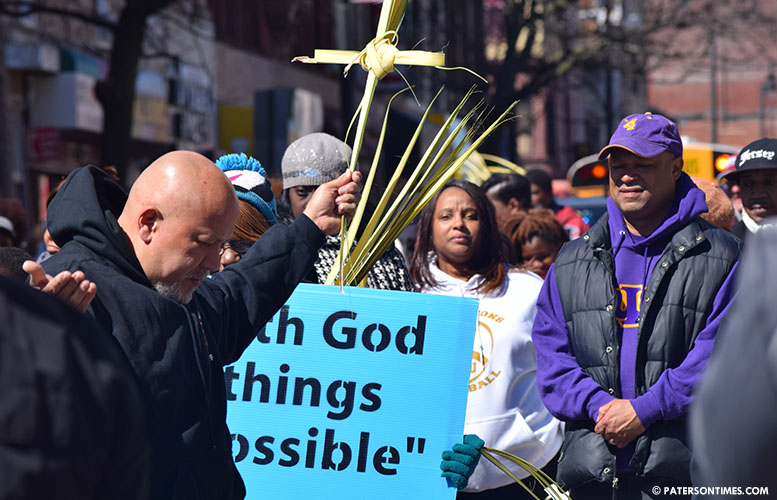 Evelyn Curry approached the intersection of North Main and Arch Streets, unfurled a cloth banner bearing the image of her son Shareek Curry, and began to weep. Her son was 33 years old when he was shot in that corner, she said.

“He just went out to get some breakfast and got shot up,” said Curry as tears rolled down her face. “How senseless can that be?” She is raising her son’s 4-year-old daughter and 14-year-old son.

Curry was among 210 people to march from the Riverview section through downtown Paterson to the Wrigley Park neighborhood. Community leaders, families of shooting victims, chanted, “Ceasefire! Stop the shooting!” as they marched from Cobb Park on East Main Street to Auburn Street.

The march covered the city’s roughest neighborhoods in the 1st and 4th Wards. Marchers stopped at the location of each killing to place a palm stalk and pray for the dead. “We want them to find peace. There’s a murderous spirit in the city,” said Sylvia Farrar of the Ceasefire community group.

Farrar stayed at the head of the march with a sage smudge. She was using the burning sage bundle to purify each block as the marchers passed through. The marchers stopped at the drug house on Auburn Street where two teenagers were shot – one was killed.

Ka’Sir Davis, 16, lost his life at the house at 87 Auburn Street. “This is the first time I came here,” said William Law-King, the boy’s cousin, as his voice broke with sadness. His cousin was killed for “no reason,” he said. “I don’t know,” he said when asked what his cousin was doing at the house frequented by drug addicts and dealers.

Davis was attending Youth Build to get his high school diploma, said his aunt. “He was a good kid. He wasn’t running around the streets, none of that. He just got caught up in the wrong situation in this damn house. Wrong place, wrong time. That’s what it was,” said Angela Holton, Davis’ aunt.

A dozen of Davis’ family members took part in the march, said the cousin. “They caught the murderer though,” said Holton. “It gives us a sense of comfort. Ceasefire did a hell of a job. It wasn’t even a month when they caught him.” Detectives arrested 23-year-old Jarvis Porter and charged him murder and attempted murder for shooting the two boys at the drug den which has since been boarded up by the city.

There was also a boy who knew three teenagers — Nazerah Bugg, Armoni Sexton, and Jaquell Johnson — killed in the streets.

“When Armoni died, it was a wake-up call for me because my mom kept telling me not to be out here,” said Tyreek Fulwood, 17, a student at the Paterson Charter School for Science and Technology. He stopped staying out late and avoids walking on certain streets.

Fulwood played basketball with Sexton. His mother, pastor Patrice Fulwood-McFadden, appeared glad at the changes her son made after three of his friends were killed.

The Ceasefire Unit within the Paterson Police Department investigates non-fatal shootings and has a remarkable solvability rate – three times better than that of Newark. Captain Patrick Murray, who heads the Ceasefire Unit, said the march has been going on for 10 years.

“It has made the community more aware of the violence in the city and it encourages the community and law enforcement to work together,” said Murray.

It encourages witnesses to shootings to come forward and speak to law enforcement to make their streets safer, said Allen Boyer, president of the Ceasefire community group.

“We’re praying for peace. We’re praying that gun violence will cease,” said Boyer. “When the community gets involved, that’s it, crime goes down.” He said he wants residents to report crime and freely speak to police officers attempting to build safer neighborhoods.

The Ceasefire community group was able to do much more when it received a small grant from the New Jersey Attorney General’s Office, said pastor John Algera of the Madison Avenue Christian Reformed Church.

Algera said the grant funds allowed the group to pay stipends to people to fan out into a particular neighborhood after a shooting to prevent retaliatory violence. He said outreach workers would visit shooting victims’ families to discourage retaliation. Funding for Operation CeaseFire New Jersey dried up years ago. Though the initiative has floundered elsewhere, it has had enormous success in Paterson, according to community leaders.

“It’s probably one of the most significant police-community partnerships I’ve seen,” said Algera. He has been a pastor in Paterson for 30 years. “We started Ceasefire before the police were on board so they got on board with a community movement. They really value the community’s involvement and they know they need the community.”

The Ceasefire community group was started in 2005 based on a model from Chicago, said Algera.

Algera, who has been with the Ceasefire community group since its inception, hopes the state or the city could provide the group with some grant funds to conduct outreach. He said the grant from the state was for $30,000.

The march that started at 10 a.m. and ended at 12 p.m. also attracted political leaders. Some were annoyed at the presence of a group of Phil Murphy backers who were clad in blue t-shirts supporting their candidate for governor.

Johnson specifically complained about mayor Jose “Joey” Torres. She looked few feet in front of her to find the mayor had joined the march as it proceeded to cross the Passaic River on West Broadway.

“He’s here now. I see our mayor,” said Johnson. She continued to complain about council members. Council members Andre Sayegh and Michael Jackson were part of the march. Ruby Cotton had her husband former councilman Ed Cotton march on her behalf.

Even though the march re-opens old wounds, it helps to heal suffering family members of shooting victims, said Winnie Harrison of the Ceasefire community group. “It’s something they have to deal with for the rest of their lives by losing a son, brother, mother, or father,” she said.

Harrison is the aunt of Curry. Her nephew was shot 11 times on Arch and North Main Streets in 2013 because he broke up a fight. He died a year later from the gunshot wounds, she said.