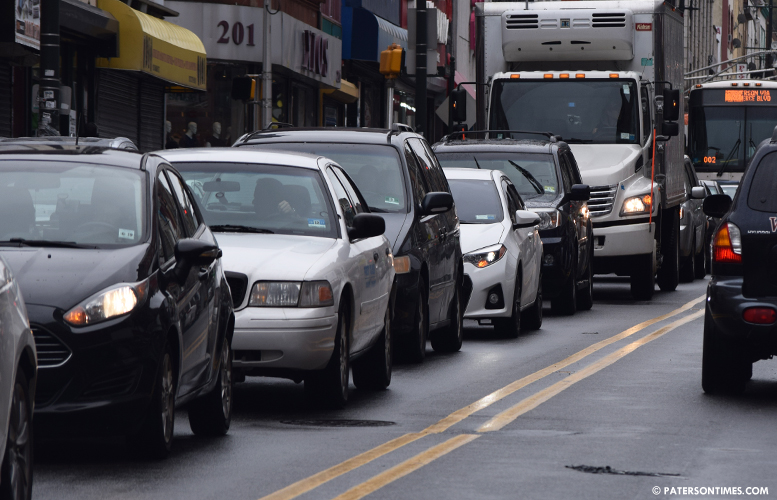 The city council is considering a proposal put forth by mayor Jose “Joey” Torres’ administration to stop vehicles from turning on red light at 20 busy intersections mostly within the downtown Paterson business district.

Councilwoman Maritza Davila, chairwoman of the public works committee, said a traffic study was conducted by city traffic engineer Hongchao Yu that resulted in the recommendations. She said the purpose of the measure is to reduce the number of pedestrians hit by vehicles in the downtown Paterson area.

“We don’t have New York style traffic here,” said Michael Jackson, 1st Ward councilman, who opposed the traffic changes. “The traffic is already out of control. I think it will cause more gridlock.”

Main Street in downtown Paterson is gridlocked throughout the day (Pictured: downtown Main Street traffic at 10:30 in the morning). It becomes especially worse during peak hours.

Picture shows right turn lane at the intersection of Memorial Drive and Broadway.

“Where’s the data? These decisions have a huge impact on the community,” said Jackson. He thought the no turn on red from Memorial Drive to Broadway poorly conceived given the separate lane for right turn that presently exists there.

Council members were not provided the traffic study that was conducted by the city engineer on Tuesday night.

Yu, the traffic engineer, could not immediately be reached for comments.

Council members Kenneth Morris and Alex Mendez wanted to know whether the traffic engineer considered the impact the changes in downtown Paterson traffic will have on adjoining areas of the city.

“They have a long-term impact,” said Morris of traffic pattern changes. The downtown area also suffers from ill-conceived one-ways that frustrates motorists and contribute to gridlock. Passaic County engineers pointed this out when the county conducted a circulation study of the downtown business area and the Great Falls Historic District in mid-2016.

Sheri Ferreira, executive director of the Downtown Paterson Special Improvement District, said she understands the need to create a more walkable downtown, but worried about gridlock. She said she would have to see the traffic study to determine what kind of impact the changes will have on downtown businesses.

The council was expected to vote on the proposal on Tuesday night, but postponed consideration pending receipt of the traffic study.

Other roadways impacted by the proposal are: