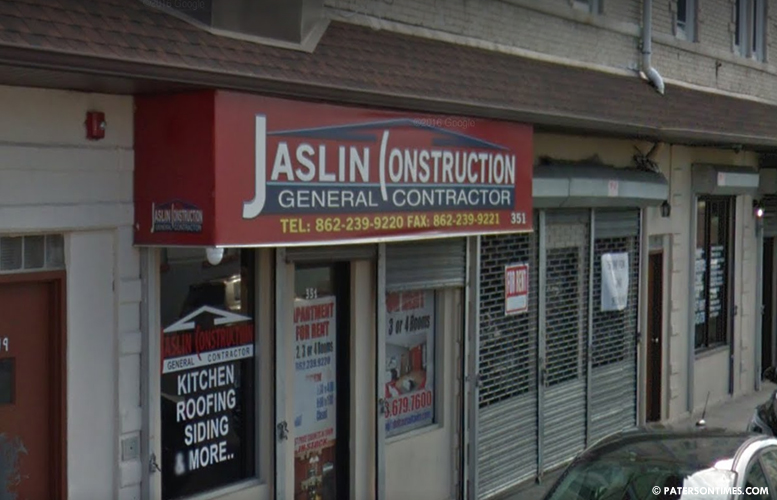 Four weeks after his employees crashed a City Council meeting in support of mayor Jose “Joey” Torres against a no confidence vote, Jesus Izaguirre, owner of Jaslin Construction, wanted a return on his investment for helping the mayor.

Hours after a city inspector issued a violation to his company for alleged illegal construction work at a Market Street property, Izaguirre secured an audience with the mayor on Tuesday to get the violation withdrawn. Over the past almost three years residents have complained about the difficulty of securing a meeting with the mayor. Often, it takes weeks before a resident is able to meet with him to air their concerns.

When contacted for a response, Torres’ office referred the request to construction official Jerry Lobozzo. The firm was issued a violation on Tuesday for work it was doing at 335 Market Street, said Lobozzo.

Izaguirre obtained a building permit from the city to handle a small project with 12 sheets of sheet rock. Instead of the small project, he was doing a “full blown addition” to the structure, said Lobozzo.

“We issued him a $2,000 violation for misleading statements,” said Lobozzo. He said a stop-work order was issued to force the firm to halt construction at the location.

Izaguirre could not be reached for comment at his company’s listed phone number.

When initially contacted regarding the meeting between the mayor, officials, and Izaguirre, Lobozzo was reluctant to discuss the matter. “How do you know about that?” said Lobozzo when asked about the meeting that also included him. “I don’t know if I’m at liberty to talk about it.”

Lobozzo provided the details of the violation after receiving instructions from the mayor’s office. Izaguirre also lobbied councilman Luis Velez to assist him in voiding the violation that was issued against him.

Velez said he could not do anything that would break the law. He said he has been wrongly accused by some of having reported Izaguirre’s allegedly illegal construction work at the Market Street property.

“They were accusing me of something I did not do,” said Velez. He denied having reported the site. He noted he often refers complaints like loud music from constituents to various departments.

“This one came from one of our housing inspector,” said Lobozzo. He said he is not aware of any prior referrals. When asked if a council member reported the site to him, Lobozzo responded in the negative.

“If you feel it’s unfair or wrong you have the right to appeal it,” said Lobozzo.

Izaguirre has not been issued any zoning violations; however, Lobozzo said those violations are forthcoming. Izaguirre has to submit an application for the building project to planning and zoning, he said.

“We’re not fine driven. We’re interested in compliance,” said Lobozzo. Economic development director Ruben Gomez said the penalty issued to the construction company can be waived once it submits the needed paperwork and is in compliance. Asked how common it is to waive penalties for firms like Jaslin Construction, which has been cited by the Community Improvement Division in the past, Gomez said, “little more common than we’d like.”

City activist Ernest Rucker, a critic of the mayor, who pushed the no confidence against the mayor in the council, slammed the mayor for having a private meeting with the company about the violation.

“It’s quite interesting that Jaslin Construction and his workers come down to support the mayor and now he’s able to get private meetings to discuss tickets he got for not complying,” said Rucker.