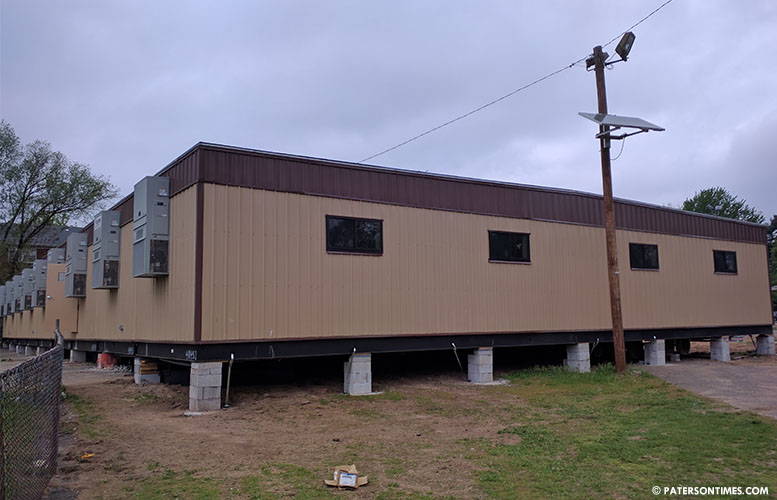 The construction of a million-dollar prefabricated recreation facility at Buckley Park is being criticized by residents and councilman Michael Jackson as a waste of money and a poor fit for the neighborhood.

Jackson has described the facility being assembled at the park in the corner of Redwood and Chamberlain Avenues as a “trailer park” and an “eyesore” in the neighborhood.

“That’s the worst thing we could have done,” said Jackson, who represents the 1st Ward where the park is located. He has been critical of mayor Jose “Joey” Torres’ administration’s proposal to spend $1 million in federal Community Development Block Grant (CDBG) money for the facility.

“That’s not a recreation center,” said Jackson. The ceiling of the trailer will not allow for indoor basketball, he said. Whomever made the decision to build this facility should never be allowed to make future decisions, he said.

“He voted against it,” said Torres when asked for a response to criticism on Monday morning. Jackson, who was the sole vote against the facility on the council, isn’t alone in criticizing the facility that’s being built.

“It’s disgusting looking. It doesn’t look good,” said Teresa Schultz, a resident of Brooksloate section. She at first thought the trailer was serving as storage space for the construction workers’ tools, she said.

“This is ridiculous. It’s not worth the money,” said Linda Delinda, who lives blocks away from the park on Preakness Avenue. She said she visits the park every morning and did not feel the facility an appropriate addition.

“It’s small inside. It may be good for shooting pool, I don’t know,” said Shawn Delinda, her son, who was at the park. He complained about the removal of the basketball court. His 11-year-old son would play at the basketball court during the weekend, he said.

“Now since it’s not here, where am I going to bring him?” asked Delinda. Jackson said he has received complaints from residents about the removal of the basketball court at the park. Torres has said the facility will be assembled at the site of where the basketball court is located.

“We eliminated a basketball court. I’ve gotten nothing but calls from my constituents, parents who brought their kids to that playground,” said Jackson. “We gained an indoor prison facility.”

There’s also concern the facility will cause a spike in crime at the park due to reduction in visibility at the park. Schultz said the facility currently sitting on top of cinder blocks behind the Police Athletics League (PAL) building and in front of the field area will allow wrongdoer to commit crime behind the trailer.

Agostino Feola, Sr., director of the Paterson Police Athletics League, steered clear of the political controversy surrounding the facility. “We in Paterson, we need facilities. At least you have a place to go into,” he said. “Kids can use it. We need to do more for our kids.”

Jackson said the council deserves some blame for approving the contract to build the facility. “I just about begged the council to please don’t support this, but I got none of them to support me,” he said.

Council president William McKoy defended the council asserting the administration proposed the plan which was supported by recreation coordinator Benjie Wimberly. When asked if the council made a mistake in approving the contract for the facility, McKoy said, “The funds would have been lost otherwise. Is it a typical recreation center? It appears not.”

Wimberly could not immediately be reached for comments on Monday morning.

Jackson said it would have been better to return the funds than to have a recreation trailer. “That’s a million dollar we flushed down the toilet,” he said. He called it a “rash” decision to build the pre-fab facility.

The city should halt assembling the facility, said Jackson. “I think that trailer needs to be removed,” said Jackson. He suggested giving the trailer to one of the city’s overcrowded schools to use as temporary classroom space.

The facility being assembled will both scar the park and the neighborhood, said residents.