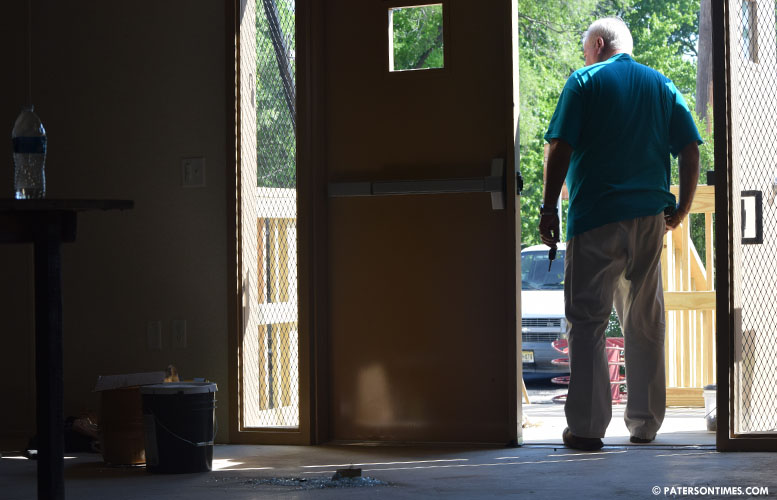 The million-dollar prefabricated recreation facility and a van belonging to the Paterson Police Athletic League (PAL) were vandalized at Buckley Park on Wednesday night.

Neither the park nor the PAL facility inside it have cameras.

The van’s driver side window was completely destroyed; the two doors of the pre-fab structure was badly dented and the small looking window on one of the doors was broken.

“25 years. I have not seen anything like this,” said Feola. “I’m really disgusted. I’m upset this has happened. This is not the work of a kid.”

Feola suspects the vandalism was carried out by one or more adults between 9 p.m. last night and 8:30 a.m. this morning (he was on site at 9 p.m.). He said neighborhood kids would not vandalize a van belonging to the PAL or a structure that’s going up to provide them a safe haven.

Glass shards on the floor from the broken looking window at the door of the structure.

“This is a message because of this building,” said Feola. He said the perpetrator is making a statement by targeting the pre-fab building that has stoked controversy in the city. He said nothing was taken from the van.

Even the boxes of clothing the PAL collected to donate to the city’s poor remained next to the van on the ground untouched, he said.

“Wow. This is news to me,” said Michael Jackson, 1st Ward councilman, when told of the vandalism on Thursday morning. When asked if the heated rhetoric over the controversial facility described as a recreation trailer played a role, he replied: “I don’t know if any of the rhetoric led to the vandalism. I can tell you what speaks directly to the vandalism. If you’re not providing an outlet for young people then mischief is right around the corner.”

Jackson has been critical of the pre-fab structure even before it was revealed as a series of trailers. He has lambasted mayor Jose “Joey” Torres’ administration accusing it of wasting money on the structure.

Council president William McKoy who called the administration’s move “bait and switch” said he doesn’t feel the controversy led to the vandalism.

“There’s never an excuse for anyone to damage other people’s property that’s not something we support,” said McKoy. “I don’t see a connection,” he said when asked if the debate in the city may have contributed to the vandalism.

Both McKoy and Jackson were surprised at the news of the vandalism at the park located in the Brooksloate neighborhood. McKoy was particularly disturbed at the damage to the PAL van. The council president said it is well-known throughout the city the good work the organization does for the city’s young people.

“The PAL is a great organization that’s taking young people and molding them and providing them with support and structure. They have our full 100-percent support,” said the council president.

In this case, the PAL appears to have been caught up in the situation involving the recreation facility controversy.

Feola reckons it will cost $300-400 to replace the van window. “Where am I going to get that money to pay for this window?” he asked.

Alex Cruz, president of the Police Benevolent Association (PBA), has told the PAL director the union will replace the broken window.