School 26 in Paterson gets a new playground | Paterson Times 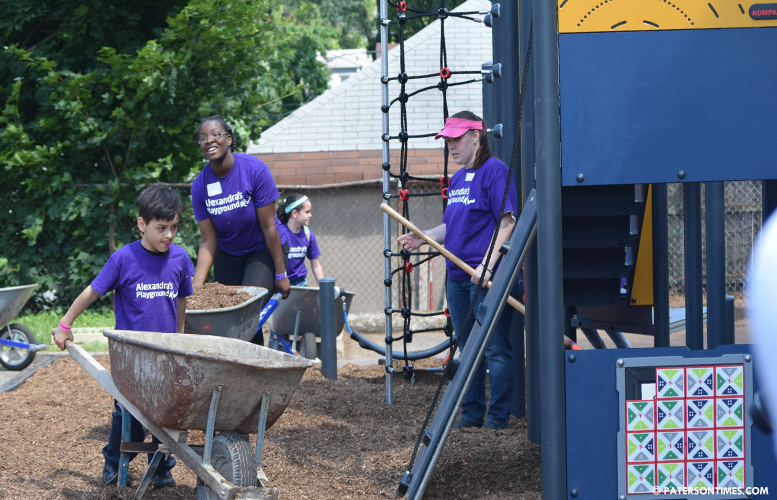 Dwight State walked from his house in the Riverview section to the 10th Avenue neighborhood to build a new playground at School 26. He was among more than 100 volunteers who spent their Saturday transforming the asphalt lot at the elementary school to a modern playground.

“I think this playground will help keep a lot of kids out of trouble,” said State, who walked from North 3rd Street to East 32nd Street to work on the playground. “It will give them something to do instead of running around the streets and almost getting hit by a car. They can come over here and play in the playground.”

The playground will support a variety of activities for youngsters including climbing, sliding, and spinning on a supernova. 10-year-old Sharon Melendez, a 5th grader, who attends School 26, said she and her friends plan to use the playground during off-school hours.

“Most kids are running around because they don’t have a place to go to. Sometimes they’ll go to the park, but it’s further away. Now, that it’s at the school they won’t have to go far,” said Melendez.

“Active healthy play is really critical to kids’ development and socialization. And unfortunately, kids have fewer and fewer places to play these days,” said Vitale. His organization funded the playground which cost $60,000, he said. The Paterson Public Schools contributed $11,000 for site prep, according to the nonprofit.

This is the 3rd playground his organization built in Paterson, said Lori Hrbek, executive director of Alexandra’s Playground. The playgrounds at School 29 and School 27 were built by the organization. She said this is the 22nd playground the nonprofit built throughout the country and the world.

“We’ve done playground as far away as Afghanistan,” said Vitale. His organization is named after his daughter Alexandra whose life was tragically cut short in an accident at a sailing school in 2008. Her life is celebrated through playgrounds that provide opportunities for safe and active play for children.

The school and the broader local community welcomed the playground. Majority of the volunteers were from the city. Volunteers also came from the New Jersey Community Development Corporation (NJCDC) which worked as a partner in the playground project.

“We’re so fortunate to have this. It was completely blacktop out here,” said Courtney Glover, principal of School 26. “Monday morning we’ll have to fight to get our children off this playground.” She was particularly taken with the separate planters and benches with planters which will allow for a garden at the school. Kitchings and Melendez want to grow roses and sunflowers at the planters.

Bob Guarasci, president of New Jersey Community Development Corporation, said students can select the types of plant they would like to see planted. His organization will assist the school in planting, he said. This is the 8th playground Guarasci’s group helped to build at city schools.

School board vice-president Chrystal Cleaves said there’s a scarcity of playground in the eastern part of the city. “If we can try to get this in every school that would be wonderful,” she said.

“It’s at a great location,” said councilman William McKoy, who represents the 3rd Ward where the playground is located, citing the one-way street with little traffic in front of the new playground. “There’s a lot of children both in the neighborhood and in the schools that will make good use of this.”

McKoy tested the durability of one of the sliders by conducting a test run. With both School 26 and School 1 situated in the same area, the playground sits in an optimal location for school children to use.

There’s a fourth playground planned by Alexandra’s Playground for School 28 and Napier Academy – both of those schools are situated in the same area, said Hrbek. “That will happen in the fall,” she said.

School 28 and Napier Academy are located in State’s neighborhood. State said he would like to volunteer to build more safe play spaces for children. When asked, why did he walk from one side of the city to the other to participate in a playground building, he replied, “I told my friend I’d show up. And I had to show up.” 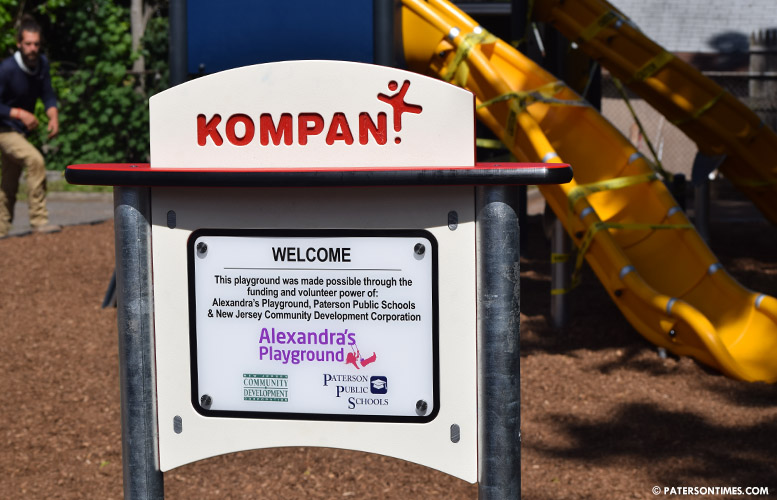 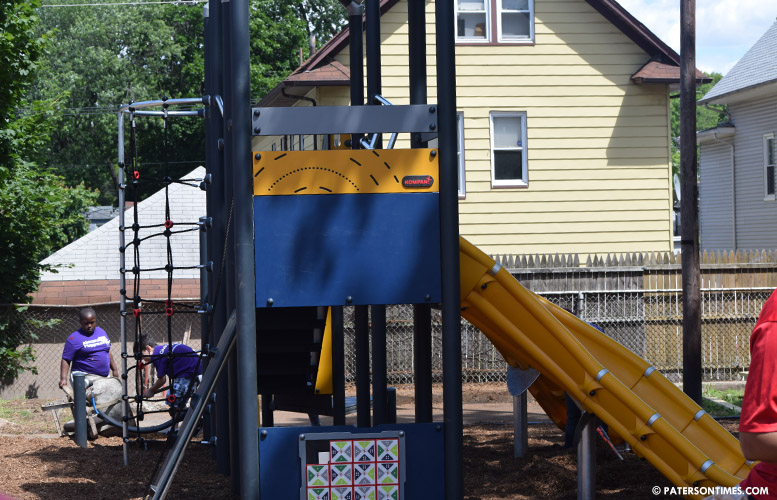 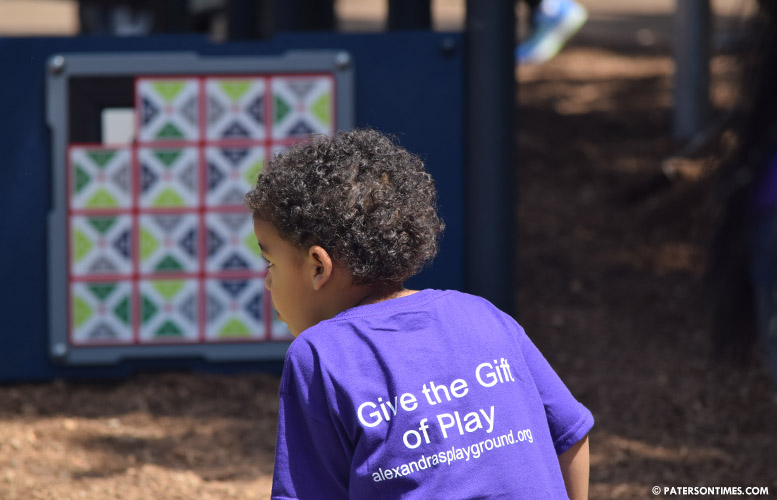 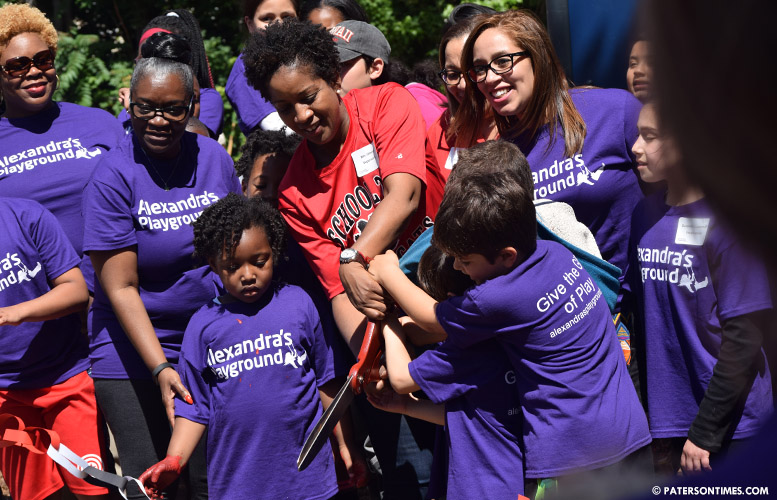 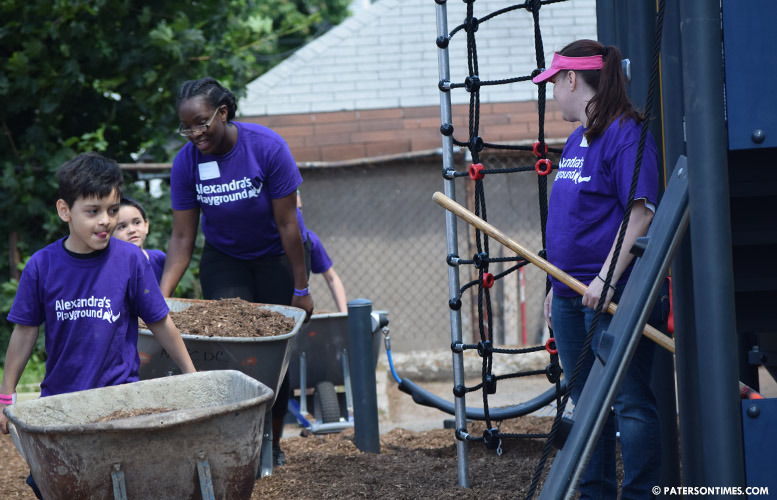 Correction (June 6th, 2017): A previous version of this report erroneously stated the district contributed $1,100 when in fact it contributed $11,000 for site prep.