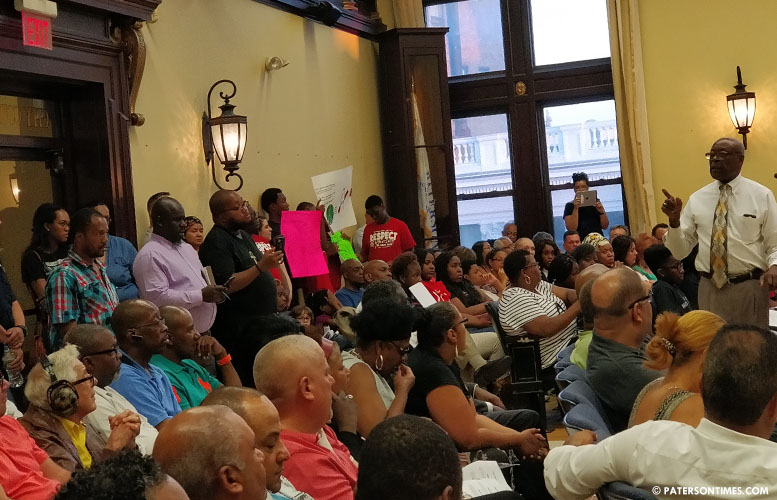 Council members heard from supporters and opponents of the new measure before the vote. Community leaders and residents widely supported the measure arguing it will reduce crime and disturbances in neighborhoods while a small group of liquor establishment owners vehemently opposed it contending the ordinance will put stores out of business.

“This is a low blow to business owners. We’re going to have to close down,” said Quilvio Montesino, who owns two liquor establishments. “This ordinance is going to have a domino effect on a lot of businesses.”

Montesino said the ordinance will wipe out businesses in the business curfew areas. In curfew areas businesses of all types are forced to close at midnight. He said liquor store owners “went through hell” to secure approvals and licenses to run their shops.

“The safety of our people is more important than profit,” said Kenneth Clayton, pastor of the St. Luke Baptist Church. He is also the president of the Paterson NAACP.

Clayton was among a diverse group of religious leaders to express their support for closing down liquor stores at 10 p.m.

“We know even closing businesses at hotspots has been a tremendous help,” added John Alger, pastor of the Madison Avenue Christian Reformed Church. He said the area of East 25th Street off 10th Avenue has benefited from peace and quiet that came about as a result of the business curfew ordinance passed in 2014.

Alger said closing liquor stores at 10 p.m. will deter people from surrounding communities from coming into Paterson late at night for alcohol.

“There’s got to be a change. I’m tired of coming out of my house and seeing that liquor store open,” said imam Al-Hajj Ibrahim Hanif of the Masjid Salahuddin speaking of a liquor store on Broadway.

“If somebody wants liquor they can buy it before 10 p.m.,” said city resident Sabrina Nealy. She said liquor stores allow late night gathering that often result in fights disturbances. Another city resident Stewart Stimson said gatherings outside of a liquor store at 89 Market Street forces him to cross the street walking home following a day of work for fear of violence.

The most moving testimony came from young people which likely resulted in the unanimous vote.

Shamya Winstead, 17, a student at Eastside High School, was outside when a fatal shooting took place at the Moya liquor store on 10th Avenue. “I was right there. I had just come out of the store,” she said. “It took for that shooting to happen for it to close down,” she told the council. “A life should not have to be given for action to be put in place.”

Winstead said there’s another liquor store on 10th Avenue that is a magnet for loiterers. There were similar testimonies shared by young people.

Raheem Smallwood of the Municipal Alliance Prevention Program, who brought the young people to the meeting, said school age children who live close to liquor stores cannot sleep at night due the disturbances.

1 in 4 Paterson youth drank alcohol in the past 30 days, according to a study conducted by the Paterson Coalition Against Substance Abuse (P-CASA). “Kids in our city are accessing drugs and alcohol at a high rate,” David Lardier, data specialist with the group, told council members last week. He blames easy access.

The coalition’s data forced mayor Jose “Joey” Torres’ administration and the council to put forth the measure.

There’s also the cost associated with having liquor stores open after 10.m. Paterson has 197 liquor establishments. Many of these establishments are magnets for crime. For example, there were 512 calls for service to the Paterson Police Department for liquor store issues after 10 p.m. from Dec. 2016 through January 2017, according to the group.

The measure will not require the stores to close at 10 p.m.; however, it is presumed that liquor stores will close because they will not be able to sell any alcoholic beverages after 10 p.m.

“If it doesn’t require them to close at 10 p.m. the ordinance is a waste of time,” said Kenneth Morris, councilman at-large. He pointed out the ordinances in Newark and Jersey City are specific in stating stores must close.

“Don’t be flim-flammed and bamboozled. This is a political trump to score points,” added William McKoy, 3rd Ward councilman. Torres, who has been charged with theft and other corruption offenses, is attempting to make himself relevant by pushing for action on popular issues, according to political observers.

The indicted mayor is running for re-election less than a year from now. His administration is challenging the state’s first-class city statute that allows municipalities with population of over 150,000 people to regulate the different liquor licenses and set closing hours.

Newark and Jersey City have ordinances that force liquor stores to close at 10 p.m. Both are cities of the first-class. In other words, Paterson has no authority to set closing hours for distribution or “D” licenses.

“We do anticipate a strong challenge,” said law director Domenick Stampone. He is confident a court challenge will result in a victory for the city.

“This will be a start,” said council president Ruby Cotton. She said liquor stores closed at 10 p.m. prior to the 1981. She said this was changed to allow liquor stores to remain open beyond 10 p.m.

“Almost 30 years later, now you see the impact it has had on our community,” said Cotton.

“This legislation is long overdue. I want to adjust the attitude that Paterson is a city where anything goes. Tonight, we’re sending a strong message that is not going to happen in Paterson,” added Andre Sayegh, 6th Ward councilman, sponsor of the measure.

Sayegh said the city defeated a challenge from liquor stores on business curfew and will do the same with this measure.

Final vote on the ordinance is scheduled for July 25th, 2017.