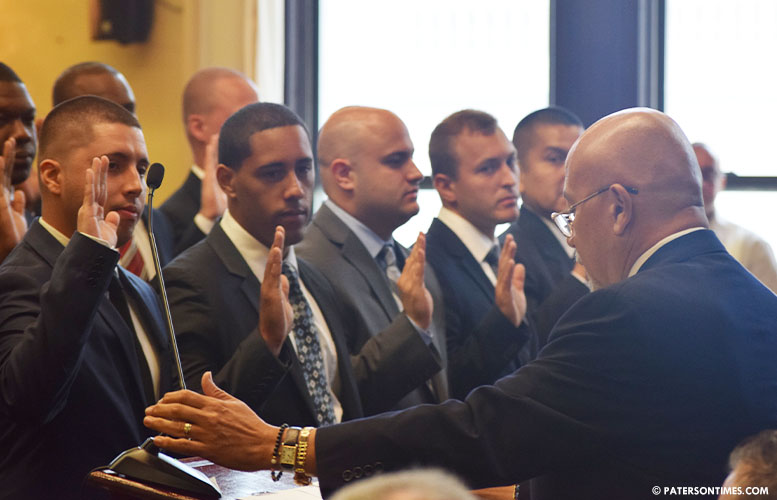 Mayor Jose “Joey” Torres swore in 29 new officers on Monday morning boosting the number of police officers in the city to well-above 400 for the first time in a while. After six months of police academy, the newly minted officers will be deployed on patrol of city streets, said police director Jerry Speziale.

“As mayor, the one constant that remains true, wherever I’m speaking with constituents, is the request and need for more police officers,” said Torres. He promised to hire 25 new officers every year when campaigning for mayor three years ago.

Torres has kept that promise. So far, in his third nonconsecutive term, Torres has hired 73 officers, he said. For the first three years, the mayor played catch-up replacing retiring and departing officers.

Half of the officers were hired using more than $2 million in federal grant funds secured by Rep. Bill Pascrell.

“We could use another 100 police officers. We need people who care to be in your kinds of positions. You’re not just here to get criminals. You’re here to make everybody to feel safe,” said Pascrell. “Crime statistics go up and down – they are like political polls. They don’t mean much in the final analysis. What really means something is whether people feel safe. Whether they feel safe in their homes and whether they feel safe walking the streets. We got to make these streets safer.”

“Try to build positive relationships with the community you serve,” said deputy police chief Ibrahim “Mike” Baycora. He invoked the golden rule to urge the new officers to treat residents the way they’d like to be treated.

“You can’t be biased,” council president Ruby Cotton told the new recruits.  She told the officers to be even handed and fair to the disparate ethnic communities that call the Silk City home. “We look to you to protect us,” she said.

Alex Cruz, president of PBA Local 1, the police union, urged the officers to act with integrity. The recruits are all ostensibly Paterson residents or at least were at the time of applying for police jobs.