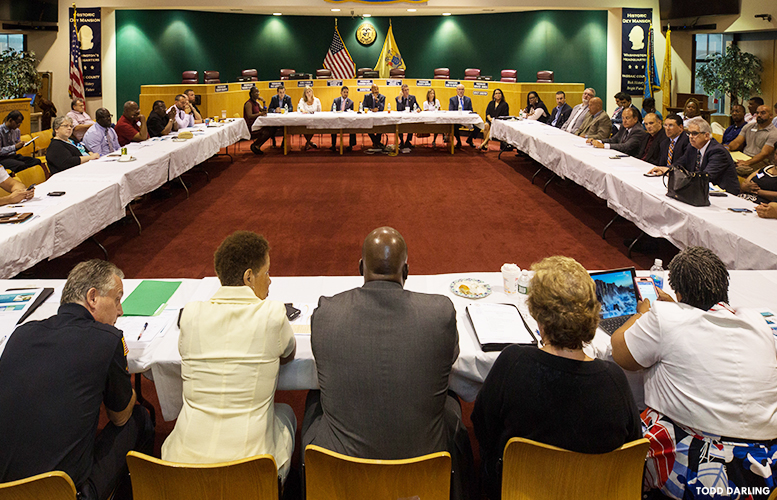 The pictures of drug addiction — a lifeless woman strewn on the grass at Barbour Park, a man using the steps of the Paterson public library as his bed, and a woman shooting heroin outside the fence of a local school – moving on a monitor screen brought home the monumental problem the new Passaic County Drug Policy Advisory Committee is tasked to resolve.

“It’s gotten to the point you could no longer turn a blind eye or ignore what is largely a national epidemic. It has reached an epidemic proportion. Paterson is ground zero here in the region,” said Passaic County freeholder Theodore “TJ” Best to a packed audience at the freeholder’s meeting room on Monday afternoon. “We all have a responsibility in addressing this.”

Best saw the wretched images of drug addicts published by photojournalist Roger Grier. The freeholder was “called out” to take steps to tackle the problem which forced him to form the committee. His panel brought together officials – among them 11 police chiefs and 4 mayors — from majority of the 16 municipalities that make up Passaic County.

There were also high-ranking officials from the Passaic County government, organizations at the frontline of the epidemic, and local community leaders. More than 60 people attended the introductory two-hour long meeting.

Some emphasized the need to take an approach that tackles the problem in both cities and suburbs.

“The suburbs are really in trouble with this stuff. The up county suburban stuff is horrifying,” said Passaic County superior court judge Rudolph Filko, who served on the drug court for five years.

“It has gotten really bad in the 4th Ward,” said council president Ruby Cotton, who represents the epicenter of the problem — 4th Ward – in Paterson. “We have the problem of them coming here looking for the $3 bag of heroin that’s on Godwin Avenue and Auburn Street.”

Cotton said more resources need to be deployed to get a grip on the problem. She invited committee members to join her in a tour of the city to see the problem first hand.

“Thousands of people that come here from outside the city of Paterson get their maintenance drug and walk around aimlessly until they can finally find a $2 bag of heroin after standing on the street panhandling,” said police director Jerry Speziale. “It’s a massive problem. It’s like trying to shovel your driveway after a blizzard with a teaspoon.”

60-percent of those admitted to treatment facilities in Passaic County in 2016 were from outside of the county, according to data presented at the meeting. 40-percent were Passaic County residents.

Many of those treatment facilities are in Paterson.

Karen Walker, director of the Paterson Counseling Center, the methadone clinic on Main Street, said half of her clients are Paterson residents. The other half are from elsewhere.

“These are not just addicts these are human beings,” added Jerome King, head of the Well of Hope, a needle access program. His organization has been taking a public beating for giving out needles to addicts who discard them on streets, school grounds, and parks.

King received some criticism from Grier and community improvement director David Gilmore on Monday afternoon. The criticism prompted him to change the access program into an exchange program which sees 700 to 800 new clients every year.

The committee meeting mostly focused on treating addicts. There was little discussion on the impact these addicts have on the Paterson neighborhoods they have invaded. Drug users often use the city’s abandoned houses as shelter. Some of these houses catch on fire causing millions of dollars in damages. There’s also the police and fire response that cost local taxpayers.

“Nobody’s talking about the impact to taxpayers,” said Gilmore. “People that work hard every day and try to protect their property.”

There were scant specific proposals presented at the meeting. Best said the plans will be developed through subcommittees — law enforcement, treatment, prevent, quality of life, funding resources — for which attendees signed up.

One specific proposal came from pastor John Givens, who is the head of Passaic County’s youth services. He suggested turning the Essex County Juvenile Detention Center into a captive treatment facility for young people.

“There’s not enough beds,” said Richard McAuliffe, chief of police in Hawthorne. He tried to get his brother in-law enrolled into a treatment facility.

Filko said the way to address the drug problem is to prevent young people from getting addicted in the first place. He appeared dismayed at the lack of participation from school districts – only Totowa and Paterson had representatives.

Best said the subcommittees will meet in September. A second committee meeting will be held in October to review subcommittee recommendations.

Grier, whose photographs resulted in the formation of the committee, was a little let down. He wanted some immediate actions to be taken on Broadway, a main thoroughfare overrun by drug addicts on both sides leading to downtown Paterson, and Van Houten Street, a street overtaken by prostitutes soliciting johns in broad daylight.

“I’m not a meeting person. I’m an action person. We have to say, ‘You’re not going to do this on Broadway,’” said Grier. “I’m happy that the conversation got started.”