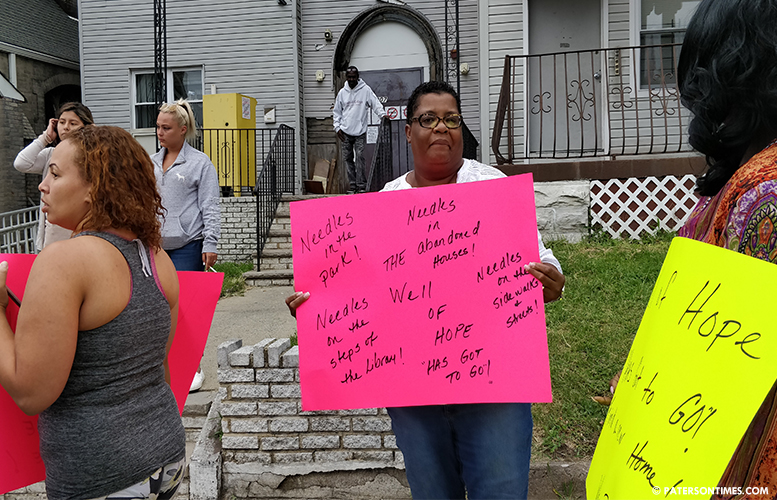 The discovery of blood covered needles on the steps of the historic Danforth Memorial Library on Broadway sparked a mini protest against the Well of Hope which operates a needle exchange program on Tuesday morning.

Half-dozen people held up signs decrying the program that has distributed 5 million needles since its inception in 2008. The program has a 40-percent return rate leaving the other 60-percent to be discarded by other means.

“It needs to be shut down. Their needles are all over the place,” said city resident Valerie Freeman. “This stuff is not allowed in other towns.”

Freeman and others held up signs that read, “Well of Hope your needles are everywhere!” and “Well of Hope has got to go!” Used needles have become ubiquitous in city parks, sidewalks, and abandoned houses, according to protesters.

Some of the protesters got into heated exchanges with employees of the Well of Hope. The organization runs the needle exchange, but also provides a haven for addicts to shower and grab breakfast in the morning.

“We’re trying to save lives,” said Roger Lester, program manager at the Well of Hope. He runs the organization’s minority aids initiative. He defended the needle exchange by citing the HIV outbreak in Indiana after now-vice president Mike Pence, who was governor of Indiana, made it illegal to possess a syringe without prescription.

Mayor Jose “Joey” Torres’ administration has supported the needle exchange program. His health and human services director Donna Nelson-Ivy defended it arguing it has kept the number of new HIV cases in the city down. 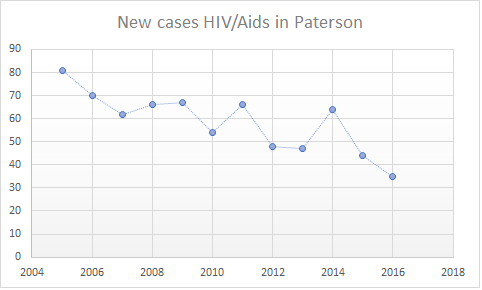 There are 4,442 reported case of HIV/Aids in Paterson, according to the New Jersey Department of Health. Nelson-Ivy has said the number of new cases have been kept down by the needle exchange.

“We’ll take our chances,” activist Victoria Oquendo told Lester when he claimed the program is preventing the spread of HIV/Aids.

The protesters are frustrated at the large number of needles that are found everywhere in the city, they said. Some have tried to urge the needle exchange to collect its needles from city parks and run the program as a true one-to-one exchange.

Jerome King, who runs the Well of Hope, has tried to placate opponents of the program. His organization will no longer freely distribute needles, but require addicts to return them in a true one-to-one exchange.

King’s move was received with skepticism. Council members criticized him for unloading large number of needles in the city.

Councilwoman Maritza Davila told him to take his program to Bergen County. His program provides services mostly to non-residents. Majority of his clients are residents of other towns, according to data King provided to the council.

“If we have to collect signatures to take them out of the city, we will do that. They have been very irresponsible,” said councilman Alex Mendez as he joined the protesters outside of the nondescript building that houses the needle exchange at 207 Broadway. “Our children cannot even use the parks. They cannot even go to the library because there’s needles all over the place.”

Mendez alleged King should have run the program as an exchange from the outset. He has asked the city’s law department to determine whether the program has been operating out of compliance all these years and if so whether the city can take actions against it.

Council members were surprised when King told them the Well of Hope was running an access program rather than an exchange.

“They are not helping the community. They are not serving our community,” said Mendez. He promised to shut down the needle exchange program if elected mayor.

“I will find a way,” said Mendez when asked how exactly he will shut down the private program. His promise to shut down the program if elected mayor effectively turned the exchange into a political issue in next year’s mayoral election.