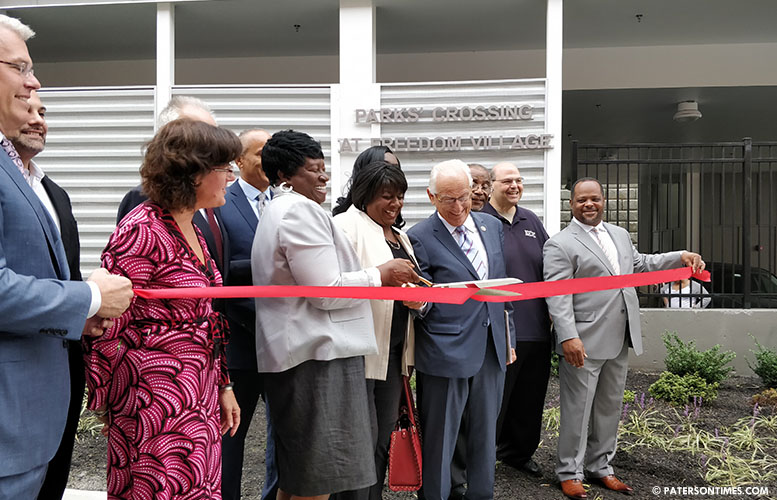 The city celebrated the completion of the second phase of the Freedom Village housing project in the 4th Ward on Monday morning. 63 units of senior housing opened on the site of the former Apollo Dye factory.

A rooftop deck, a fitness center, community rooms, and a laundromat are some of the amenities at the four-story Parks Crossing building on Harrison Street. There’s also a retail space at the building to allow for a grocery store or some other kind of a shop.

This is a remarkable transformation of a site that was occupied by a contaminated abandoned dye factory and served as a shooting gallery for drug addicts.

“It was deplorable. Terrible, terrible, terrible,” said mayor Jose “Joey” Torres. The new complex joins the 70-unit King’s Court at the Freedom Village on Straight Street between Governor and Harrison Streets which opened in 2015.

The cost for the Freedom Village development is $90 million, according to Irma Gorham, director of the Paterson Housing Authority. The colorful buildings grab the attention of motorists and pedestrians.

“With both buildings, when you pass by, you say, ‘Wow. What’s that,’” said Gorham. Both buildings will attain LEED certification for being eco-friendly. Apartments are equipped with energy saving appliances, central heating and cooling.

20 people have moved into the new complex, said Gorham. Among them are Patricia Johnson and Maybell Reams, both once lived at the soon-to-be demolished Riverside Terrace.

“Heaven,” replied Johnson when asked what’s it like to live at the new complex compared to the Riverside Terrace.

“It’s very quiet. People around here are friendly. I don’t have the problems I had around 5th Avenue,” said Reams.

Both moved in to the new complex three weeks ago.

Gorham said residents from the Riverside complex are moving to the new complex. Residents have to be 55 years of age or older to move into the senior housing complex. Some of the 300 people in the housing authority’s waiting list have avoided moving into the complex because of its location in the roughest part of Paterson.

The authority is taking applications to find tenants. Freedom Village is being managed by Philadelphia-based Pennrose which also manages the Heritage at the Alexander Hamilton. It took 12 months to build the four-story structure, said Harry Moody, senior developer with Pennrose Properties.

“This has been longtime coming,” said council president Ruby Cotton of the 4th Ward. “We need more senior housing.”

Rep. Bill Pascrell described the new complex as a “jewel” and urged residents to take good care of their dwellings.

“This is a good thing for our community,” said Pascrell, a former mayor of Paterson. “We got to make these situations not oases.”

Pascrell wants the development to be integrated into the existing neighborhood.