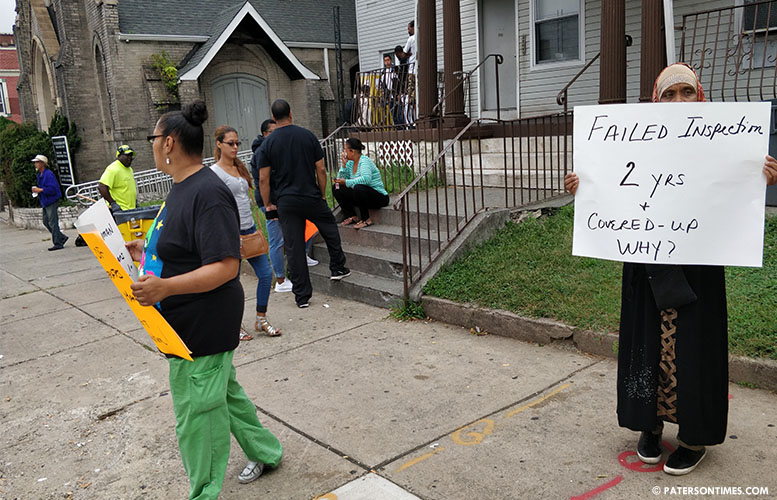 The men and women opposed to the city’s needle exchange program continued to protest outside of the Well of Hope on Monday morning. Half-dozen residents gathered outside of 207 Broadway to demand the closure of the troubled nonprofit organization that has been unloading millions of needles since 2008.

Their protest comes two days after Jerome King, director of the Well of Hope, said his group would no longer run its needle program. However, some of the protester did not buy into the announcement.

“I think it’s a smoke screen. All of the sudden they want to shut it down. I don’t trust the things people say. I got to see it,” said Valerie Freeman, a lifelong resident of Paterson. “They are open.”

Freeman cited the false promise King made in mid-August. He publicly announced his group would no longer hand out free needles, but operate as a one-to-one exchange program. A week later, his employees continued to hand out needles to anyone who wanted them without requiring clients to bring in dirty syringes.

Indeed, the Well of Hope was open on Monday morning. After protesters gathered with signs and miniature loud speakers in front of the building, employees from the organization put up signs: “SAP CLOSED.” The syringe access point closed signs were affixed to both the door and the drop-off container on the building’s porch.

King had said the program would close effective Monday. His organization continued to deliver other services like coffee to the drug addicts.

Community activist Victoria Oquendo described the organization as “indifferent” to the concern of neighborhood residents and “reckless.”

King did not respond to a call for comment on Monday morning.

The protesters and the addicts engaged in verbal scuffles on Monday morning leading the Well of Hope to call the police. A lone police officer arrived at the scene. One of the nonprofit’s employee told the officer the protesters were harassing his clients and he wanted the officer to break up the protest.

The police officer observed the scene and refused to disperse the protesters. “We have a right to peacefully protest,” said Freeman invoking the U.S. Constitution.

Oquendo began protesting against the organization and its program after finding needles on her door steps. She found more needles in parks and sidewalks. A former insurance fraud investigator, she traced the needles back to the Well of Hope.

“All roads led me straight to the Well of Hope,” said Oquendo. She unsuccessfully tried to get King to accept responsibility for the large number of needles in public places. King said the responsibility to collect the dirty needles falls on the community receiving criticism from city leaders, for the program serves addicts mostly from other towns. She later took the issue to the city council and enlisted other community leaders to fight the needle program.

Several possible mayoral candidates like councilmen Alex Mendez and Michael Jackson have come out against the needle program. Mendez promised to shut down the program if elected mayor.

Jackson isn’t waiting to be elected mayor. He is leading the charge to evict the Well of Hope from its 207 Broadway location. He said the New Shiloh Church, which owns the building, has filed in landlord-tenant court to evict the group for failure to pay rent.

The church’s move led to a reported outburst from King. “He went in there like a bully,” said Freeman of an intense exchange between King, the church, and community leaders on Friday. Jackson was called in to defuse the situation.

The group showed a negative $8,834 income in 2015, the most recent available tax return.

On Friday, it also emerged the Well of Hope had failed health inspections two years in a row. Its kitchen was ordered closed in 2016. King never submitted a corrective action plan to address the mold, cross contamination of food products, and other problems in the building receiving a second unsatisfactory inspection last year.

King blamed the landlord for the mold and building issues. The group was given 12 summonses on Friday.

Some of the protesters cited the failed inspections at Monday morning’s protest.

“Paterson has its problems already, we don’t need to be burdened with more,” said Bilal Hakeem of the Elombe Brath Power Coalition. Some of the protesters criticized health director Donna Nelson-Ivy for attempting to intervene in an inspection to protect King’s organization.

Text messages and emails between King and Nelson-Ivy shows the director attempted to shield the Well of Hope from health inspectors.

The ever-louder protest against the program prompted the New Jersey Department of Health to issue a $10,000 grant to the Hyacinth AIDS Foundation to conduct sweeps to clean up needles from public places on Sept. 1, 2017. This though did not quell the protest against the organization.

“They are not responsible with anything they are doing,” said Denise McIlwain, 55, a lifelong resident of Paterson.