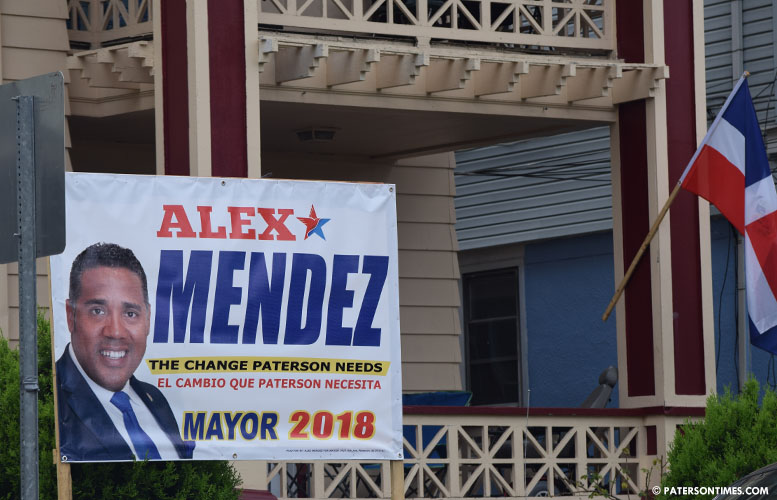 Councilman Alex Mendez has been campaigning hard for next year’s mayoral race. His large campaign signs dot houses on both sides of Park Avenue. This has led some of his detractors to cite an outdated and invalid municipal ordinance to allege the at-large councilman is breaking local law.

This old ordinance is no longer valid, but that hasn’t stopped Mendez’s opponents from using it to levy attacks against the 2018 mayoral hopeful.

“Can I put up a sign,” asked Luis Velez, 5th Ward councilman to the city’s head lawyer Domenick Stampone, “8 months, 9 months before the election?”

“The ordinance was challenged in court. You can put up anyone’s sign on your own private property because it’s free speech,” said Kenneth Morris, councilman at-large. “Other communities practice what I call neighborly behavior. So they take down signs when they are supposed to be taken down and they put them up when they are supposed to be put up. These signs can become visual litter; they don’t want that litter in their community.”

There was a case out of Hawthorne that went up to the New Jersey Supreme Court, said the attorney. A resident left a primary election candidate’s sign on his property beyond the time frame allowed by the town’s ordinance. He was ticketed; he challenged the ticket, and won because the sign was on private property.

There was also a U.S. Supreme Court case that dealt with a similar case.

“Why isn’t it updated in the system?” asked Velez referring to the municipal code that’s online. He said had the city’s code been up-to-date the debate could have been avoided. City officials said the law code will be updated.

“You just have to continue looking at Alex Mendez’ signs,” said Morris, jokingly, to Velez.

“I know why they are doing that. They are working on behalf of other candidates. I know the law very well. You can put any sign you want on private property,” said Mendez describing the individuals levying attacks against him citing a faulty ordinance on social media and other venues.

Mendez said his campaign has not put signs on public property. His campaign is also not wrapping campaign literature on poles as other candidates have done, he said.

“All my signs are always on private property. Those homeowners want those signs. When I went to remove it, they said, ‘No, I want that sign.’”

Mendez said the signs put up on Park Avenue this month has encouraged other homeowners to request his signs. After an election, his team usually fans out across the city to collect the campaign signs, he said.

“Right after the election, I go around the city and make sure all the signs are picked up,” said Mendez.