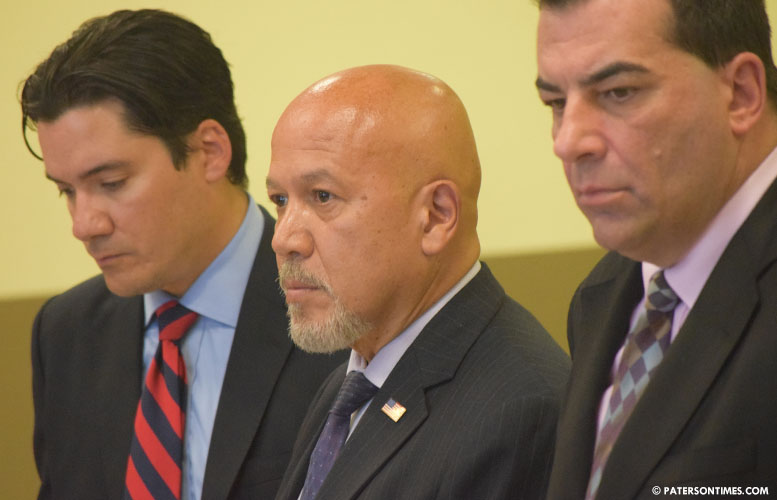 Mayor Jose “Joey” Torres pleaded guilty to corruption charges on Friday afternoon. As part of the five-page plea agreement, Torres will step down and serve five years without parole in state prison. He will be barred from public office and employment in the future.

Torres accepted the plea agreement just two hours prior to the Friday evening hearing at the Hudson County Superior Court. He was pacing back and forth in the hallway as his two attorneys were negotiating with prosecutors.

Torres and his three co-defendants – Joseph Mania of Randolph; Imad Mowaswes of Clifton; Timothy Hanlon of Woodland Park — will have to pay $10,000 in restitution to the city. All three of the public works supervisors pleaded guilty to identical plea agreements, according to Joseph Afflitto, attorney for Mowaswes.

Torres will have to pay an additional $800 in restitution. Authorities will not pursue other criminal charges against the mayor for misusing political campaign funds, prosecutors said.

“I regretted the actions I took,” said Torres on the steps of the courthouse. “I’m sorry. I’m sorry.”

Remain in mayor’s seat until Monday

One of Torres’ lawyers, Richard Solano, Jr., asked the judge to allow the mayor until Monday to forfeit his office.

“This is not a small town,” said Solano. “There will be a vacuum and void in the City of Paterson if there was an emergency,” said Solano. He said Torres also needs to ensure there is a “smooth transition” of power to council president Ruby Cotton.

Cotton will fill in as mayor. The council will have 30 days to select an interim mayor until elections are held.

“We have a convicted criminal who is going to be allowed to remain in power in the city of Paterson and exercise those powers for the next few days. We cannot know what he may do with that power even within that 48 hours” said Manis.

Venable said she will make a decision on Monday morning which leaves Torres as mayor for Saturday and Sunday.

“There is no question there will be forfeiture,” remarked the judge. She was shuffling cases on Friday afternoon severely delaying the Torres corruption case. For example, the case was scheduled for 1:30 p.m. After 2 p.m., the judge had all parties in her chambers. Torres’ attorney John Azzarello told the judge the case was close to conclusion and that there were some things that had to be “ironed out.”

As lawyers from both sides met in conference rooms and negotiated the judge was presiding over a trial. After 5 p.m. the case was heard by the judge.

The mayor and three public works supervisors were indicted by a grand jury in early March for using public resources to renovate a warehouse on East 15th Street leased by the mayor’s daughter Clarissa Torres and nephew Manuel Torres.

The niece and nephew formed a company called “Quality Beer” which leased 82 East 15th Street in an effort to open a beer distribution facility. The company could not secure the needed state permits to open the facility.

Mania, Mowaswes, and Hanlon at the behest of Torres supervised other employees to renovate the warehouse, according to authorities. The three supervisors allegedly billed taxpayers overtime while working on the mayor’s private projects.

Since fiscal year 2014 and up to their suspension, the three men collect almost half-million in overtime pay, according to government records.

Developer Charles Florio, who was involved in a permit dispute with Torres’ administration, hired a private investigator who captured video footage of the supervisors working at the warehouse. The private investigator, Harry Melber, also captured workers handling private jobs at the mayor’s Arlington Avenue home.

New Jersey attorney general Christopher Porrino has said the indictment unsealed on March 7th, 2017 does not cover the alleged work public works employees completed at the mayor’s Arlington Avenue home. Melber’s footage aired on NBC New York which ultimately resulted in the indictment of the three supervisors and their boss.

The three supervisors were placed on unpaid suspension while the mayor continued to collect his $119,000 salary.

Vote of no confidence

After the indictment was handed up by the grand jury, the city council unsuccessfully attempted to pass a no confidence measure demanding the mayor’s resignation. Several dozen Torres supporters protested the measure.

The council does not have a mechanism to oust the mayor; the resolution urged the mayor to hand in his resignation letter and focus on his legal defense.

Torres was elected mayor in 2002 when another mayor Martin G. Barnes was charged with corruption. Barnes received a three-year prison sentence. Torres appeared to have learned little from Barnes’ downfall.

Torres and one-time political ally McKoy proposed to honor the disgraced former mayor in February 2016 by installing a stained-glass window of his image in the historic City Hall. Coincidentally, the placeholder for that memorial on the stairway up to the second floor has Barnes on one window and Torres on the other.

Torres was re-elected in 2006, but lost to Jeffery Jones in 2010. Jones’ administration of city government was so poor that he finished fourth place in 2014. Torres won a third term.

“I would like to take this opportunity to express my most sincere apologies to the citizens of the great City of Paterson, for the serious offense I have committed. I take full responsibility for them, my actions and lack of judgement,” said Torres in a statement on Friday night.

Torres for months claimed he was innocent and that his innocence would be proven in court.

“Today, Mayor Joey Torres retracted his vigorous denials and promises of vindication and admitted to engaging in the old school corruption we charged him with earlier this year. With this plea, Torres forfeits his position as mayor of New Jersey’s third-largest city, will never again be in a position to abuse the public’s trust, and will go to prison,” said attorney general Christopher Porrino on Friday evening. “Our message is that this type of arrogant abuse of power and public resources will not be tolerated in New Jersey.”