Florio: Torres got what he deserved | Paterson Times 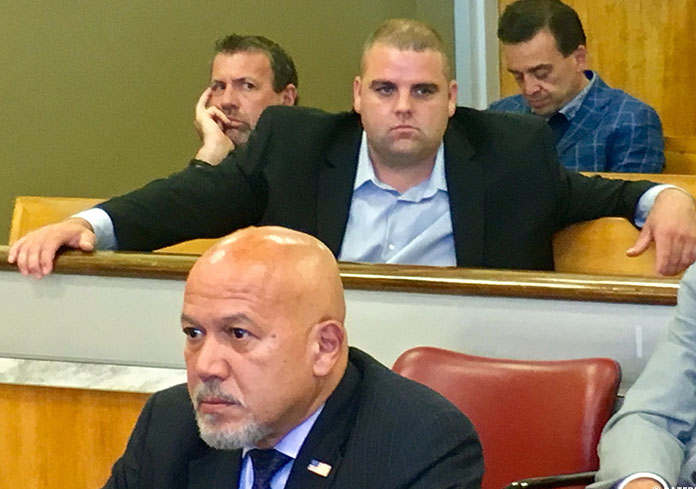 Mayor Jose “Joey” Torres received his just deserts on Friday evening for taking advantage of taxpayers, said Charles Florio, developer who can be credited for the three-term mayor’s downfall.

“He deserved it. This is what was caught. Think about all the stuff he was probably doing and didn’t get caught,” said Florio on Saturday morning. Torres has taken a guilty plea that requires him to step down, pay restitution, and serve fire years in prison.

Florio hired private investigator Harry Melber to follow the mayor around. From July 2014 and April 2015, Torres had public works supervisors — Joseph Mania, 51, of Randolph; Imad Mowaswes, 53, of Clifton; Timothy Hanlon, 31, of Woodland Park – perform renovation work at the warehouse at, 82 East 15th Street in Paterson, which was leased by his daughter Clarissa Torres and nephew Manuel Torres.

The Torres family wanted to open a beer distribution facility at the location. They failed to secure the needed permits and license from the state and ended up terminating the lease.

Melber captured public works employees working at the facility while in uniform and using municipal trucks. The footage aired on NBC New York and ultimately resulted in the indictment of the three public works supervisors and the mayor.

When asked if he thought he performed a public service by putting away a corrupt mayor, Florio replied, “Absolutely.” Indeed, without the developer, Torres would remain in power. He continues to hold the mayor’s seat; a judge will rule when Torres will forfeit his office on Monday morning.

Torres led people to believe he was innocent and that he would be proven innocent in court. He used this line to raise money for his legal defense fund. After the court proceeding on Friday, Torres issued an apology.

“I would like to take this opportunity to express my most sincere apologies to the citizens of the great City of Paterson, for the serious offense I have committed. I take full responsibility for them, my actions and lack of judgement.”

“He’s not sorry. He’s sorry that he got caught,” said Florio. He said Torres had municipal employees singling out and targeting certain individuals. Torres eventually targeted the wrong person.

Torres’ seat will be filled temporarily by council president Ruby Cotton until the council selects an interim mayor. Council members reacted to the news of the mayor’s guilty plea on Friday evening and on Saturday morning.

“I pray that his family gets through it,” said Kenneth Morris, councilman at-large, one of the longest serving members on the council, on Friday evening.

“This is a sad chapter in our city’s history but we must turn the page and focus on Paterson’s future progress,” said Andre Sayegh, 6th Ward councilman, a bitter rival of the mayor’s.

“I think justice was served for the taxpayers of Paterson,” said Luis Velez, 5th Ward councilman, on Saturday morning.

“It’s another black eye for the city,” said Michael Jackson, 1st Ward councilman. “I’m happy it has finally come to a close.”

Torres was a towering figure in the city’s political landscape. A Puerto Rican, Torres made history when he became mayor in 2002 — the first Hispanic mayor of Paterson. He succeeded Martin G. Barnes who was convicted for taking bribes.

“This is a very difficult time for the city. I pray for his family and I pray for him,” said Alex Mendez, councilman at-large. Torres family benefited from his corruption, said prosecutors during the court hearing.

The council can call for an emergency meeting to select an interim mayor to fill the seat once it is vacated, said Morris. He was thinking ahead of many of his colleagues and had the city’s attorneys prepare a resolution to appoint an interim mayor.

Morris said the resolution does not have a name. His colleagues will have to figure out who to make interim mayor. He hopes council members will pick someone with considerable experience and municipal know-how.

When asked if he was interested in serving as interim mayor, Morris replied in the negative. He is the second most experienced member of the council after William McKoy of 3rd Ward.

Velez and Jackson expressed interest in becoming interim mayor. Velez said if his colleagues cannot settle on a name and there’s a fight he would be willing to serve as interim mayor.

Jackson, who announced his run for mayor earlier in the month, said he has the experience needed to be interim mayor.

Velez took office less than two years ago. “You had people who had experience making the worst mistakes,” he said when told of his short time in office.

Regardless of who becomes mayor Torres’ story should serve as a cautionary tale for whomever fills the seat in the future and for government employees.