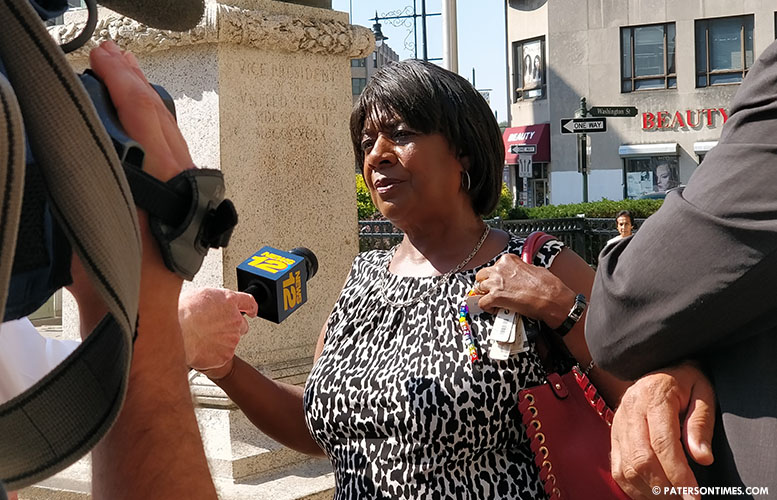 As she was walking into the historic City Hall building, Cotton said she had not spoken to the mayor about the transition during the weekend. She has spoken to business administrator Nellie Pou and law director Domenick Stampone, she said.

Torres was inside City Hall packing his bags.

“I became mayor under this dark cloud, but I’m going to make sure the light shines. Something good is going to come out of this,” said Cotton. She automatically filled the seat vacated by the mayor at 9 a.m. this morning.

Torres pleaded guilty to second degree official misconduct on Friday and accepted a plea deal that requires him to forfeit his office and serve five years in prison. He admitted to using public works employees to renovate a property leased by his family.

Cotton looks to sit down with high ranking city officials to chart a course for the city. She will continue to hold the council presidency and also serve as the mayor, effectively controlling two branches of the municipal government.

Cotton will draw her $43,000 council salary and the $119,000 mayor’s pay. She hopes to hold onto the mayor’s seat until a new mayor is elected in May 2018. Council members have 30 days to select someone to fill Torres’ vacated seat.

Some have called for a meeting to discuss appointing an interim mayor. Kenneth Morris, councilman at-large, has prepared a resolution to appoint an interim mayor even prior to Torres’ guilty plea.

Andre Sayegh, 6th Ward councilman, is fully backing Cotton. There were hints of a political battle on the horizon.

Cotton promised to work with her colleagues. She said she will continue to preside over council meetings, but will eventually have her vice president, Luis Velez, 5th Ward councilman, run the meetings.

“Our leadership is not going to be divided,” said Velez as he stood next to Cotton outside the City Hall.

Cotton promised transparency. She has not decided on changes to the administration Torres has left behind.

She vowed to clamp down on quality of life problems in the city.

Cotton, 64, a registered Democrat, was elected to represent the 4th Ward in 2012. She won re-election in 2016. She was narrowly elected to the city council presidency in July. Many of her colleagues knew she would become the mayor in the event of Torres’ conviction. She is the wife of former councilman Ed Cotton.