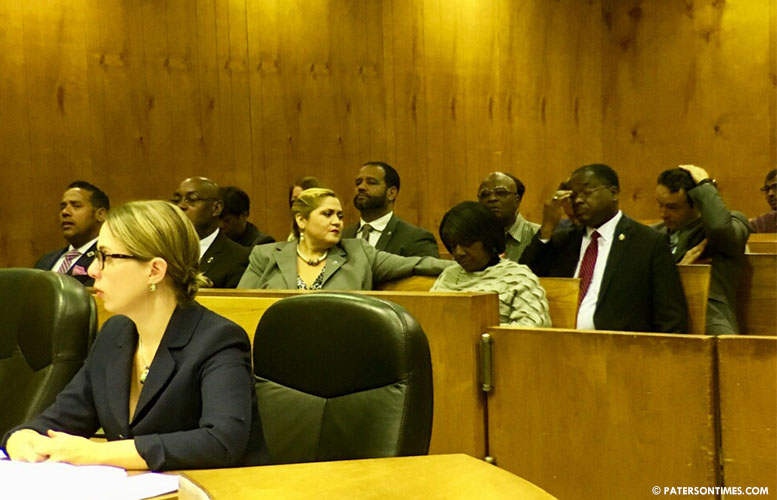 “As a matter of law, this statute just doesn’t apply in this scenario,” said Caposela speaking of the official misconduct charge. He said the charge is a second-degree offense that can lead to 10 or more years in prison and is often used to punish government officials for securing wrongful benefits. “Voting in a city council meeting, whether you like it or not, doesn’t constitute official misconduct.”

In that meeting, no one signed up to speak during public portion; however, the council president, McKoy at the time, allowed activist Ernest Rucker and resident Donald Lynch to speak. Both took aim at the publisher.

When Baldeo requested to speak council members appeared to ignore him and voted to close the public portion, according to records of the meeting.

“The grievance there is they spoke ill of him,” said Joe Del Russo, attorney for Sayegh, referring to Lynch and Rucker. “There is not a scintilla of evidence he [Sayegh] was involved in that communication.”

If every time a government official has to worry about being taken up on harassment and disorderly conduct charges for his actions and speech during a public meeting there will be a “chilling effect [that] would be overwhelming,” said the judge.

The judge said the criminal statutes were not designed to “control” the behavior of elected officials at public meetings. The judge’s dismissal of the charges brought visible relief to the council members. All seven accused council members were in the courtroom.

Baldeo left the courtroom after the judge dismissed the misconduct charges. Outside the courtroom, he said, “I predicted this was going to happen today. What he did today was politics over law.” He alleged both the judge and the county prosecutor had conflict and should have recused themselves.

“Two attorneys slammed me and the prosecutor just sat there and did nothing,” said Baldeo speaking of chief assistant prosecutor Mary Ryan. Del Russo argued for Sayegh while Richard Mazawey represented McKoy. He later made the same complaint to Ryan as she exited the courtroom.

Baldeo hinted at the possibility of taking civil action against the council members. Caposela mentioned civil remedies. “Are there civil remedies? There might be. I express no opinion on it,” said the judge.

Baldeo has filed more than 200 criminal complaints against city officials and others. This has led Sayegh to describe the newspaper president as a “serial litigant.”

“I’m not letting this go,” said Baldeo. “I still believe the criminal elements of this case still stands.”