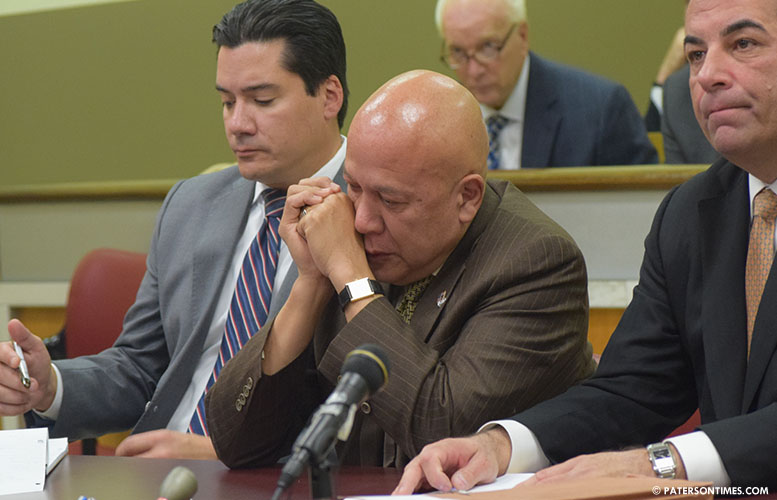 Torres will be eligible for parole one year and five days from today, according to his attorney John Azzarello.

“I wholeheartedly regret my lack of judgment or my judgment that led me up to these charges,” said a sobbing Torres before the judge. “I’m sorry. I embarrassed my family and friends. I’m sorry. I’m so sorry.” He pleaded guilty to second-degree conspiracy to commit official misconduct in September.

Some of his family members including his wife and a handful of his close friends, among them Eli Burgos and Idida Rodriguez, were in the courtroom at the Hudson County Superior Court.

Torres’ lawyers argued for leniency while the state argued for the harshest possible punishment. His lawyers presented 20 letters of support to the judge.

Azzarello argued Torres’ 32 years of service to the public should not be “swallowed” up by a six-month period when he “lost” his “ethical compass.”

The lawyers presented a new piece of information at the sentencing. Torres apparently told one of the supervisors to put the expenses incurred in the course of the renovation of his family’s leased property as board up cost.

Azzarello cited this as a mitigating factor that the funds were not coming from taxpayers.

“We’re just shifting who he is stealing from,” remarked Manis. He also explained most of the board ups are of abandoned properties and ultimately the city bears the cost of boarding up the properties.

Manis said Torres also misused $800 in campaign funds. Those funds were used to pay some public works employees. He has to pay that amount to the state in restitution as well as a portion of the $10,000 the ex-mayor and the three former public works supervisors must pay to the city.

Torres’ lawyers requested the judge send him to the Bayside State Prison in Cumberland County. The judge granted the request.

After Torres’ apology the judge took roughly a five-minute recess to deliberate. She returned and issued a five-year sentence.

Torres’ attorneys said the mayor could be out of prison in six months under the Intensive Supervision Program (ISP). The state plans to oppose Torres’ application to the ISP.

The judge sided with the state’s argument and imposed the five-year prison sentence.

“If we do not have trust in our public servants it diminishes democracy,” said Venable. She also mentioned the conviction of former mayor Martin Barnes.

Torres came into office in 2002 after Barnes received a prison sentence for corruption. Torres appears to have not learned from his predecessor’s mistake.

As soon as the judge pronounced the five-year sentence, a Hudson County Sheriff’s Officer placed handcuffs on Torres. His wife and family members began to weep and shed tears. “We love you Joey!” yelled one of them with broken voice.

“Torres thought he was above the law and is now on his way to prison. This prison sentence demonstrates that nobody is above the law, least of all public officials who brazenly abuse the authority entrusted to them,” said New Jersey attorney general Christopher Porrino.

Torres is barred from ever holding public office or employment.

The three public works supervisors Joseph Mania of Randolph; Imad Mowaswes of Clifton; and Timothy Hanlon of Woodland Park pleaded guilty with their boss in September. All three were sentenced to three-year probation. None of them will serve any time in prison.

“By unlawfully using on-the-clock city workers to assist with a family business, mayor Torres put his own interests ahead of the interests of city residents and compromised the integrity of his office,” said Elie Honig, director of the Division of Criminal Justice. “Public corruption takes many forms, but it always has the corrosive impact of undermining good government and public trust.”

The mayor and three public works supervisors were indicted by a grand jury in early March for using public resources to renovate a warehouse on East 15th Street leased by the Torres’ daughter Clarissa Torres and nephew Manuel Torres.

The niece and nephew formed a company called “Quality Beer” which leased 82 East 15th Street in an effort to open a beer distribution facility. The company could not secure the needed state permits to open the facility.

Mania, Mowaswes, and Hanlon at the behest of Torres supervised other employees to renovate the warehouse, according to authorities. The three supervisors allegedly billed taxpayers overtime while working on the mayor’s private projects.

Since fiscal year 2014 and up to their termination, the three men collect almost half-million in overtime pay, according to municipal records.

The four men were required to pay $10,000 in restitution, according to their plea deals.

Torres and the three public works supervisors would not have been caught without real estate developer Charles Florio.

Florio, who was involved in a permit dispute with Torres’ administration, hired a private investigator who captured video footage of the supervisors working at the warehouse. The private investigator, Harry Melber, also captured workers handling private jobs at the mayor’s Arlington Avenue home.

New Jersey attorney general Christopher Porrino has said the indictment unsealed on March 7th, 2017 does not cover the alleged work public works employees completed at the mayor’s Arlington Avenue home. Melber’s footage aired on NBC New York which ultimately resulted in the indictment of the three supervisors and their boss.

Torres and the three public works supervisors pleaded guilty on Sept. 22nd, 2017. Torres pleaded guilty to second-degree conspiracy. Prosecutors wanted Torres out of office after he took the guilty plea, but the former mayor’s lawyers argued to allow him to remain in office over the weekend.

Williams-Warren was appointed acting mayor by the city council.