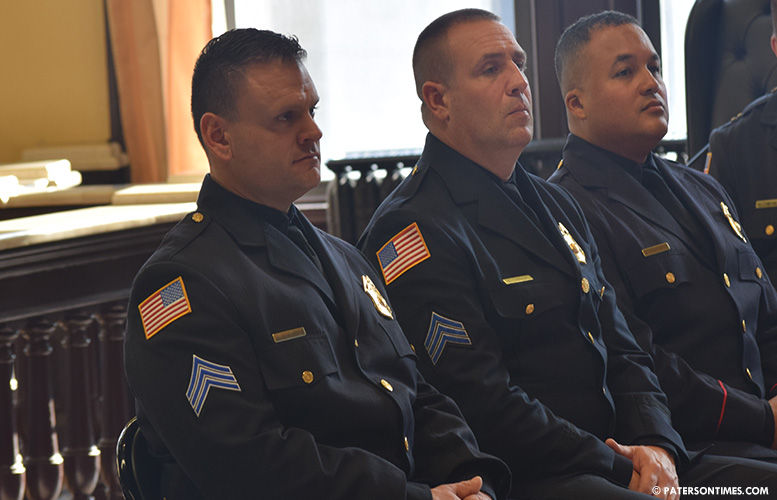 Three police officers were made sergeants and a fourth made lieutenant during a ceremony at City Hall on Wednesday afternoon.

Police sergeant Stephen Iacuzzo was promoted to the rank of lieutenant and officers Christopher Benevento, Edgar Taylor, and Eric Montoya were moved up to the title of sergeant.

“This is a day each of you have earned,” said police director Jerry Speziale.

“Leadership is all about trust. Good leaders are people trusted by followers. They make themselves available and accessible. Their professional motives are never in question. They build trust by earning trust,” said Speziale. “You know you’re on the right path by the amount of problems and suggestions that are brought to your attention every day. The day that stops is the day you need to look in the mirror. Because it means that people no longer trust you.”

“You’re making the leap to roles of greater responsibility and authority to serve your community. You will be required to perform the duties with honor, respect, and dignity,” said deputy police chief Ibrahim “Mike” Baycora.

“We need you to be part of our community,” said Cotton. She also told them to have compassion when dealing with residents.

“The people that you are promoting are good, hardworking people,” said deputy police chief Troy Oswald.

Oswald provided brief descriptions of the work each of the four men have done over the decade. For example, Iacuzzo worked in the Major Crimes Unit for the past decade.

“Solved a lot of homicide there?” remarked Oswald.

“Yes,” replied Iacuzzo. He is now in the Internal Affairs which investigates complaints against police officers.

Benevento worked out of the police radio room. Few times a month, he spends his own money to purchase things for the radio room that suffers from breakdowns.

Oswald said Benevento is a police officer, who goes to the store with his own money, to purchase things like cords and other equipment to restore the phone system following a breakdown.

Montoya has been targeting troublesome liquor establishments for the past three years. He is the department’s sole liquor law enforcer. His investigations have led to suspensions of a number of troubled liquor businesses over the years.

“They exemplify what our police department should be,” said mayor Jane Williams-Warren prior to administering oath to the four promoted officers.