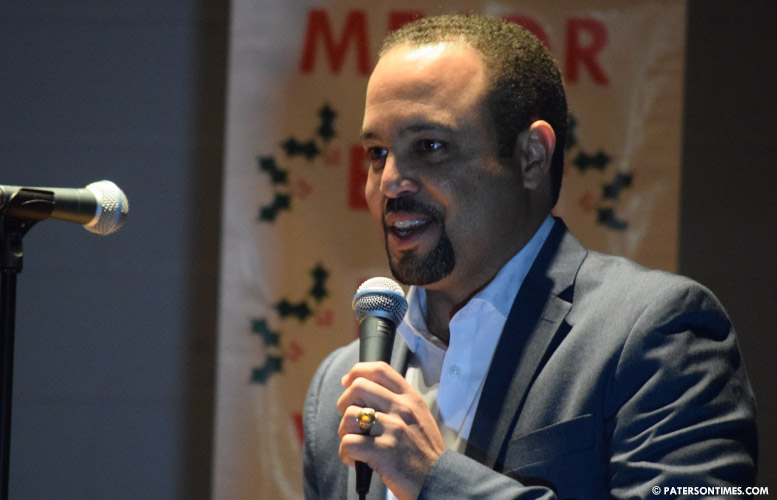 Rodriguez vowed to boost recreation spending from the $2.1 million in the current fiscal year budget to a historic high.

“We’re going to make the largest investment, in the whole history of Paterson, in recreation,” Rodriguez, 41, a Democrat, told the cheering crowd. His campaign estimated 700 people in attendance at 10 p.m. as many more walked in until well beyond midnight. The event which began at 8 p.m. served both as a birthday party for Rodriguez and a campaign kickoff fundraiser.

Even if the properties are conveyed at a nominal cost, the renovation cost is likely to be steep. Torres floated an idea to give residents loans using federal grant funds to rehabilitate the properties. However, that idea went nowhere. There’s also limited amount of federal grants available to the city.

“He’ll try to sell it to the poor people. People without houses. I think that’s phenomenal,” said Angel Medina, 61, of the 4th Ward. “He’ll be working for the people of Paterson.”

Medina plans to vote for Rodriguez next year. His five family members will also support the former school board member.

Another Rodriguez supporter said high taxes are pushing up rent throughout Paterson. “Taxes are so high,” said Gregory Tiburcio, 32, of the 3rd Ward, who hopes Rodriguez will be able to stabilize or lower them.

Rodriguez has to consolidate the Dominican community’s support behind him to defeat the other candidates. Dominicans, who are the largest Latino group in the city, are divided between Rodriguez and Mendez.

Mendez has been the highest vote-getter in multiple elections. He was seen as the de facto leader of the city’s Dominican community after winning a council seat in 2014. Rodriguez, who has been active in the political scene much longer, has put that in doubt.

Rodriguez came close to winning the 1st Ward council seat in 2012. He lost to disgraced councilman Anthony Davis by 46 votes.

Without mentioning Mendez by name, Rodriguez slammed the at-large councilman for receiving support from Torres’ brother Sammy Torres. Sammy Torres’ son Manuel Torres was a partner in the beer business that was expected to open at the warehouse the convicted mayor renovated using taxpayers’ money.

“What we’re not willing to do is put money in our pockets from people who have been linked to corruption in Paterson,” said Rodriguez. “We cannot go to the residents of Paterson and tell them that we’re going to be fighting corruption when they are financing our campaign.”

Rodriguez distanced himself from Torres in 2016 by giving up both his ceremonial deputy mayor and planning board positions. Those close to the former mayor at the time pointed out Rodriguez conveniently kept his $73,000 job as a telecommunication specialist at the police department.

Torres hired Rodriguez for the civilian police job in Aug. 2015.

Mendez has faced criticism for mixing the giveaways with his mayoral run.

“I heard a lot of bad things about him,” said Tiburcio, who is of Dominican heritage, of Mendez.

Quilvio Rodriguez, 37, of the 4th Ward, said Dominicans in the city are badly divided over Mendez and Rodriguez.

“I like him too,” said the 4th Ward resident of Mendez. He said at Dominican businesses the debate rages on over the two men. “I think Pedro’s going to win.”

Many of the former school board members’ supporters said they have made up their minds even though the election is six months away. When asked if there’s something another candidate could tell him to change his vote, Tiburcio replied, “No. I made up my mind.”

Rodriguez repeatedly used the collective “we” in his speech to refer to his run for mayor.

“We are running for mayor,” Rodriguez told his supporters. Not all attendees were Paterson voters. Many came from elsewhere to show their support for Rodriguez. His campaign appears to have made a conscious effort to have a diverse group of city residents at the kickoff event.

Towards the end of his brief speech, his supporters went into a “Pedro! Pedro! Pedro!” chant, as he declared his intention to run for mayor.